Today Could Be "Bananas", Cubs Among the Quiet Teams, Heyward's Greatest Catch, and Other Cubs Bullets Skip to content 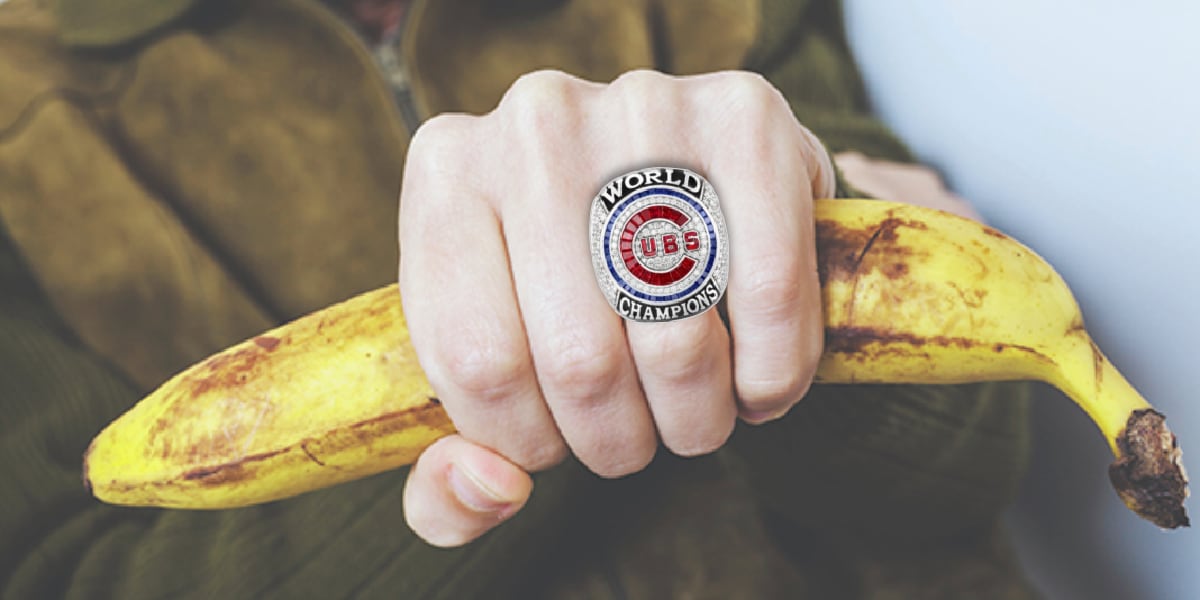 The big Obvious Shirts sale runs through today – it’s one item is 10% off, two items are 20% off, three items are 30% off, and four+ items are 40% off. They are stupid and fun, and they are the most comfortable t-shirts I’ve ever owned.

•   When deals are flying and it feels like the Cubs are doing nothing, I admit I feel that tightness and frustration. I know – and say out loud to others! – that you have to evaluate the offseason as a whole, after it’s completed, to really know how a team did. And even then, you have to actually see how it plays out on the field, too, obviously. But WHEN IT’S HAPPENING, like last night, it just gets you riled up. I can’t help it. After a sleep, though, a look up and down the league to see how many teams also didn’t actually do anything thing weekend, and a refresher on just how large the free agent class still is, I can take a step back and remind myself that a productive offseason can still lay ahead. Up to the Cubs to make it happen, and I’ll beef in March if they haven’t. But that’s still many months (and a lockout, and a totally different CBA) away.

•   (Agree with Michael, though, that the Cubs could be shooting themselves in the foot by not resolving the Willson Contreras issue until after the CBA is settled.)

•   Meanwhile, the morning reiteration that today could be as wild as yesterday or more:

There is expected to be a frenzy of moves today. In words of 1 executive today will be “bananas.” Becuase physicals and contract language needs to be finalized b4 potential lockout midnight Wed into Thurs, today is seen as close to a deadline to finalize deals.

•   The market is what it is. The Cubs can prefer to wait until after the CBA all they want, but if players of preference are insisting on signing pre-CBA, then you have to make a decision on how much you actually care about getting the players you want. That’s going to be tested today for the Cubs, even as I’ll say all that stuff in the first bullet. If a ton of attractive targets go off the board today and the Cubs sit idle, it’s going to be maddening. Understandable come March when we look back? Maybe. Maybe. But for now, you can only sign a guy when he’s available to be signed.

•   Enjoyed this FanGraphs write-up of the Marcus Semien deal, with a ZiPS look at how Semien projects over the next seven years. Even as a later breakout, Semien does project to still be a very good player in his 30s, commensurate with his 7/$175 million contract. The challenge, though, is that he is extremely likely to provide disproportionate value over the next two years, so the onus will be on the Rangers to really compete at a high level immediately. Otherwise, they’re not likely to get a ton of actually-impactful value from the deal.

•   A stray note on the Byron Buxton extension. The MVP bonuses are even more extreme than we initially thought – he gets huge dollar amounts (these are way larger than usual) every single year he finishes in the top 10 of voting:

•   As a player, you never want to put much of your expected compensation into bonuses for obvious reasons, but if Buxton was already happy enough with the $100 million guarantee, then it makes sense that he – maybe among all players – would want his next tier of dollars to come from MVP voting. All he’s gotta do is stay healthy enough to play, like, 120 games in a season and he could get into the top 10.

•   Cyber Monday is here at Amazon, which means you can peruse virtually everything and get a deal. I’d been waiting for Black Friday/Cyber Monday to get a new TV, and now it’s a done deal. #ad

•   If you’d asked me what’s the best Jason Heyward catch you’ve ever seen, I would have an answer at the ready immediately. For reasons that will be apparent if you remember the catch, I wouldn’t have thought it would ALSO be his *favorite* catch. But apparently it was. The breakdown of a PARTICULARLY absurd Jason Heyward catch: