Codi Heuer and the Importance of Spin Efficiency Skip to content

By now, most of us are at least aware of pitcher spin rates and how important it can be to maximize RPMs to miss more bats. The mid-season crackdown on sticky substances used to manipulate the ball, and the resulting drop in spin rates across the league, really underscored much of a thing it is right now for big league pitchers. But it’s important to remember that raw RPMs, alone, don’t tell the entire story.

In the Cubs Bullets this morning, Brett shared an article from Beyond the Box Score that aims to explain the concept of spin efficiency (aka active spin). And although there’s much more to it than this, the bottom line is pretty easy to understand: Spin Rate, alone, isn’t everything.

Depending on spin efficiency (the percentage of spin rate that actually contributes to pitch movement), a lower RPM pitch could actually be more effective than the same pitch at a higher RPM. It just depends on things like arm angle, grip, seam placement, etc.

For an example of how this works in real life, check out this 10-second clip below. All seven of these pitches are identical 90 MPH, 2300 RPM fastballs. But the pitch on the far left (red trail) has a 40% spin efficiency while the pitch on the far right (green trail) has a 100% spin efficiency. You’ll immediately notice that the fastball on the far right has that famous “rising” effect, a very desirable (and difficult to achieve) characteristic for top-of-the-zone fastballs. It can be a HUGE difference:

In other words: Spin efficiency can help achieve the effects we’ve otherwise attributed to pure spin rate. Got it? Okay, here’s the Cubs connection.

After reading through that article this morning, I decided to take a look at the spin efficiency leaderboards at Statcast to see where some of the Cubs ranked, and I found one interesting case: Codi Heuer.

Here’s a few examples of the rising effect a high-efficiency spin rate has on a Codi Heuer fastball at the top of the zone:

Codi Heuer, Overpowering 98mph Fastball…and "this game is too easy for me" K strut. 🔥 pic.twitter.com/b6YUCpx6lN

This White Sox pen is gonna be sick. pic.twitter.com/6XF8glyUSJ

So why do I find that encouraging? Mostly because for however much success Heuer has already had in his career (3.56 ERA overall, 3.14 ERA with the Cubs), I believe he has another level to his game. There’s a reason he was the piece that put the Craig Kimbrel trade over the top and I don’t think it’s because he has solid middle reliever talent.

This guy has top-of-the-bullpen potential and I think the key to unlocking it lies within the usage and placement of his fastball, both of which should be informed by his spin efficiency. Fortunately, it seems like the Cubs are all over it.

Before coming to the Cubs this season, Heuer was throwing his fastball 53.1% of the time. But after the trade? The Cubs had him throwing it 61.2% of the time. And he wasn’t just throwing it more often, the location has started to drift up, too: 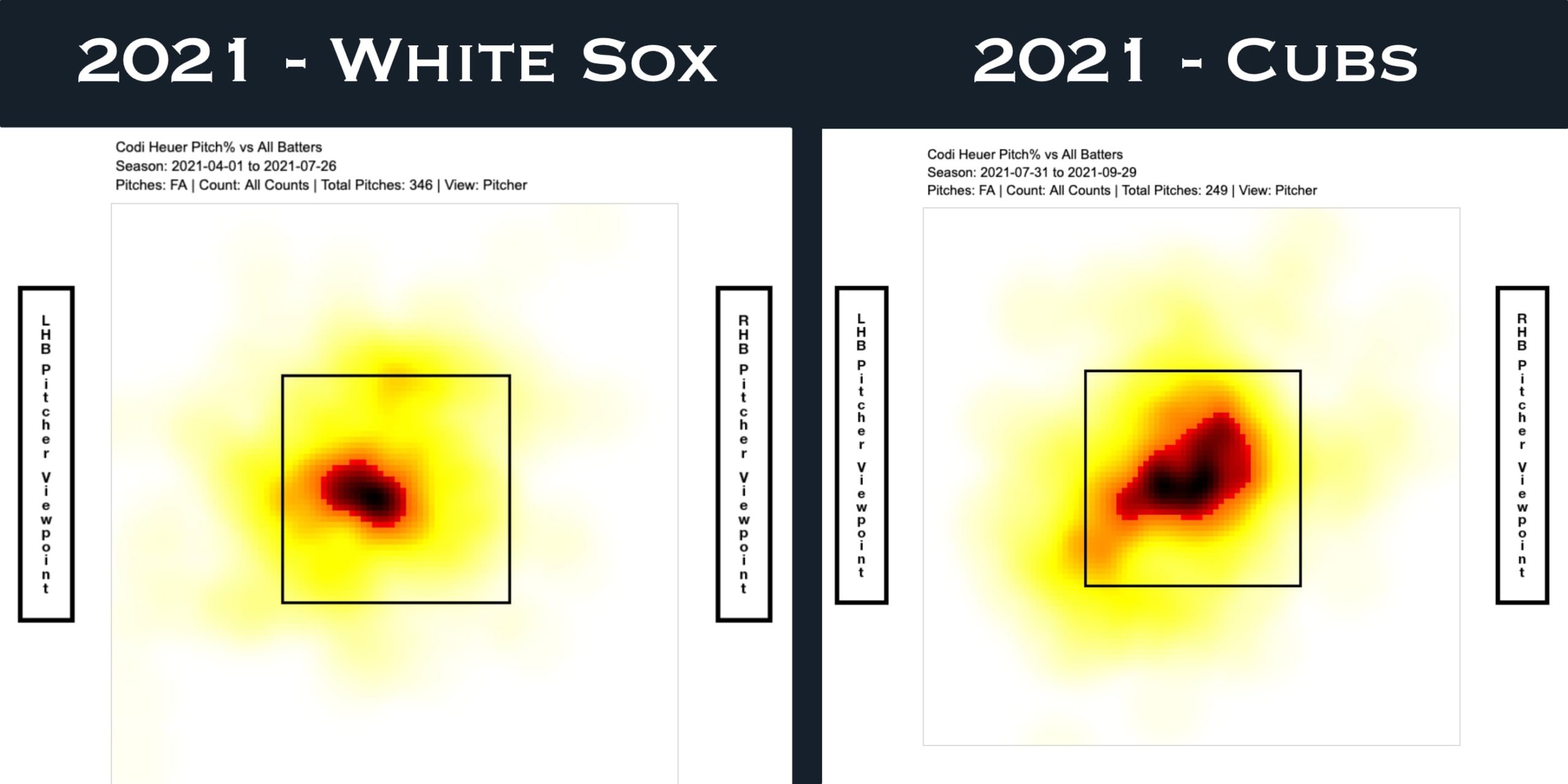 So far, that hasn’t resulted in a better strikeout rate. In fact, his strikeout rate with the Cubs was shockingly low relative to his time on the South Side. But I think that will improve with time if he maintains this approach. (Recall also that the Cubs were working with him on the shape(s) of his fastball, too.)

In the meantime, there were a number of other positive effects of throwing more fastballs at the top of the zone:

His line drive rate, hard contact, average exit velocity, and barrel rates are all down, while his ground ball rate, infield fly ball rate, and soft contact are all up!

So maybe the strikeouts haven’t come along just yet, but batters are making incredibly poor contact against the somewhat new-look Heuer, who is perhaps taking advantage of a high-efficiency spin rate to attack the top of the zone (among other things). And if he can fine-tune his approach to get a few more whiffs, perhaps blending what he did with the Sox and Cubs, we could be looking at the beginning of a very good reliever becoming a dominant reliever.