One Year Ago Today, the Cubs Traded Yu Darvish to the Padres - Do You Think Differently About It Now? Skip to content 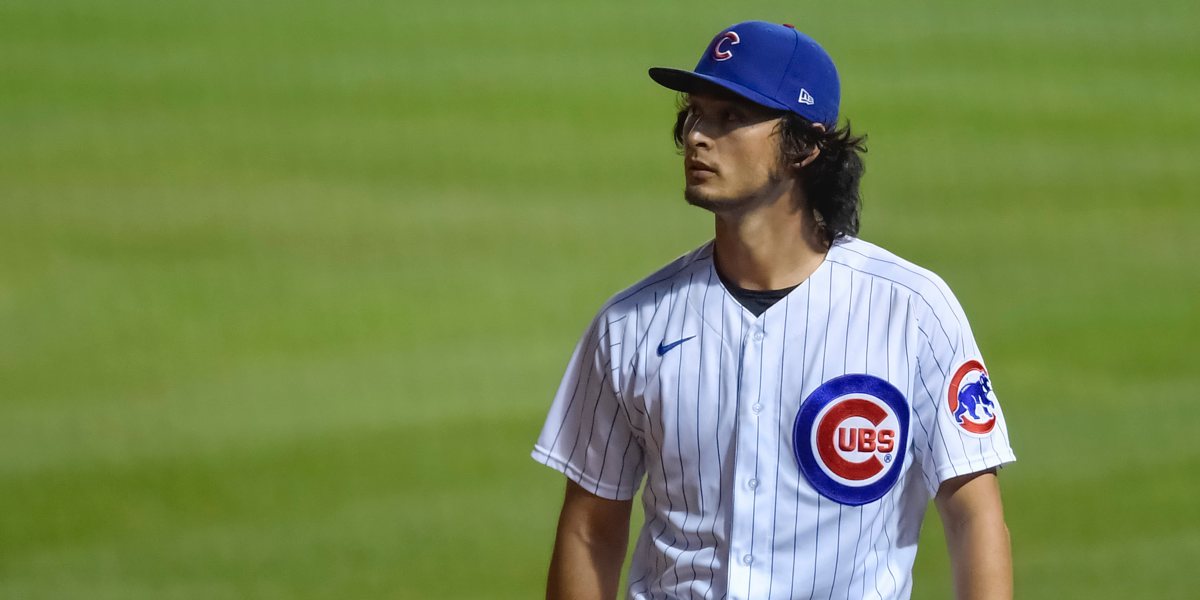 There is not a thing wrong with being upset about a trade when it happens. The very nature of following sports involves developing attachments to players, so it is only natural that their departures affect us on some level. We know at our highest level of consciousness that we are being ridiculous, but that’s part of price of entry into a level of fandom that also comes with some seriously sweet emotional payoffs.

We saw it at the Trade Deadline this year when so many long-time favorites were sent out. So many players with whom we’d developed about as deep a connection as one can develop at a distance with someone you’ll never actually know. You can try to drop all the logic bombs on yourself about the wisdom of the trade or the long-term value or whatever, but in the moment, you’re going to feel what you feel. And if that feeling is pain or sadness or anger, that’s fine. Do you.

That’s why it’s also fair to give yourself the same grace, months later, to look back and see what happened through a different lens. It doesn’t make you a hypocrite or a meatball or a fairweather fan if you go from hating something on Day Zero to respecting it on Day 150 to downright digging it on Day 365.

It just makes you a passionate sports fan who also happens to be human.

One year ago today, the Chicago Cubs traded Yu Darvish and Victor Caratini to the San Diego Padres for four very young prospects and Zach Davies.

Context is important – the pandemic had crushed the sport’s finances, the Cubs were coming up on a year when they were going over the cliff in controlling their core positional group, and the farm system was pretty desperately in need of talent infusions – but I don’t want to mince words here: the reaction to the deal was overwhelmingly negative. I look back at my main write-ups and I can remember where I was, emotionally and intellectually, at the time. I was pissed that there was a clear financial component to the trade, I was pissed that the Cubs were turning 2021 into a “roll the dice in the first half” year (at best), and I was confused about the Cubs targeting such young/high-risk prospects in the deal.

Also? Yeah, I really freaking liked Yu Darvish. I liked the person he was, the entertainment he provided on and off the field, and I loved watching him pitch. There aren’t a lot of pitchers who do it like he does, and his run from mid-2019 through the pandemic season was as good as it gets. Knowing in the moment of that trade that I’d likely seen him pitch for the Cubs for the last time is the kind of bummer you can’t rightly sort out in a 24 hour period. You have to have the distance to yield to the context. And, of course, to get more data.

We’re a year removed now from the trade, and it’s pretty hard to argue that the combined impact of time (to “get over it”) and data (to analyze where things stand) have indeed yielded an entirely different perspective on the trade. It was … probably … a great move for the Cubs.

Primarily, the goal for the Cubs was to infuse the farm system with more talent. When you acquire four teenage prospects in a deal like that, the reality is that you already know at least two are probably never even going to progress to the upper levels of the minors. You hope, realistically, that two can at least become legit prospects. If you start hoping for big league impact, then you’ve already started dreaming too far down the road.

It’s way too early to say that Yeison Santana and Ismael Mena have already washed out, even after their disappointing 2021 seasons. The pandemic undoubtedly affected different players differently, and each deserves at least a second full post-pandemic season for us to really say we know much about their futures. Santana will be just 21 next year. Mena will be just 19.

On the flip side, the Cubs saw huge breakouts from both Owen Caissie and Reggie Preciado, who had entered the Cubs system as high-upside top 20 types, and now find themselves top 10 types in a much, much deeper system. Your hopes and expectations should stay in check until we see more from them in full season ball (Caissie is only 19, Preciado is only 18), but inasmuch as they could very quickly establish themselves as legit prospects, the duo did it in spades in Complex Ball.

In their primary objective in the trade, it’s hard to say the Cubs didn’t succeed. The farm system definitely got a meaningful boost from the trade, and, looking back, if the choice was between one fringy top 100 type and the four that the Cubs got instead, they probably chose correctly. (It’s never been clear that it actually WAS a choice for the Cubs, by the way, as the Padres were reportedly among the only teams really pushing for Darvish, and they held the line on their top prospects. But even if they’d offered up then-top pitching prospect MacKenzie Gore, that might’ve turned out to be a disaster after he seemingly developed the yips.)

Secondarily, the goal for the Cubs was to move out the second half of Darvish’s contract so that those funds could be repurposed. That didn’t happen in 2021, obviously, but the near and long-term flexibility the Cubs have right now is fully on display. You can’t and shouldn’t think about Marcus Stroman as having “replaced” Yu Darvish, but they are on a pretty similar deal for the next two years (Darvish is a free agent after 2024, Stroman can opt out after 2024). And of the two, for the next two years, I think you have to bet on Stroman (five years younger than Darvish) likely being the better pitcher.

In his year with the Padres, Darvish dealt with injury issues, saw his homer troubles return, and saw his fastball velocity dip back down to where it was a couple years ago. Overall, he was roughly a league average pitcher for his 166.1 innings, though troublingly, he had a near-6 ERA from mid-June on. His second half was a disaster, and who knows whether that was meaningfully related to injury issues, to sticky stuff enforcement issues, or to something else. Were he on the Cubs, we’d be writing about concerns going forward much in the same way we’ve offered concerns about Kyle Hendricks. Maybe that would’ve played out differently if he WERE on the Cubs for 2021, but as things stand now, you can’t look at Darvish’s 2021 season – the performance and the projections from here – with a whole lot of regret.

The other big leaguers in the deal merit a little mention, too.

Losing Victor Caratini wound up being a huge blow from the Cubs’ perspective, given the constant flow of back-up catchers the team deployed in 2021, and how much it required Willson Contreras to grind beyond what was a reasonable expectation. That last part is why losing Caratini still stings, but let’s be clear: it was a terrible year for Caratini in San Diego. Not only did he hit a mere .227/.309/.323 (72 wRC+), but he rated out as a negative value defender.

Funny and silly thing? The Cubs’ rotating cast of back-up catchers was worth the exact same WAR in 2021 as Victor Caratini (-0.7).

The Cubs also got Zach Davies in the deal, and that was obviously a terrible outcome. Davies not only pitched to the worst results of his career by far, he wasn’t even in a position to be dealt at the deadline. What can you even say on the positive side? It was one year and now he’s gone? He helped improve the Cubs’ draft pick for 2022? Is that something we’re saying out loud?

Of course, if Davies’ performance is the only part of the deal to which we can point as an obvious negative, then the deal clearly went pretty well. Even at the time of the trade, I barely even discussed Davies, writing that, “Davies’ inclusion is more about salary and wanting to shift a pitcher from one team to the other, so while I’m not ignoring him, he doesn’t get much focus in terms of what the trade was ‘for.'” I didn’t realize how right I was about that particular immediate reaction, because I would later go on to talk myself into Davies actually being a really interesting piece for the Cubs, and maybe a sneaky important part of the trade. Whoops!

On the balance, when you look back on this trade a year later, you can see what the Cubs were trying to accomplish and how well they pulled it off.

Even if the post-pandemic budget hadn’t more or less dictated that Jed Hoyer had to unload some salary before the 2021 season, you could still conclude that this was a savvy move. Darvish and Caratini’s presence wouldn’t have made the difference between a playoff team and whatever the Cubs actually were in 2021, and I’m not sure either would’ve been projecting all that well for 2022. So instead of that situation, the Cubs have at least two really compelling young prospects in the farm system, additional financial flexibility (and a Marcus Stroman signing in the rotation), and the number 7 pick in the 2022 draft instead of, what, number 9?

I’m being a *little* bit cheeky there at the end, but that’s part of what having an additional year of distance gives us. The ability to set aside the emotion a little bit, and take a more analytical – but also somehow lighter hearted – look at a deal.