The rumor mill has mostly wound down for the new year, with an eye toward CBA negotiations in early January (we all desperately hope). But there’s one interesting nugget floating out there worth some discussion today.

Buster Olney mentioned on the Michael Kay Show, via MLBTR, that the Yankees have talked a little bit internally about the idea of trading for Oakland A’s third baseman Matt Chapman and moving him to shortstop. We know the A’s are wide open for business on arbitration-level players like Chapman, and we know the Yankees want to add a shortstop to their current mix (and the rumors are that they don’t want to go ultra-long-term on a deal for a guy like Carlos Correa). So, at a superficial level, it makes sense that they would at least talk about something like this internally. (As for why they might leak those discussions to a reporter, well, that’s another thing that I’ll get to in a moment.)

Chapman, 29 in April, is known as the gold standard of defense at third base right now, and if you were ever going to consider a guy for a move up the defensive ladder, he’s a guy you might think about. If he could be above-average at short, is that worth more than elite at third base? I’d need to bust out the TI-85 for that one, but I figure it’s probably somewhere in that range. And if you’re a team like the Yankees, where you feel very set at third base but very unset at shortstop, maybe it’s all the more worth this consideration, especially if you happen to be a good trade fit with the A’s.

But could he actually be above-average at shortstop? Boy that’s hard to say with certainty just by watching his highlights, you know? Chapman was a third baseman in college, so it was kinda like the decision on his path had been made long before he reached pro ball. The A’s gave him a tiny bit of action at shortstop at Double-A in 2016, but it didn’t last for whatever reason. When he arrived in the big leagues in 2017, the A’s were committed to Marcus Semien at shortstop, so it didn’t make any sense not to just park Chapman at third base and love what he could do there. That was probably the end of any considerations, so it remains an open question on what he could actually do at shortstop.

Kind of risky to make a trade like that for meaningful assets, right? I guess we’ll see how serious the Yankees get coming out of the shutdown.

We’ve talked very generally about the possibility of Chapman as a buy-low option for the Cubs (at third base, but, hey, if the glove could be great at shortstop … ), but my concern has always been on the other side of the ball. His offense has been in a steady and swift decline since his early peak: 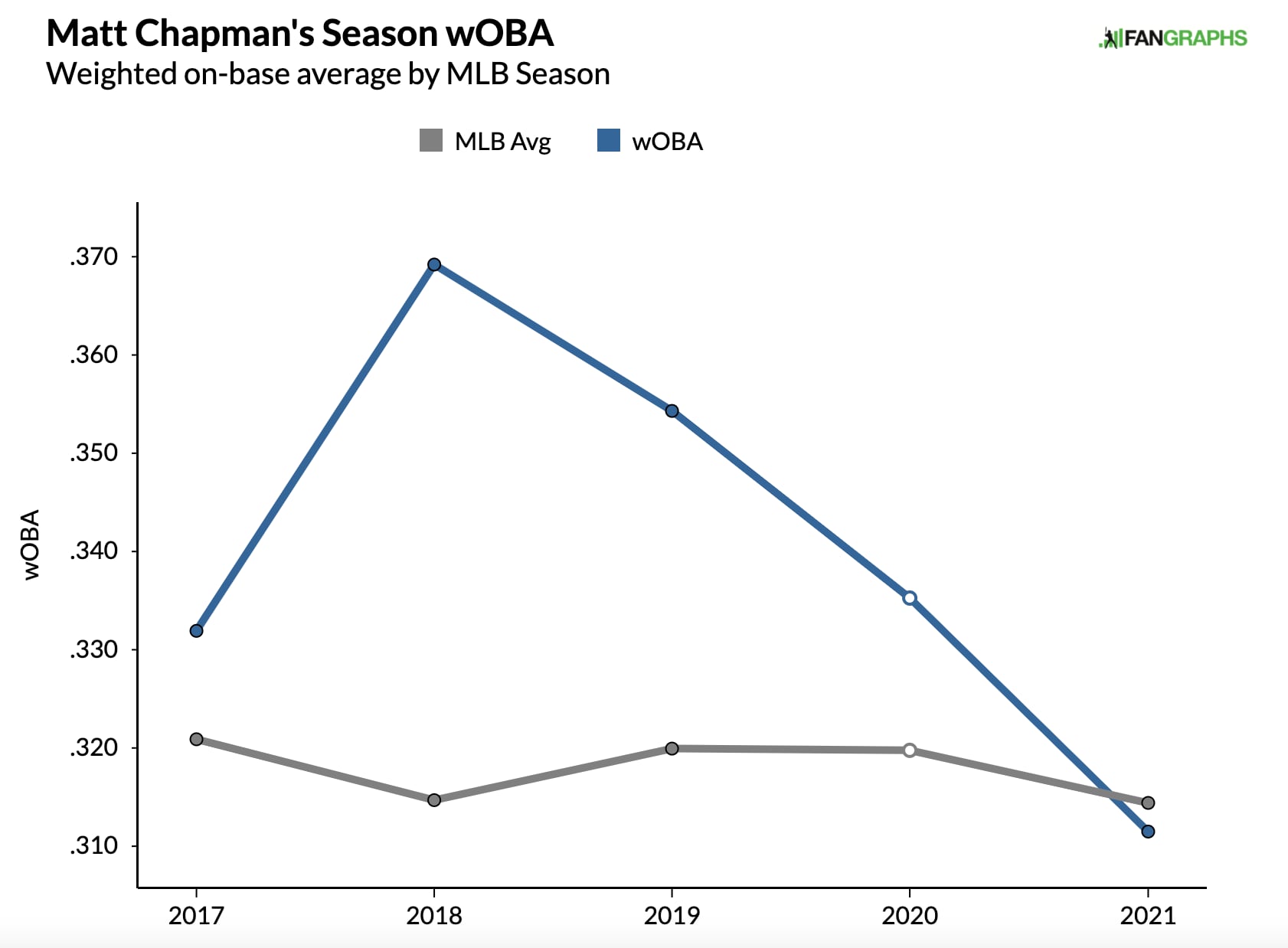 Maybe 2021 was an outlier and he bounces back to something a bit above league average in 2022. How much is that actually worth? His $9.5 million projected arbitration salary is certainly reasonable, but how much is it worth in trade? Should the Cubs be giving up prospects right now for two years of Chapman? You know they like the two years part, but you also know they hate the prospects part.

I’m not sure I’d want the Cubs involved unless the A’s were borderline desperate, and no team out there was jumping (neither of which I can actually see happening).

1.) If Chapman were legitimately viewed by teams – the Yankees and/or others – as a legit quality shortstop option on the market, that would add another potentially impactful type to the mix (albeit one that requires a trade return). Maybe that means the Cubs consider it, or, more likely, maybe it means another shortstop-needy club fills their need with Chapman, leaving other free agent options out there for the Cubs. It would probably be a net good thing if this is real, regardless of whether the Cubs get involved. (Boy does it suck that the Rangers took TWO of the top shortstops off the market.)

2.) Teams like the Yankees, of course, could simply be planting seeds in the minds OF THOSE very free agent shortstops, though. “Hey, we probably don’t need to give you a massive contract, because we can just trade for a couple arbitration years of a guy we might like even better.” In other words, this could just be some Yankee negotiating through the media/leverage creation. I still have my doubts that they’re actually out on guys like Carlos Correa and Trevor Story.

3.) It’s also just possible that the Yankees wanted this out there as an early heads up to the A’s: don’t trade Chapman immediately when the lockout ends, at least not before you talk to us. It could be that simple.