The Value of a Really Average Pitcher, Sticking to History, Poaching Players, and Other Cubs Bullets Skip to content 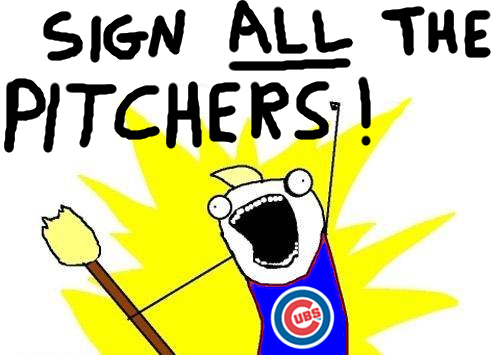 Going to my first sports event in a long time, which is arguably not the best timing, but I am vaccinated, boosted, and I had the dang thing last year. I gotta have some pretty good antibodies going at this point. Hopefully the Bulls make it worth it.

•   Kevin Goldstein’s latest chat includes a number of interesting bits, as it always does. Among them: front offices almost uniformly weight catcher value much more than public metrics do (WAR, for example); offseason “buzz” building for certain prospects does tend to come from somewhere legit, though it often precedes people wildly underestimating the wide variance in outcomes for even the best prospects; Triple-A team location is sometimes a very important deciding factor when veterans sign minor league deals (no offense to Des Moines, but I’m gonna say advantage to some other areas); intangible clubhouse value is real; and much more.

•   One of the most interesting questions was how much a pitcher who gave you 300 innings with a league-average ERA would be worth in free agency. Goldstein speculated $15 to $20 million, which – he’s doing a live chat and reacting on the fly – I think is really low. While many organizations could back-fill their rotation with inexpensive vets and call-ups, how many of those guys can actually provide league average ERA? Certainly not enough of them to consistently combine for 300 innings, right?

•   In free agency this year, league-average-ish starters – with potential to be a little better or a little worse – were getting those multi-year deals in the $12 to $15 million range (Matz, Desclafani, Gray, Wood – those types). But those guys might give you 180 innings or they might give you 100 innings. If you *knew* you were going to get league-average results over 300 innings – that you could count on that definitely happening, and apportion the rest of your innings accordingly – I think that could be worth at least twice what those guys were getting, right? Maybe more, since it’s consolidated in just one roster spot?

•   With the Atlantic League dumping the move-the-mound-back rule experiment from MLB, I want a share a reaction that I think really sums up the issues well, and it’s from Cardinals pitcher Adam Wainwright:

This is a good move. “Hey free agents… come play in our league even though the length you’ll be pitching isn’t the same as the MLB. It’ll be fine… I’m sure you can adjust and still get signed.” Yikes. A baseball is meant to be pitched at 60’6″. And that’s just the way it is

•   That reaction sums it up perfectly to me because it touches on the two most important angles. Wainwright is exactly right that one of the biggest problems with the rule change was that it was asked of indy ball players who are trying to get signed. That just seems really unfair. I know that MLB didn’t want to ask it of affiliated players without testing it, and I don’t know exactly how you bridge that gap if you actually want to play with the distance. And that’s the other angle, with which I completely disagree with Wainwright: it might be the case that 60’6″ is still the right distance for baseball, but the whole “we do things the way we did them over 100 years ago just because” is not really a persuasive point. It can’t be if this sport wants to continue to adjust and improve. I am pretty much done with hearing “but history!” as an argument for any rules change stuff. Either you can make a good argument on the merits, or you can’t.

•   To that point: the DH is now nearly 50 years old. Suddenly, it *IS* history. That’s what happens with rules changes that work out.

A surprising volume of answers to this one. I thought it would kinda be Corbin Burnes and silence. He was, indeed, the most popular response, but lots of Hader, Arenado, Hayes, Reynolds, and, of course, Castellanos (but he's a FA, so that's not poaching!).

•   Brewers bullpen coach Steve Karsay is stepping down due to family considerations after three years in the role.

•   Portable bluetooth speakers, scales, and more are your Deals of the Day at Amazon. #ad

•   The Blackhawks won it in overtime last night (Lukas Reichel’s debut) on this walk-off goal, which, um:

Hawks win! They don’t ask how, they ask how many!#Blackhawks pic.twitter.com/BT6zsecjRh