The Most Pivotal World Series Plays Heavy on Cubs, Stro on D, Cubs Quality Pitching, and Other Cubs Bullets Skip to content 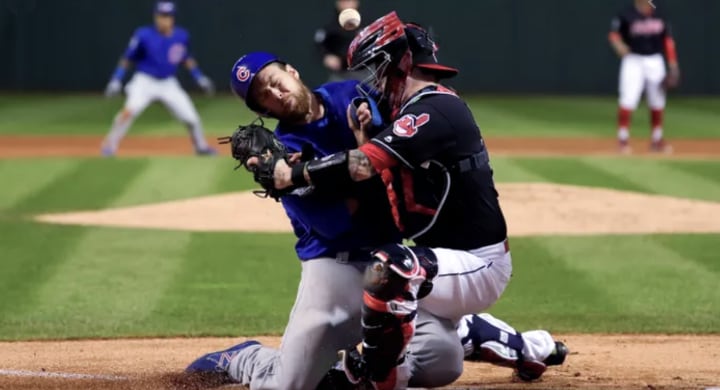 I just want to climb all of the snow mountains around town, where the plows have built them up. But I also don’t really want to be cold. Or fall.

•   This is a really interesting thread on Twitter, exploring the (statistically) most impactful plays – in terms of winning or losing the whole thing – since the Cubs’ World Series win in 2016. It’s like Win Probability Added, except it has another layer: Championship Win Probability Added. Fun. Right off the bat, you’re reminded how enormously huge simple outs are in a potentially decisive inning of a decisive game seven:

A thread of the top-15 most pivotal plays since 2016, measured by Championship Win Probability Added (cWPA).

•   With the lead runner at third in the 9th, that’s a huge groundout right there to end the inning, and give the (then) Indians a chance to walk it off in the 9th. One of the 15 biggest plays (by this metric) of the last six years! (And yes, Javy Báez’s attempted bunt with two strikes the at bat before shows up even higher on the list. Thank God they won that game, man.)

•   Check out the full thread for the plays, though there are some more obvious ones in there (for example, Jorge Soler’s big three-run homer this past World Series). The Ben Zobrist double is number three, behind the Howie Kendrick game seven homer in 2019 (oh, fair enough, I suppose). But look at number one:

•   I knew that was going to be number one when I started perusing the list, because when you’re down two in the 8th inning of a game seven, with two outs, tying the game up is an absolutely enormous swing for that game (and, therefore, the championship). That Rajai Davis swing made the Indians nearly 40% more likely to win the championship than they were before the pitch. What a heartbreaker for them, eh?

•   We’ve seen the highlight clips of Marcus Stroman playing some middle infield during warm-ups and the like, and we’ve joked about his ability there, but he’s not kidding:

•   Stroman believes he could step in and be an above-average defensive shortstop or second baseman at the big league level right now. We’ve seen all the defensive clips, and some tiny versions of the work he does in warm-ups (plus we know he has the arm for it), so I’m not sure he’s wrong. Let’s just hope the Cubs never need him to do it in-game.

So, Stroman could moonlight as a shortstop. https://t.co/cd6OYALJMj

•   This is pretty fascinating:

THIS JUST IN: Allowing hard-hit baseballs is bad for your ERA. No duh. But how bad? As a single variable predictor, xwOBAcon (or as we called it w/ the Reds, "xDamage") is surprisingly strong.

•   I’m not sure exactly what it *MEANS* for the Cubs, but here’s what that chart is saying: at the minor league level, they were something of an outlier in having their expected damage given up not match their actual damage given up. By this metric, you would’ve expected them to perform as the 7th or 8th best organization on the pitching side, but instead their ERA was 8th worst. It’s a pretty large sample when you’re incorporating the whole farm system, but as you can see there’s still a lot of imperfection/noise in there. Still, is there some signal? And if so, what would it be? Cubs had some rough defense? Didn’t use optimal defensive positioning in the minors as well as other orgs? Something about their ballparks? Just a ton of bad luck? Also, notice how much the Cardinals are even MORE of an outlier in that direction.

•   In any case, it seems to me to be a good thing that the Cubs’ minor league pitchers were among the league leaders in expected damage last year?

•   We’re gathering up the best Super Bowl promos for the sports betting crew if you want to peruse.

•   A wild report that we’ll be digging in on shortly, combo Cubs-Hawks stuff:

Fascinating development: #Cubs assistant GM Jeff Greenberg is being considered by the Chicago Blackhawks for an executive position, per @FriedgeHNIC, according to @JeffMarek’s Monday morning segment on @SiriusXMNHL. @MLBNetwork @NHLNetwork

•   This is just an incredible troll, and the replies were hilarious:

•   That’s why I remind myself regularly that I am #NotAScout. Otherwise, I might be out there trying to critique the swing of literally Mike Trout.

•   If you missed the big news last night, the Cubs are reportedly in talks to develop their own streaming service.

•   Board games, memory devices, and more are your Deals of the Day at Amazon. #ad