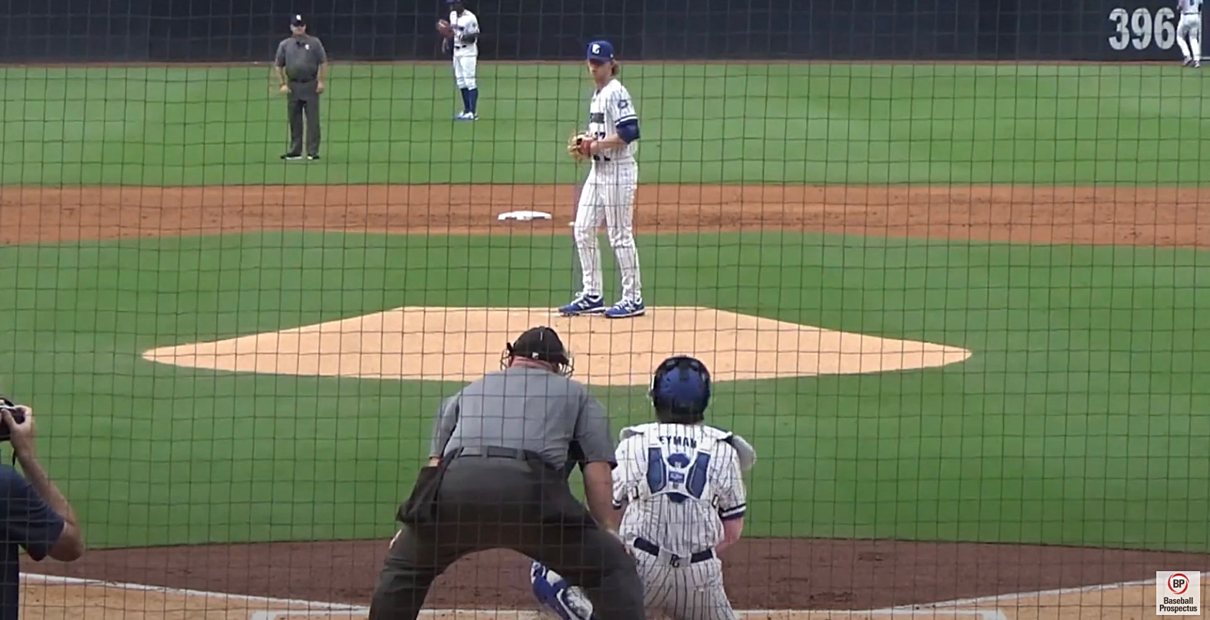 Since this is three for three, I want to put the reminder up top: the mock drafts that take place before the season begins are coming before the most important information we’re going to get (i.e., the most recent health and performance). So when the same player is mocked to the Cubs three drafts in a row, that’s less about hearing of specific interest or spotting Cubs scouts following a player closely, and is more about sorting out the pre-season tiers in the draft.

OK, throat-clearing aside, for the third mock draft in a row – joining MLB Pipeline and Prospects Live – the Cubs are landing the top pitcher in the draft, high school righty Dylan Lesko.

Going ahead of Lesko in the first mock draft at Baseball America, you have the trio of positional high schoolers who get discussed the most (Druw Jones, Termarr Johnson, and Elijah Green), and then three of the college bats who are frequently in this area (Brooks Lee, Jacob Berry, and Jace Jung). Then, Lesko to the Cubs, where the praise is EFFUSIVE:

Scout’s take: The Cubs look to add more pitching depth with Lesko, the best pitcher in the draft. It’s tempting to take the lefthanded college bats of DeLauter, Gavin Cross, or Brock Jones over a high school righty, but I don’t think you pass up Lesko and his type of stuff. He possesses the rare combo of a plus-plus fastball, plus curveball, and plus-plus changeup to go with an exceptionally smooth delivery and ability to command all three pitches. Lesko makes it look easy at the age of 18, and fills up the zone. Gatorade national player of the year as a junior? Let’s not overthink this one.

Carlos Collazo’s take: Yeah, I am not sure what the criticism of Lesko is beyond the fact that he is a high school righthander. At the moment the top pitching prospect in baseball—Orioles righthander Grayson Rodriguez—came from that demographic as well, so it’s not like you never hit on it. It’s such an impressive overall tool set, track record of performance, body, delivery and arm stroke. His changeup is one of the best changeups I’ve seen from a prep arm and he has the fastball life and feel for spin you want to see as well. At this point it’s hard to see another arm in this class coming off the board before Lesko does. He’s ahead of where Jackson Jobe was sitting on boards at the same time last year as well—I wonder what his true ceiling in the draft is going to be.

The draft is clearly very heavy on positional prospects at the top, but the opportunity to get the best pitcher in the draft – if Lesko remains in that spot through his season – and a guy who has true ace potential, it might just be that by pick seven, it’s impossible to pass on Lesko. No, high school pitchers are not a lock to stay healthy, quality prospects through the journey in a farm system. They are the risky subset of draft prospects. HOWEVER, sometimes that’s where you have to go in order to get a tip-top pitching prospect.

More on Lesko if you missed it previously:

I don’t know that timelines will play too much into the Cubs’ choice here – even if they decide they must be highly competitive in 2023/24, you can’t guarantee you’re finding a contributor in the 2022 draft no matter who you take. And even if you go with a high school arm like Lesko, it’s just as conceivable he could wind up a trade piece that puts some deal over the top at midseason.

As for the player, though, it’s been clear through the first set of rankings and mocks that high schooler Dylan Lesko is considered the top pitching prospect in a draft that is thinner on college arms at the top (they don’t start going off the board in this mock until pick 13). This is actually the second initial mock to send Lesko to the Cubs, with Jim Callis having done so in late December.

Lesko was the first junior to win the Gatorade national player of the year award, and who knows how his senior year will change his standing. By the time he’s finished, it’s possible he’ll have moved up and out of the Cubs’ range (or fallen off). For now, though, you don’t hate thinking about the Cubs taking a big swing on the pitcher with the most upside in the draft. Or at least I don’t hate it. In early January, anyway. Ask me again in June and July.