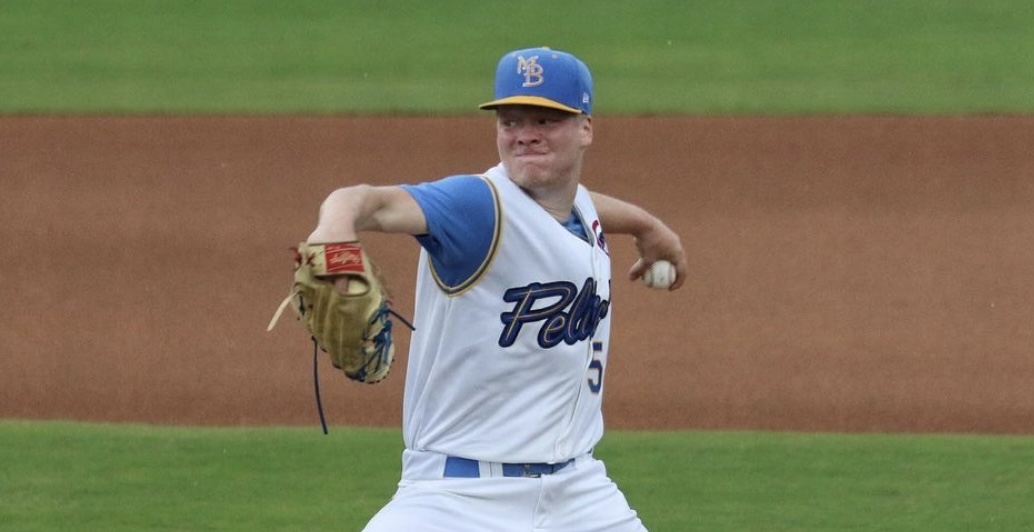 With MLB in limbo, the minor leagues are taking an even more central position in the Chicago Cubs’ world – which was always going to be the case this season anyway, given the turning point the farm system seems to be at – and that means there’s a whole lotta good stuff to check out today. Minor league Spring Training officially starts next week, but there’s a prospect mini camp going on right now, so guys are getting in a lot of work already (heck, many of them were in Arizona getting in work most of the offseason.

⇒ There are two tremendous profile pieces at The Athletic from Sahadev Sharma and Patrick Mooney that are definitely worth a read. I have never wanted the offseason chatter to translate as well as my hype bone feels like it should:

Pete Crow-Armstrong's reaction to getting traded to the Cubs? "Pure shock." But now he's settled, healthy and all-in. Already an elite defender, PCA has changed his swing and is ready to show what he can do on offense. Story w/ ⁦@PJ_Mooney⁩ https://t.co/6bU7BscUvu

The Cubs always throw no-hitters in The Pitch Lab, but DJ Herz’s emergence as a prospect is a bright spot for an organization that has struggled to blend scouting, player development, R&D and tech and produce homegrown pitchers. Story with @sahadevsharma: https://t.co/dk9H0a1xN3

⇒ Among the great quotes from/about these two guys who have gotten disproportionate attention this offseason (which is often a signal that good things are coming):

From PCA: “[Tracking pitches in the cage was] all I was doing for a month. I was so tired of it at the end, but I’m so happy I did it. Getting a feel for the strike zone is huge, especially when you have guys throwing it 95 consistently and a consistent breaking ball. Knowing your zone, knowing the pitches you can do damage with and what you need to hit is hugely important. You shrink your strike zone, you swing at balls you can do damage with, and hopefully the game becomes a little easier for you after that.”

About Herz: In terms of spin efficiency, Herz said the data had his curveball around 55 percent during the season. The Cubs set above 65 percent as a goal and Herz says he’s now consistently seeing 75 percent in those readings, meaning the ball is much harder for the hitter to recognize out of his left hand. As a reference point, Charlie Morton was at 79 percent last year while Joe Musgrove (76.5 percent) and Lance McCullers (70.3 percent) were also rated as having some of the best curveballs in the game.

⇒ A PCA who pairs his contact ability with enough selectiveness to do damage and take walks (with his elite defense) is a stud. A Herz with a plus curveball (to pair with his plus fastball and potentially plus-plus changeup) is a stud.

⇒ Speaking of potential studs, if Caleb Kilian looks at Iowa like he did in the AFL, I don’t know how he isn’t a midseason top 100 prospect (if he’s not already in the big league rotation):

A lot of rain meant little action on the fields today. But we did get a chance to talk with Caleb Kilian.

On his trade, an eye-popping Arizona Fall League outing, and what's next for the right-hander:https://t.co/iyCwWUSGJg via @SunTimes

⇒ As Bryan noted on Twitter, the addition of a quality changeup would give Kilian a five-pitch arsenal, including the new knuckle curve and the mid-90s velo. The young bats get most of the attention in the system, but it’s not inconceivable that the Cubs could have a number of mid-to-upper level starting pitching prospects by midseason, including guys like Kilian, Herz, Ryan Jensen, Brailyn Marquez, and Jordan Wicks.

⇒ Back to PCA for a moment – well kinda: although he was named to MLB Pipeline’s All Defense team heading into the 2022 season, he was NOT named the top defensive prospect in the system! That honor went to shortstop Ed Howard, which is high praise for the glove:

Cubs outfielder Pete Crow-Armstrong made our All-Defense first team, but Howard gets the nod here as another well above-average defender at a more impactful position. A local Chicago high school product drafted 16th overall in 2020 — three picks before the Mets took Crow-Armstrong — he has athletic hands, quick hands and feet, a strong arm and the ability to make throws from a variety of angles, not to mention a high baseball IQ.

⇒ You know the story with Howard, the Cubs’ first round pick in 2020 (just ahead of PCA, as a matter of fact): the glove is described by many as already big-league quality, and there’s little question about his ability to remain an above-average defender at shortstop as he climbs the ladder, which really raises his floor to reach the big leagues. But if he’s going to be more than a glove-first utility guy, the bat has to come a long way from where it showed in a tough initial assignment at Myrtle Beach. There were some signs of improvement late last season, and your hope is that it carries over into this year, where he might initially repeat Low-A and maybe show quickly that he’s ready for South Bend.

⇒ Five young relief arms you might be less familiar with heading into the season:

⇒ He was gonna be a fan favorite anyway, but, yeah, fans are gonna be all over Brennen Davis:

@Cubs fans! My Fav thing of Day3 is a conversation with Brennen Davis! As impressive as he is as a player he’s even more so as a Person!!

⇒ I mentioned it in the Bullets this morning, but just to reiterate how fun the Myrtle Beach lineup could be to open the season: