James Triantos Gets Ranking Love, Takes Some Infield, and Gets LOFTY Comps Skip to content 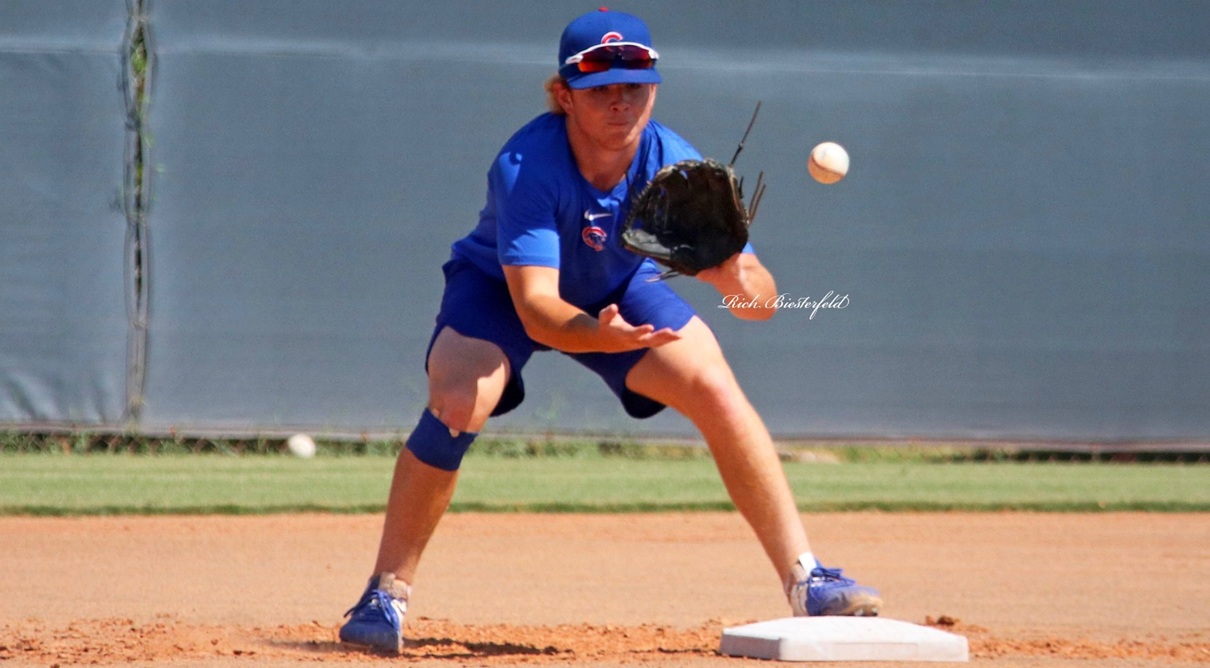 This post is about Chicago Cubs infield prospect James Triantos, the precocious 2021 second rounder who has already reached near top-100 status, and whose performance in the Arizona Complex League last year was about as good as a debut can get. There is no harmonizing principle beyond, “Dang he’s awesome and I can’t wait to follow him this year in full-season ball.” (Also, the new feature image of Triantos was provided by our friend Rich Biesterfeld – thanks, Rich!)

Look who made the top 10 2B in MiLB already over at Baseball America! Pretty impressive!https://t.co/lMRXkHKHlI pic.twitter.com/PKeNzu07j5

To give that some context, Busch is the 76th overall prospect in the game to Baseball America, and Duran/Foscue show up at the back end of some other top 100s. That’s about the range that seems reasonable to me for Triantos just a half-year into his pro career. One thing that’s interesting is where – positionally – you choose to rank Triantos. The expectation has been that he wouldn’t stick at shortstop, but he could very likely handle second base or third base as he climbs the ladder.

Speaking of which, Triantos was out handling some third base duties in Arizona this morning:

A sneak peek at the left side of the infield to open Myrtle Beach’s season this year? Could be. Of course, the Cubs are also going to have to find starts for Reggie Preciado (also something of a SS/3B tweener) and Kevin Made (who can play all over, but is excellent at shortstop). It’s possible Made gets another really tough assignment and is sent to South Bend to open the year, and it’s possible Preciado does extended Spring Training. Now imagine the Cubs REALLY get aggressive with Cristian Hernandez and want him in full-season ball, too! In any case, it’s gonna be a loaded infield group, and Triantos is a huge part of that.

And now for the long read on Triantos, with the over-the-top praise that will get you all kinds of hyped. You will love all of this:

Why scouts are buzzing about Cubs prospect James Triantos, who might be the best prep hitter to come out of Virginia since David Wright, and a big part of the rebuild at Wrigley Field, assuming MLB ends its lockout someday. Story with @sahadevsharma: https://t.co/JxjTff6oMc

A particular selection that has my eyes popping, especially because I know that Sahadev Sharma and Patrick Mooney are NOT ones to overhype prospects:

Triantos gets praise for his special contact ability. Sometimes, for certain players who were able to dominate in high school and overwhelm inferior competition with their bat-to-ball skills, the upper levels of pro ball can create issues. Those innate skills can actually lead to too much contact, meaning that as the pitchers get better, they find holes in their opponents’ swings and take advantage of them. Pitches those players were once able to hammer then lead to weak contact. As Triantos rises through the minors, it’s possible he’ll have to learn to pull back on certain zones he had previously been able to attack against lesser pitching.

But then again, maybe he’s just that special with the bat that as he continues to develop, he’ll continue to be able to cover a large swath of the zone. With a textbook short and direct swing, that may be overthinking it for Triantos. Because right now, this isn’t a player who is sending weak grounders through the infield leading to an inflated batting average that will eventually be exposed by better defense and pitching. Triantos regularly hits the ball with authority, and if a pitcher makes a mistake, he’ll likely end up regretting it.

The comparisons that come up when talking about Triantos are lofty. [Alex] Bregman isn’t just brought up as a comp because they both had a desire to be drafted in the first round out of high school. Suggesting an offensive upside of Bregman or [David] Wright can sound unfair at times, but that’s just how highly Triantos’ bat is thought of.