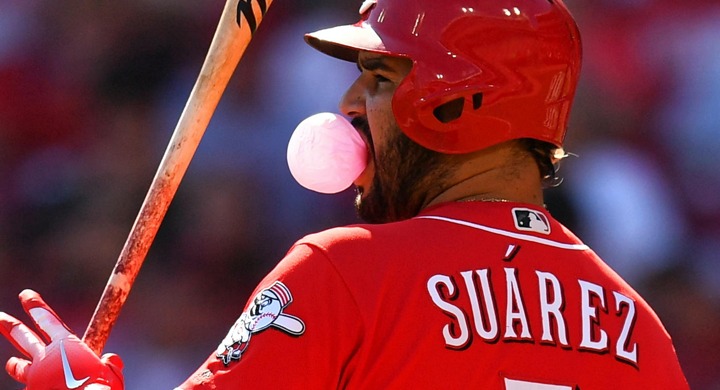 Eugenio Suarez will haunt Cubs fans no longer. Er, well, less often. Both he and Reds outfielder Jesse Winker are reportedly on their way to Seattle.

BREAKING: The Seattle Mariners are finalizing a trade to acquire All-Star outfielder Jesse Winker from the Cincinnati Reds, sources familiar with the deal tell ESPN.

The Mariners are also acquiring Eugenio Suarez in the deal with the Reds, per source.

Setting aside the Reds/NL Central implication for a second, I can’t help but wonder if this is an even stronger indication that Kris Bryant is heading to the Rockies. The Mariners were seen as one of the most likely landing spots for Bryant, who can play in both the infield and outfield, but they just added two position players capable of covering both.

And while Suarez isn’t a consistent offensive threat (except when he’s playing the Cubs, of course), Winker has been for five straight seasons (132 wRC+ for his career, 148 wRC+ last season). That’s a nice offensive boost for Seattle, one that could make the addition of Bryant far less of a priority.

With that said, Suarez was due $11 million in each of the next three seasons plus another $2 million buyout in 2025, for a combined $35 million guaranteed. That’s a lot of money to pay for a guy who posted an 85 wRC+ and 0.6 WAR last season. So if the Mariners are paying down all of that salary (update: see below), the Reds may not get a huge return, regardless of Winker’s inclusion.

For what it’s worth, Winker, 28, is projected to make $6.8 million via arbitration this season, with another year of control after 2022.

As for the Reds, well, their sell-off continues. In case you forgot, they lost Nick Castellanos and Michael Lorenzen to free agency, waived Wade Miley, and traded Tucker Barnhart and Sonny Gray, before shipping Suarez and Winker to Seattle. That’s a lot of turnover for one offseason.

UPDATE: Yep. The Mariners “will take on” the entirety of that $35 million due Suarez. And here’s the return from Seattle.

The #Mariners sent Justin Dunn, Jake Fraley and Brandon Williamson to the #Reds for Winker/Suarez.

Williamson was the Mariners second round pick in 2019 and is currently the Mariners 5th best prospect, though not a top-100 type. Dunn 26, is a former first-round pick (2016), who’s never really broken out as a starter. Though he did make 11 positive-result starts for the Mariners last season (i.e. he’ll cheaply gobble up some innings for the Reds, who can tout his former first-round pedigree as an excuse for the pickup). And Fraley, 26, was a recent top-30 prospect for the Mariners, who had a nice run with the big league club last season (109 wRC+). However, that’s due mostly to his absurd 17.4% walk rate. Otherwise, he hit just .210 and slugged just .369. Shrug.

On the surface, this is a very very light return, but I guess we’ll have to wait to see the full package before holding it over Cincinnati. Either way, this was *clearly* a salary-shedding move. Man, the Reds had a really pointless and fruitless couple of seasons before this blowup.

The SEA-CIN deal also includes a player to be named going back to the Reds, source tells @TheAthletic. Reds high on that player, believe it will enhance package