Albert Pujols is Coming Back to the Cardinals Skip to content 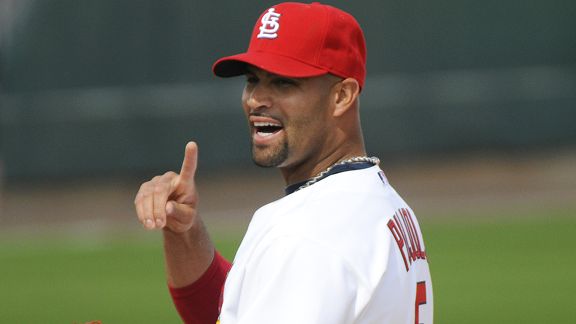 More than a decade after his departure from the organization, and 21 years after his big league debut with them, Albert Pujols is coming back to the St. Louis Cardinals.

Albert Pujols and #stlcards are finalizing a one-year deal to bring the three-time MVP back to St. Louis, pending a physical, a source confirms to @stltoday.

This earlier story will be updated.https://t.co/kG3ej5IdNV

As the 2021 season was coming to an end, I spoke with Albert Pujols about why his kids wanted him to keep playing and why he didn’t want people outside of his family dictating his end date. … https://t.co/auyVNEPn8E

Pujols has not been an above-average hitter overall since 2016, and hitting is all he can do at this point in his career. That would seem an odd fit for any team to sign him to a big league contract, but I do understand the emotional fit here and the pageantry it will afford the Cardinals. I certainly don’t care for the Cardinals, but I don’t hate things like this.

As for the player and the role, Pujols managed to contribute to the Dodgers in the second half last year (league average bat) by facing mostly lefties, whom he did still hit quite a bit in 2021 (.294/.336/.603, 146 wRC+), though the numbers are much less impressive in the years just before that.

Although it’s hard to imagine Pujols being great overall in any kind of significant role, I fully expect he will hit four homers in his first series back at Wrigley Field. That will not come until June, though, so maybe he will have been booted by then.

Hey, if we’re just HOPING for things, how about a season that turns into a farewell tour for Pujols, Yadier Molina, AND Adam Wainwright, all while the Cardinals miss the playoffs?