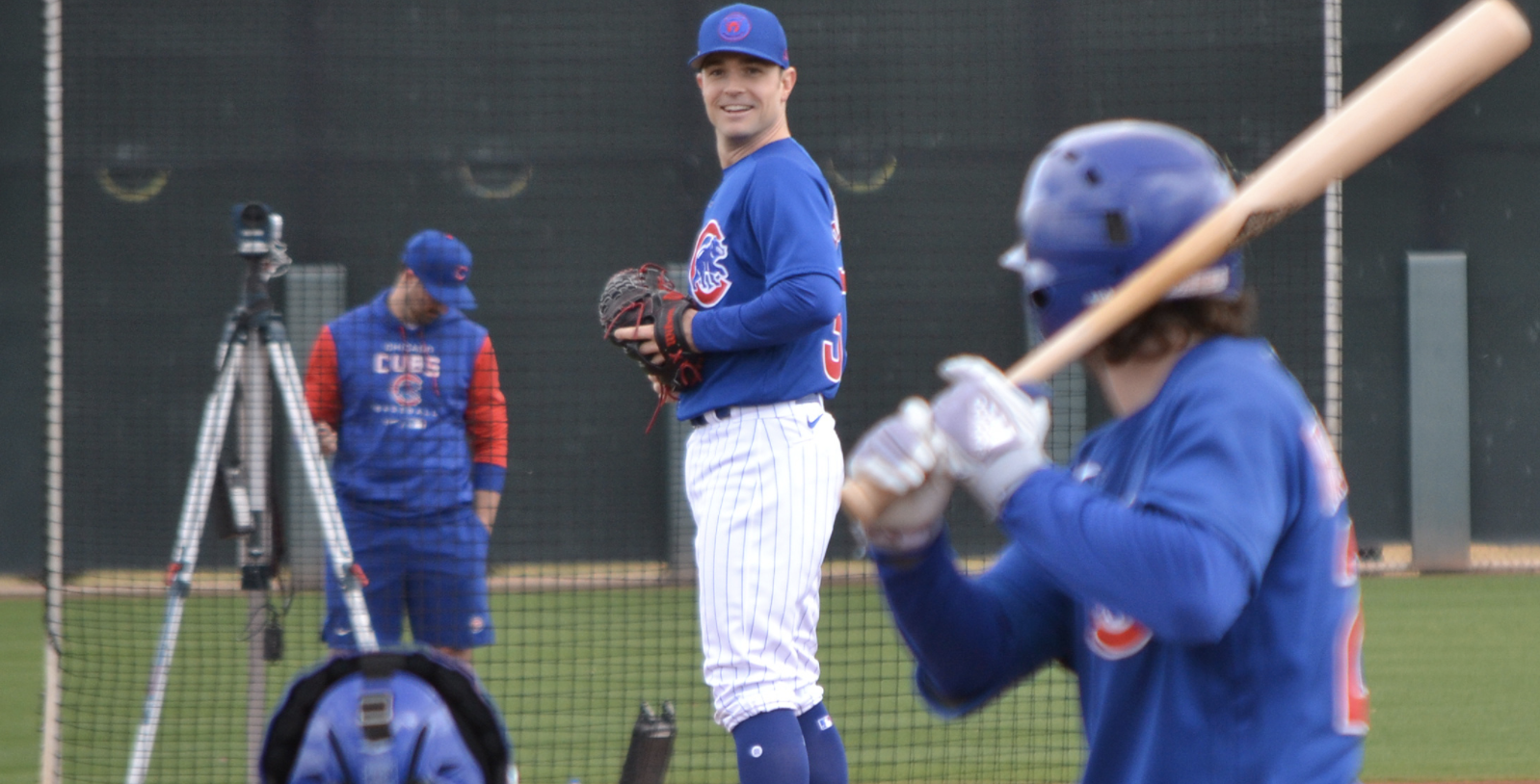 The Chicago Cubs turned in a quick one today, beating the Arizona Diamondbacks 3-2 at Sloan park in 2 hours and 45 minutes. The only problem? Their three runs came on just two hits the entire afternoon. They added another four walks and a hit-by-pitch, but that’s not the kind of offensive performance you want to see, all things considered. Let’s run through it all.

⇒ Willson Contreras took Zach Davies deep to right field in the top of the first, which is always a good sign. He also added a walk and was extremely active behind the plate, though not all of it was pretty. With Justin Steele struggling on the mound (more on that in a second), Contreras tried to bail him out with one of his patented back picks to first, but Frank Schwindel was not quite ready for it *and* the throw was off the mark, allowing the runners to advance as it skipped into right field. Not long after that, Contreras let a high heater bounce off his glove and hit the backstop. He was able to grab it and get the runner trying to score on the error out at the plate, but it all just seemed like he was trying to do a bit too much. A runner also stole second on him, but that was more the fault of Steele(‘s pitch selection) than Contreras, who absolutely laid out to make the throw — somehow, he ended up on his belly. It was pretty funny.

⇒ We talked about Contreras a lot today.

Positional Power Rankings Are Not Too High on the Cubs Catching Tandem – https://t.co/ULucKlvyzQ pic.twitter.com/EIIBPWoD9T

⇒ As for Justin Steele, he had a rough day that ended on a sour note (and then it didn’t). Steele was very wild early on, missing up with his fastball over and over, relying on his breaking stuff (the curveball, especially) to find the strike zone. He walked one batter in the first inning and three more in the second before being removed from the game with two outs. But that wasn’t the end of his outing! The Spring Training rules allow a pitcher to re-enter a game after being lifted, and after Kyle Johnson got the last out of the second, Steele came back out for the third, found the strikezone, and retired the Diamondbacks in order, 1-2-3. It was a very nice bounce back, from looks to results. David Ross/the Cubs handled that perfectly.

⇒ It was a very nice bounce back for Steele, from looks to results. And David Ross/the Cubs handled that perfectly. With Wade Miley still down and virtually no “locks” for the rotation beyond Kyle Hendricks and Marcus Stroman, it was in the Cubs best interest to help Steele end his day on a positive note *while also* continuing to build up his stamina ahead of the season. Whether he’s in the Opening Day rotation or not, he’s going to get a lot of innings early on.

⇒ Sticking with the pitching, Scott Effross – and his sidearm delivery – looked pretty good today, allowing nothing of substance and striking out one. I still have no clue how the bullpen picture will shake out at this point, but Effross does offer a different look/arm slot that could be useful in the middle of the Cubs bullpen. Meanwhile, Mark Leiter Jr. tossed three scoreless innings with 3Ks, but he was hit hard for a large portion of it. Again, just no clue how this bullpen will sort itself out. Both guys have minor league options, for what that’s worth.

⇒ Seiya Suzuki remains hitless with the Cubs, after striking out twice and being hit by a pitch this afternoon. But his zone management and eye looks every bit as good as promised. I was also happy to see him take up right field with Rafael Ortega in center. The Cubs seem intent on handing the early-season center field job to Jason Heyward, who had been the only center field partner for Suzuki until today, but Ortega could still get the nod. Brett got into the Cubs mixed up outfield picture – and Andrelton Simmons role in it – early this morning.

Suzuki doesn't have a hit yet in the Cactus League, but watching his plate appearances, he seems to have a good understanding of the zone and a solid approach.

⇒ I’m not at all worried about Seiya. This was all to be expected and is likely just the beginning of what could be a bumpy transition before he figures out big league pitching.

Stray reminder: every THIRD PARTY evaluator I've seen write about Seiya Suzuki at length has cautioned that the transition to MLB is likely to involve a learning curve against big league stuff/velo. So if he has a tough April or whatever, that is NOT NECESSARILY unexpected.

⇒ Nick Madrigal made a lot of contact today, but most of it was weak contact on pitches he probably shouldn’t have tried to hit in the first place. That used to be called the Albert Almora Jr. problem (and before that, the Starlin Castro problem). Hopefully, he finds a way to make better decisions and not just as much contact as possible; he did have one scorched line drive that just happened to find a glove, though.

⇒ Patrick Wisdom and Frank Schwindel also made some loud outs today, and I don’t have much analysis beyond that. We know what each guy has to work on (Wisdom said he was about “half way through” his swing adjustments, which are presumably about catching up to and/or making better contact with high heat), and they’ll just have to play this season out.

⇒ Ildemaro Vargas, who is out of minor league options but sitting on the bubble of the opening day roster (even without Andrelton Simmons initially and the expanded active roster), hit a home run that put the Cubs on top (he’s also wearing Javy Baez shoes).

⇒ Somehow, Eric Yardley is not Kyle Hendricks. It is astonishing.

Hermosillo also homered, which sparked a nice little interaction between the two. (Of course I didn’t get that one on camera.)

David Robertson was having a blast throwing live BP today. Joking around with his locker neighbor, Michael Hermosillo, throughout.

"This is fun. This is about as fun of an atmosphere that you can have."

Robertson is confident he'll be ready for Opening Day. pic.twitter.com/0qVcX5G6XC

⇒ I don’t know why Travis Kelce was at Cubs camp today, but I don’t hate it.