The outcome of this Cubs season is not going to turn exclusively on the productivity of second base, but second base should be among our positions of greatest interest in 2022. Outside of maybe Seiya Suzuki/right field and Brennen Davis’ eventual debut in center, there’s not a more important duo on the big league roster to observe closely, in terms of potential long-term impact, than Nick Madrigal and Nico Hoerner. If one or both of them are able to (1) stay healthy all season and (2) hit for just a bit more power than they have so far in their career(s), the Cubs will be that much closer to turning the ship around as early as 2023.

So let’s see how they stack up league-wide and take a closer look at their projections, via FanGraphs: 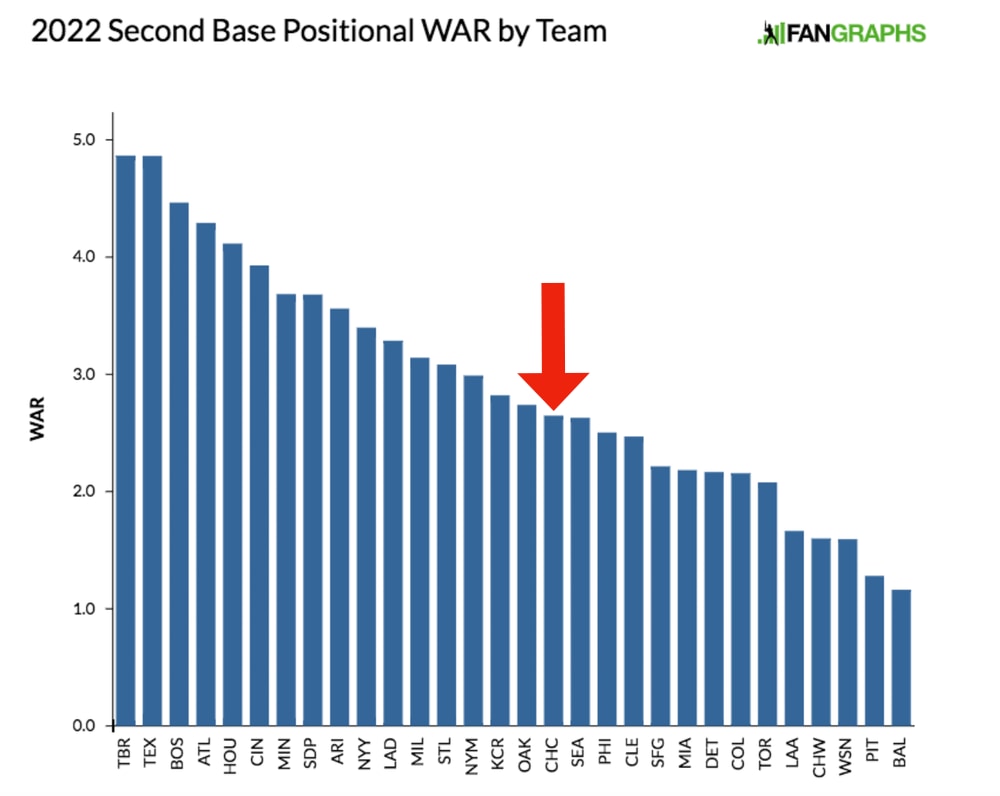 Like their tandem behind the plate, the Cubs’ second base projections (84% of which is attributed to Nick Madrigal and Nico Hoerner) are not particularly rosy relative to the rest of the league. The 2.6 projected WAR (from contributions only while playing that position) ranks 17th in MLB, just in the bottom half of the league.

Now, there are a few “big” second baseman this year – remember Marcus Semien (Rangers) and Trevor Story (Red Sox) are actually going to be full-time second basemen this season, in addition to Ozzie Albies (Braves), Brandon Lowe (Rays), Jose Altuve (Astros), and Jonathan India (Reds) – but it’s just not a stacked position league-wide. So ranking among the bottom half at a position split between two of your “name” players is not good.

But, again, we should be more focused on the individuals and their future, rather than solely their relative production in 2022.

The Depth Charts projections used above (a blend of ZiPS and Steamer) do believe in Madrigal’s continued ability to hit for extreme contact this season. His projected 7.2 K% would have led MLB last season. But that was never really in question.

Instead, we wonder if he’ll hit the ball with enough authority to sustain a high batting average and enough pop to be anything more than that. Here’s where Depth Charts lands: .296/.344/.403 (101 wRC+).

Forget Madrigal realism; I believe in the power of Madrigal thinking. Though he missed most of last season due to injury, he’s already showed that his contact-first, contact-second, defense-third, contact-fourth approach plays at the major league level. It’s not going to be all about barrels – in fact, it will almost exclusively be about non-barrels, given that he has exactly two in his short career, and one of the lowest hard-hit rates in the game. But strike out this rarely – 7.4% in his career so far – and walk just a little bit, and you’ll achieve an enviable OBP. Look at that .297 projected batting average! Sprinkle in a few doubles and some improved baserunning, and he could be a big part of the team’s future.

The average and OBP are certainly nice enough, but you would hope for more than a .107 ISO, which would’ve just barely escaped the bottom-10 last season. With that said, there’s probably something to be said about the less-easily measurable value of putting the ball in play THAT often. And for what it’s worth, Depth Charts is projecting a .310 BABIP next season, which is much lower than where Madrigal has been so far in his career (.338 BABIP). (Though that’s an issue Brett has discussed.)

If he can keep finding holes and tick that isolated power up to something closer to his short stint last season (.120 ISO over 54 games), the overall picture will be much brighter than a roughly league-average bat with some kind of contact bonus. You’d also probably more happily park him at DH when available, to get Nico Hoerner’s glove in there at second.

Hoerner’s offensive projections are not quite as rosy as Madrigal’s: .277/.342/.383 (95 wRC+). But it’s important to remember that Hoerner’s defensive value is far superior, not only vis à vis second base (where Hoerner has already been a finalist for a Gold Glove), but also for his ability to cover the entire infield, as needed.

Either way, Hoerner’s greatest value – this season – will likely come with the glove:

When Madrigal gets a rest, or if he misses time with injury, Hoerner is an excellent second option. He’s going to have a super-utility role this year as the Cubs figure out where he fits long-term, with infield, outfield, and Zobristian multi-positional beast all in play. Also in play? A bat that never quite reaches major league average, which would make the rest of the package rather less enticing. But this season is a fact-finding exercise for the team, and Hoerner is a nice fit for that.

In a lot of ways, Hoerner has a very similar offensive profile to Madrigal. They both make a lot of contact, they both figure to hit for enough average to sustain a good enough OBP, and they both have significant questions about having enough playable power.

I’d say Hoerner is likely to hit for more power, and Madrigal for a higher average, but these are similar profiles all things considered. The value of the power is not entirely about the extra-base hits, themselves, but is also about keeping defenses and pitchers honest enough so that the BABIP and walk rates can stay decent.

The Cubs will rely on these two for contact, no doubt about it, but just a little more power can unlock an entire new level for both of them. And if just one of these two emerges as a no-doubt second base option for 2023, the Cubs will have a key position locked down affordably for the foreseeable future.

(Brett: Dream scenario? That guy is Madrigal, while Hoerner establishes himself as an above-average bat in a super utility role, playing good defense all over.)