Oh, Yeah: Kyle Hendricks Had It All Workin' on Opening Day Skip to content

Although I’ve been firmly planted in the Kyle Hendricks will have a good season camp, I wasn’t quite expecting that level of performance out of The Professor on Opening Day: 5.1 IP, 5H, 1ER, 3BB, 7Ks.

Despite facing a lineup that crushed him last season (.392 wOBA, 6.14 ERA in 2021), loaded with lefties (.377 wOBA, 4.65 ERA in 2021), after a hectic offseason and short spring training ramp up, Hendricks got his results, looked sharp, and set the Cubs up for a rather surprising win over Corbin Burnes and the Milwaukee Brewers. Heck, even in some of his best seasons, Hendricks tends to start off slowly. So this was especially awesome to see.

But it’s not just the results that have me all giddy this morning. It’s the underlying performance. Hendricks netted a staggering 17 whiffs on just 83 pitches over his 5+ innings of work on Thursday — that’s good for the third most whiffs recorded in a single game for his entire career and the most he’s had in a game since August of 2017! (h/t @CespedesFamilyBBQ)

Here’s a look at all that wind he created.

You no longer need to miss baseball.

Unless you're facing Kyle Hendricks. pic.twitter.com/HpUEATNKMc

So now the question becomes … how did he do it? What was working? What changed? Was it planned? Etc. Well, let’s start with the pitch-mix, because that will lead us into the more specific note from Hendricks, himself.

In short, Hendricks dramatically reduced the deployment of his sinker yesterday, in favor of the changeup (which Milwaukee was just NOT picking up – 13 whiffs on that pitch, alone) and his curveball, which looked pretty nasty from right field. But on any one day (especially a cold, rainy, first-game of the season), a pitcher might tweak his pitch mix to find what’s working. So the raw usage data, alone, isn’t really the story here. It’s notable, but it’s not completely unexpected. Instead, the bigger draw is how closely his approach aligns with what he SAID he was going to do differently this season because of what he learned in 2021.

Here’s Kyle Hendricks talking about what went wrong last season and how he planned to change that in 2022 via Sahadev Sharma at The Athletic a week ago:

“I think I got away from (going down and away) at the start just based strictly on results and the swings I was getting and bad contact I was getting,” Hendricks said. “The game started to change and guys got way more aggressive overall. For me, instead of establishing my fastball down and away and then going with my changeup and curveball and pitching inside off of that, I just ran straight to where I’m trying to get an out. I’d run straight to an up-and-in fastball, straight to a breaking ball in the dirt. I just never established — especially through the second half of the season — a fastball down and away in the zone.”

“For me, the pitcher I am, everything works off the fastball down and away,” Hendricks said. “Even if guys are aggressive, it doesn’t matter, I need to establish the bottom of the zone first.

Well, guess what? Yesterday, he felt that he was able to establish his fastball(s) down and away to both hitters (though he concedes he started missing up a little more as the day went on), which allowed him to follow up with devastating change-ups in the same spots. Per Jordan Bastian: “You saw the swings on the changeup. That’s how it’s going to work. If I can’t establish the fastball, the changeup won’t play off it.”

A lot of right-handed pitchers like to bring the changeup inside against left-handed hitters, but yesterday, Hendricks was tunneling that pitch low-and-away following the path(s) of his fastball(s): 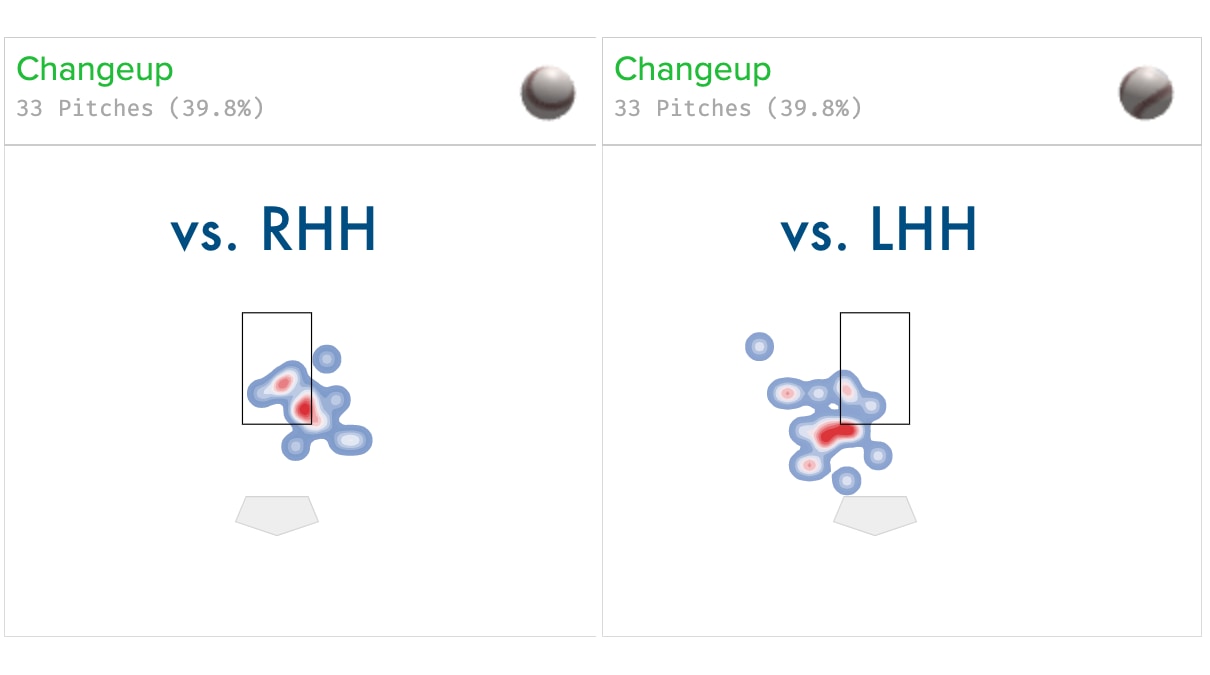 But let’s not sleep on that curveball either!

Even from right field, you could see how baffling the pitch was for a few Brewers hitters, and Hendricks was clearly feeling it (via The Athletic): “I think it’s coming in at more spin with the numbers, has more bite,” Hendricks said. “It feels good coming out of my hand, so I’m just trying to throw it in more situations. Early in the count, behind in the count, late, just trying to be unpredictable with it.”

You know we gotta check out the spin rate now, and guess what … it was up, big-time, yesterday against Milwaukee, relative to Hendricks’ career:

According to Statcast, Hendricks’ curveball had more vertical drop yesterday (1.7 inches) than he has posted on average since 2018. He seems to be sacrificing a little bit of horizontal movement to achieve that drop, but if he’s already working better left to right with his fastball and changeup, then changing eye levels even further with the curveball could be a deadly weapon – especially if he uses it so unpredictably.

So let’s recap: Hendricks identified his weakness last season, and attacked it in his first start of the year (establishing his fastball low and away). After getting that foundation set, he leaned on his best pitch, the changeup, to clean up at-bats, and sprinkled a better-than-ever curveball unpredictably to keep hitters off balance and change eye-levels. And he did all of that against a team that crushed him last season, loaded with lefties, against whom he tends to struggle. Uh, yeah, that’s a good first start for The Professor. Let’s see if he can keep it going.