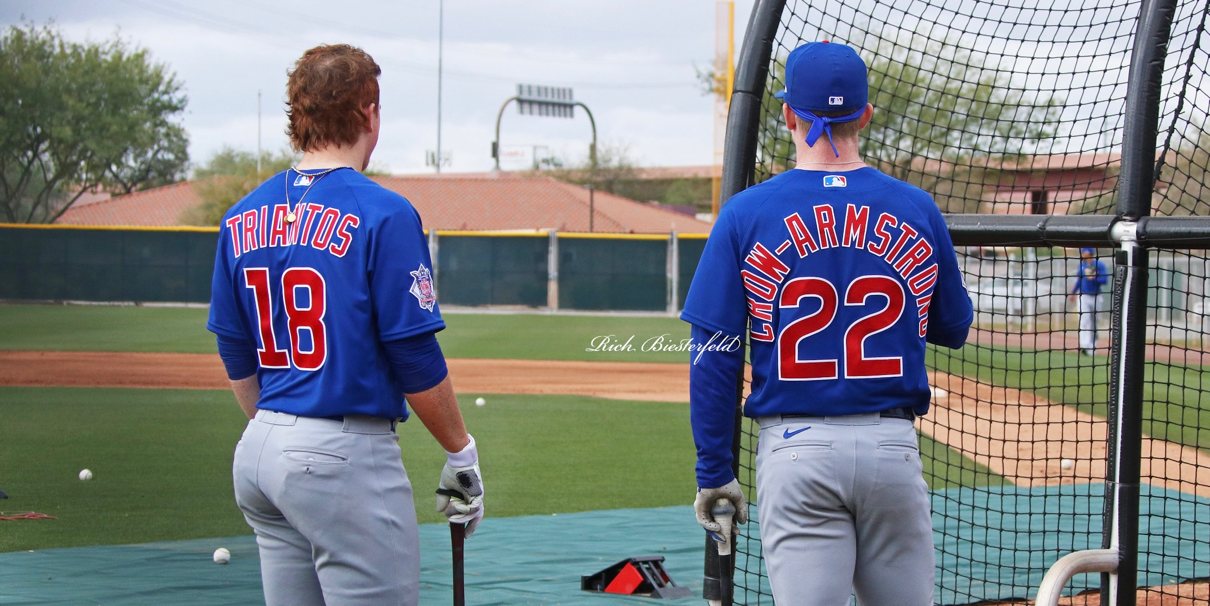 Three of the top 11 prospects in the organization will find themselves in the 2022 Myrtle Beach lineup, as the Pelicans revealed in their Thursday release of the 30-player preliminary roster. James Triantos and Reggie Preciado will make their full-season debuts under long-time manager Buddy Bailey. Kevin Alcantara, who is a week or three behind after an injury delay during camp, will ultimately join Pete Crow-Armstrong as 2021 acquisitions playing in the Pelicans outfield.

The Myrtle Beach Pelicans, in conjunction with the Chicago Cubs, have announced the 2022 roster: https://t.co/w2Vukd40rB pic.twitter.com/QHB7QIWn6G

While we wondered if Kevin Made, Ed Howard or even Cristian Hernandez might be on the Pelicans roster, it appears the shortstop position will primarily be handled by Yeison Santana out of the gate. Santana started the 2021 season on the Myrtle Beach roster, but was moved down to Arizona after struggling to get going. This will be a big opportunity to prove he continues to belong in the organization’s middle infield discussion.

The pitching staff might not have a top 25 prospect in there, but it’s really fun group of starting pitching prospects on that next tier. I think every single name was mentioned as a possible sleeper to me at some point this offseason.

As is always true with the Low-A level, it’s also likely the Cubs have kept some players in Arizona for Extended Spring Training that will ultimately end up here. And then when the 2022 Draft happens, the Pelicans will see a slew of Division 1 players.

I really hope the lineup is organized with that top three (and eventually four with Alcantara at cleanup), don’t you? Wetzel is back in Myrtle Beach after a solid-but-inconsistent 2021 season. He’s probably the safest bet to be the team’s best hitter.

While I mentioned Santana as a bounce back candidate, it’s also a big season for Ethan Hearn, who really struggled making contact in 2021. I was really impressed with his work behind the plate, and you can see the raw power, but he needs the strikeout rate to be under 30%. Hearn will share the catcher position with Fabrizio and Quintero.

Also keep your eye on Felix Stevens, who is now 22 years old with a pretty maxed out 6-foot-4 frame. He might have the most power in the system, and the spacious TicketReturn.com Field in Myrtle Beach shouldn’t be an issue for his best-hit balls.

Gallardo has been a hot name lately following a winter of really good weight room work, and it’s reportedly led to a fastball up to 96 mph. Given that he’s repeating the level, let’s hope for a significant jump in strikeout rate. Luke Little will have no trouble in that department, the question will be if his command and stamina can hold up for entire starts. I expect he will have someone piggybacking all of his starts, as he’ll probably be on an innings limit after a lack.

Tyler Schlaffer and Luis Devers possess two of the best changeups in the system, and the question will be if the breaking balls can take a more consistent step forward this season. I even mentioned Schlaffer as my “dark horse” candidate for minor league Pitcher of the Year, as long as he can avoid the home run ball. The Porter Hodge development has been slow-moving so far, but after showing one of the better sweeper sliders in the system last year, I wouldn’t be surprised if he took off in 2022.

The three 2021 draftees stick out here: the hard-throwing Scalzo likely emerges as closer, while big-spinners Watkins and Martin should be successful in multi-inning work. If you’re picking someone from the pen to prove ready for South Bend by June, I’d look here.

Jake Reindl is someone I’ll watch closely after earmarking him as a sleeper out of Spring Training, and Reed is someone that made an impression in limited work last season.

I see four piggyback candidates that will surely end up getting plenty of starts of their own: Rodriguez, Gonzalez, Santana, Powell. I watched Santana pitch pretty well in a Triple-A game during Spring Training, so the Cubs will trust him at other affiliates if an arm is needed. Powell, one of the more accomplished college pitchers in the organization, fits in that category as well. Rodriguez and Gonzalez both showed some potential as starters last year, but I’m actually pretty intrigued to see if their stuff jumps in short work.

Everyone on this bench is going to be prioritized to get plenty of starts. Murray is a fun name, a player of Bahamian descent that had a 1.007 OPS at Florida Atlantic University in 2021. Spence is someone I expect will jump around different teams when needed this year, as he’s advanced enough to handle aggressive assignments. Pagan and Quintero both showed some unexpected pop in the Arizona Complex League that’s worth further exploring.