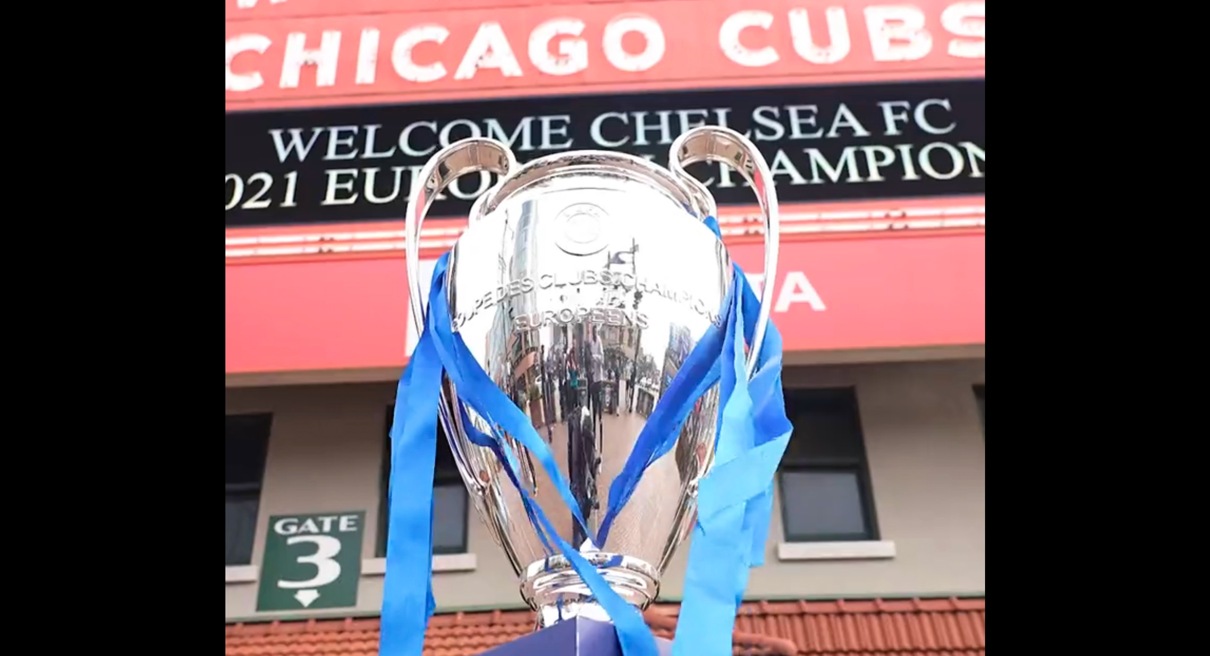 The Ricketts Family, owner of the Chicago Cubs, have long sought a stake in a professional football club – the kicky kind, not the American football kind – and they are now reportedly suitors for a major club that could be hastily sold in the wake of the many recent sanctions against Russia. (SEE UPDATES BELOW, including that they are now out.)

Chelsea FC is going to be sold as soon as this month, per Sky News, as the current owner is a Russian billionaire who believes it is in the “best interests” of the club to sell right now. The owner, Roman Abramovich, says he will donate the net proceeds from the sale to benefit victims of the war in Ukraine (Sky).

That’s where the Ricketts Family could come in:

There are a number of other interested suitors, but it’s notable that The Raine Group is overseeing the sale, and the Ricketts Family has already worked with that particular financier on various deals involving Marquee. There is probably a lot of familiarity there already, and, like I said, the Ricketts have been trying to buy a football club for a while.

As for the money, well, Sky reports that the minimum bid is going to be 3 billion pounds, which is about $4 billion. Presumably, most of that would be financed – just as the Ricketts financed the purchase of the Cubs – and you immediately wonder what the implications would be for the operation of the Cubs. Would the team be part of the collateral for the financing in the Chelsea purchase? Would there be a new “company” created to own both organizations (a la the Red Sox’s ever-evolving setup – the Fenway Sports Group includes the Red Sox, the Pittsburgh Penguins, and Liverpool FC)? Would the finances of one team impact the other, for good or bad? So on and so forth.

As for the team, itself, Chelsea competes in the top league in England (the Premier League), and they have been wildly successful over the past 25 years (as I understand it). They even visited Wrigley Field in the fall:

Our first stop in the Windy City had to be at one of the most iconic stadiums in sports: Wrigley Field 🏟 #BluesInTheUSA pic.twitter.com/7bkNFyqCLq

I don’t want to go too far down the road on this until and unless it gets more serious that the Ricketts Family *will be* the winning bidder. Again, there are a lot of other interested parties. The other issue, obviously, is how a Russian billionaire selling a major sports team would be handled in the current environment. On the one hand, the international community might not want him owning a team like that at all … but also wouldn’t want him benefitting from its sale. Again, he has said he will be donating the proceeds to the victims of the Ukraine war, which I suppose is how he would try to get past the thorniness. But we’ll see how this plays out.

One thing is for sure, though: with an ongoing CBA fight, the mere interest by the Ricketts in buying another very expensive sports team will be spotlighted as additional evidence that owning an MLB team probably isn’t bad business.

UPDATE: This is indeed massive news, with implications for Premier League fans that run much, much deeper than anything that implicates our specific interests here at BN:

Also: no merchandise sales allowed; no player transfers or new contracts; catering services will be permitted.

Imagine your favorite team just gets completely frozen. Cannot do anything, at all, except play the games. Oof. Certainly feel bad for the fans.

Setting that aside, there is the proposed sale, which was to see bids coming in as soon as next week. The Ricketts Family, as this post noted before, was to be among the prime bidders (either by themselves or as part of a group). From there, the potential implications for the Chicago Cubs are non-zero, so that’s why we’re following this. But now it’s all kind of up in the air.

Apparently the team can still be sold, but it’ll be much more heavily managed by the UK government to ensure that nothing goes to Abramovich.

UPDATE 2: This is getting more serious, as the Ricketts have teamed up with a significant source of additional capital:

Exclusive: The Ricketts family's decision to join forces with Ken Griffin, founder and CEO of Citadel Asset Management – and their decision to publicly confirm that they will table a bid for Chelsea FC this week – makes them a very serious contender. https://t.co/ZuwdujdVjR

UPDATE 3, April 15: It’s over for the Ricketts, apparently:

From the Tribune: “The Ricketts-Griffin-Gilbert Group has decided, after careful consideration, not to submit a final bid for Chelsea FC,” the group said in a statement. “In the process of finalizing their proposal, it became increasingly clear that certain issues could not be addressed given the unusual dynamics around the sales process. We have great admiration for Chelsea and its fans, and we wish the new owners well.”

Was it a financial issue? Concerns about future spending? Or was it the conflict about Joe Ricketts’ racist and Islamophobic emails that leaked a few years ago? The statement reads to me like it’s implying more about the financial side of things (it’s a weird sales process because of the forced sale), but who knows.

As for the Cubs, they now remain the Ricketts Family’s sole pro team and focus, which, as we’ve discussed, could cut in a number of directions.