Drew Smyly's Great Start to the Season Is Actually Part of a Longer, Impressive Stretch Skip to content

If it weren’t for injuries to Adbert Alzolay, Wade Miley, and a few other stray relievers this spring – plus a lockout that preceded it – Drew Smyly might not even be on the Cubs right now, let alone pitching out of the rotation. But so far, he’s taken advantage of this opportunity with back-to-back scoreless starts against the Pirates and Rockies to start the year: 9.2 IP, 7H, 0ER, 1BB, 5Ks.

Looking beyond the high-level results, you’ll find a combined 56.7% groundball rate (8th best in MLB), an 18.2% infield fly ball rate (15th best), and league-leading marks in average exit velocity (77.9 MPH) and hard hit% (16.7%). In other words, Smyly has basically been the most effective contact-manager in MLB this season, and he’s managed to do it all while walking just one batter.

The biggest knock on Smyly right now is that he hasn’t provided much length in either outing (5.0 IP and 4.2 IP), but there’s some pretty easy pushback available there, as well. For one, a five inning start in 2022 is like a six inning start 5-10 years ago — at least, in terms of individual goals and team expectations. And for another, we’re still just two starts into the regular season following a shortened spring training period. Smyly will likely stretch out beyond the 71 pitches/game he’s averaging at the moment. And I have no trouble projecting some longer outings in the near future, especially if he’s able to stay as efficient as he has been.

But I think the more encouraging angle here is not how good he’s looked against two of the NL’s weaker teams to start the year. (One start was at Coors Field, though, so let’s not take away too much credit.)

Instead, it’s how far back we can look at the data and uncover an equally impressive stretch.

If you go all the way back to the start of last season, Smyly has a 4.16 ERA over 25 starts and six relief appearances (3% better than the league average for any pitcher with at least 100 IP during that stretch). But we can be much more generous than that if we do some more artificial-cut-off-ing.

As Smyly has put more time between himself and Tommy John surgery, his numbers have improved. For example, from June 1, 2021 through his last start in Colorado over the weekend, Smyly has posted a 3.35 ERA (22% better than the league average, and 26th best in MLB during that stretch among qualifiers).

Shrink the window down even further, and you can accurately claim the following to your friends at the bar: Over his last 15 starts (and 6 relief appearances) dating back to the middle of last season, Drew Smyly’s 3.15 ERA is the 21st lowest mark in MLB for all pitchers that threw at least 80 IP. Not bad, eh?

Smyly does seem to still be tinkering with the most effective fastball velocity post-TJS (or he just can’t maintain his prior levels? or he’s still ramping up? or he’s figured out how to be more effective at a lower level of velocity? or it’s mechanics-related and the velocity is a mere byproduct?), and we’ll just have to play the waiting game on that one: 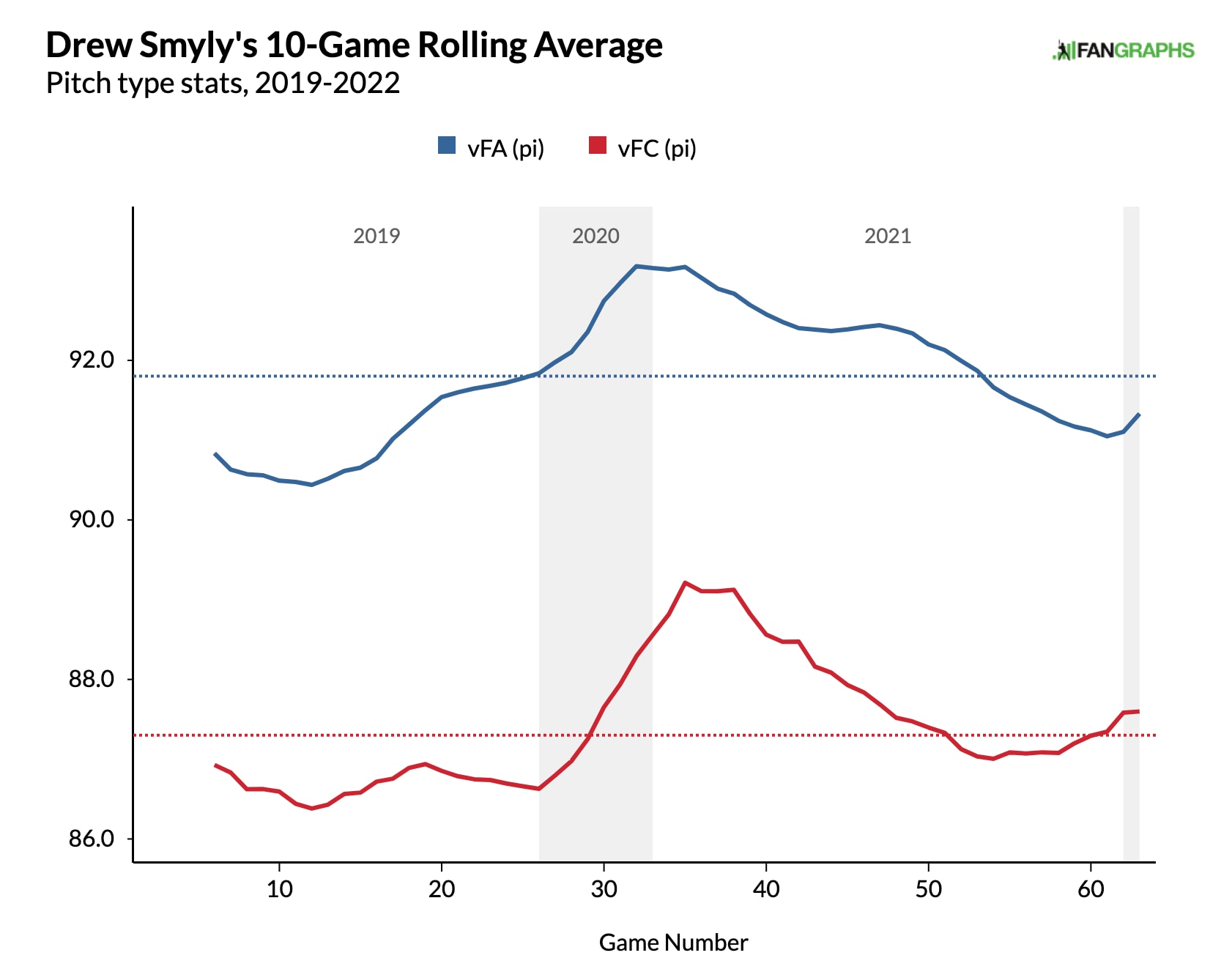 We’ll see where things stabilize as the weather turns and Smyly gets more pitches under his belt. He’s not going to be a “hard” thrower, but it’s interesting to see how much his success correlates with the drop in velocity. It’s not as if he’d be the first guy to find that he can command his pitches better at a lower velocity, and the trade-off for some is worth it.

Either way, the Cubs second chance with Smyly has paid off here in the early going. Even if he’s not a long-term member of this rotation, he can still provide quality innings at a time when the Cubs are desperate for them. And then we’ll see what’s what with Smyly and the Cubs come July.