Pitchers Are Not Attacking Nick Madrigal Any Differently - So What's Up? Skip to content

If you’re wondering what’s going on with Nick Madrigal this season, you’ll have to get in line. The Cubs’ second baseman is slashing just .213/.263/.253 (52 wRC+), and even his famously low strikeout rate has crept up from elite to outside of the top-50 in MLB.

“I’m not too worried about it,” Madrigal said to Sahadev Sharma at The Athletic. “It is frustrating missing pitches I usually don’t miss. But I’m not doubting myself or worried about what the numbers say right now. I still have all the confidence in the world right now. It’s just a matter of time. If I stick to my confident mindset, things will start turning around.”

As Sharma explores, Madrigal is still making contact as much as ever (89.6%, 4th highest in MLB), but his (1) K rate continues to climb, he’s (2) struggling against fastballs, and as I’m sure we’ve all noticed, he’s (3) beating everything into the ground. Indeed, among all players with at least 80 PAs, Madrigal’s 0.00 average launch angle is the single lowest in MLB.

To be fair, Madrigal’s average launch angle was actually negative when Sharma wrote this article a few days ago, so it’s technically trending in the right direction (and if we play the arbitrary cutoff game, we can put him at 6.3 degrees over his last 29 balls in play dating back to 4/20), but that’s only half the story. Because just as he started to elevate the ball a little more, his hard contact rate has gone down: 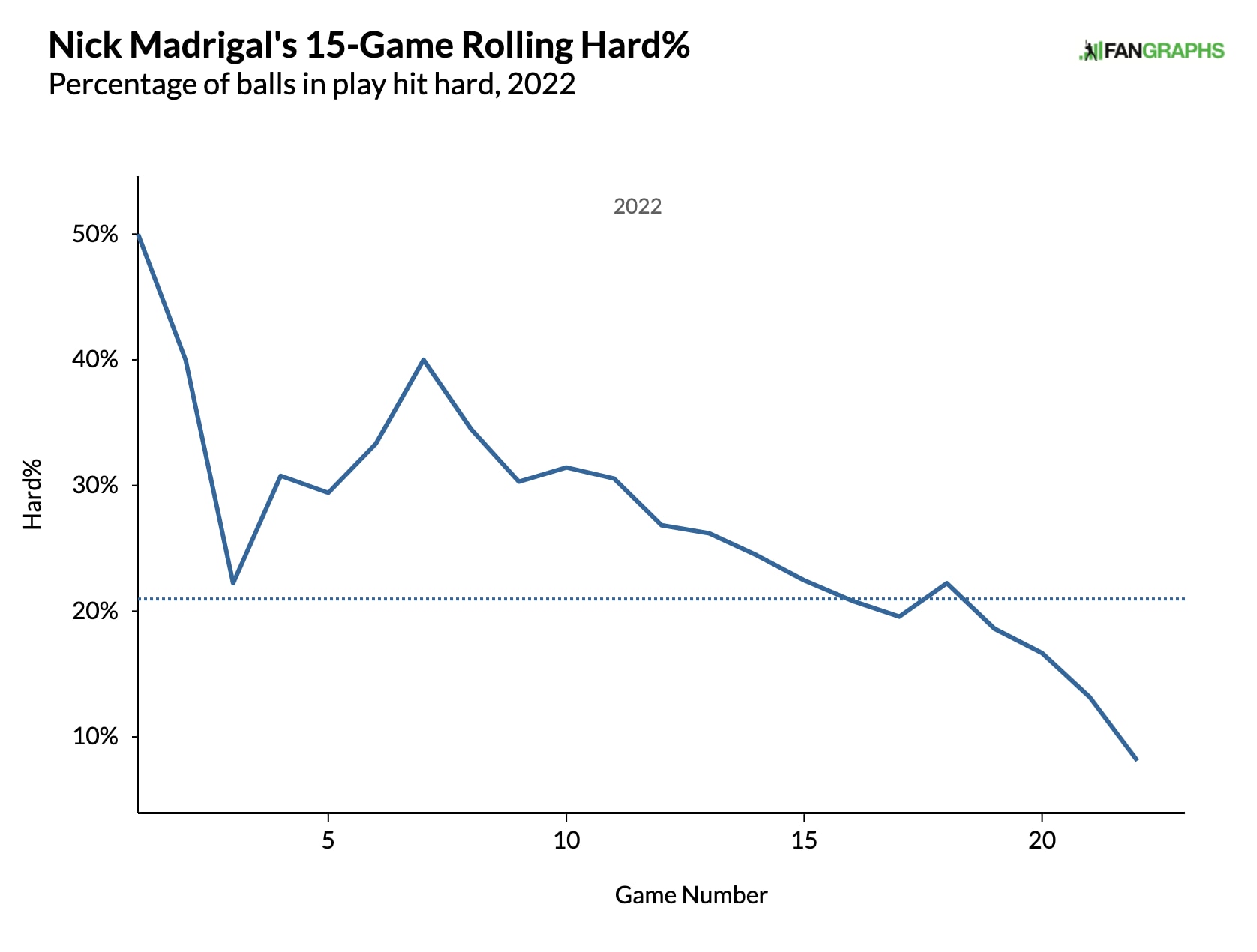 We could spin this as a batter trying to find a balance between elevation and power, while getting himself on time — that seems to be the route taken by Cubs hitting coach Greg Brown in that Athletic piece …

“Time and space allows guys to either elevate balls or not,” Brown said. “As his attack angle improves, I think it’ll directly correlate to when he’s on better time and direction. That’s something that because of the timing, sometimes direction falters. Therefore, it’s much easier to be out and around the ball. But he really understands himself. It’s just getting him the reps. And we can’t negate that he missed like 200-plus days of full-go activity.”

… But it won’t likely make you feel much better until we start seeing at least some results.

There’s another issue I noticed after reading the next statement from the Cubs hitting coach: “Obviously there’s been an emphasis on squaring balls up and hitting balls harder,” Brown said. “But it comes down to the fundamentals. You gotta be on time and make better swing decisions.”

Swing decisions. That stuck with me.

Usually, when that’s happening, I like to look at how pitchers are attacking him to see if they’ve made some meaningful change in their approach, but … no dice. Not really.

Is he seeing a slightly different assortment of fastballs? Yeah, sure. But these aren’t huge differences, especially so early in the season. And in terms of velocity, his average four-seamer is the same speed he’s ever seen throughout his career (though he is seeing harder cutters and sinkers). Still, this just doesn’t seem to be any sort of meaningful answer. (Nor is the relative volume of pitches he’s facing in and out of the strike zone – it’s basically the same as his first two big league seasons.)

Which brings us back to Sharma’s point at The Athletic: Madrigal is struggling against fastballs more than he ever has in his career (per Sharma: he’s hitting just .235 against fastballs this season after a .364 mark last year), but without a very meaningful distinction in the type or velocity of those fastballs, this boils down to Madrigal’s own timing. He’s off.

The question now is does that make you feel better or worse?

For me, it makes me a teeny-tiny bit more optimistic, I think? If pitchers were suddenly attacking Madrigal differently and totally neutering his results, I’d be concerned about a newly-discovered weakness. But we’ve seen Madrigal succeed against this plan of attack before, so he should be able to do it again. And it’s not like that’s entirely without reason (he missed more than half the 2021 season, it’s not crazy if he wasn’t back to his usual self just yet). And given how lost this season already appears to be for the big league team, the Cubs have nothing but time to figure that out.

(Brett: If you wanted the pessimistic take, it would look something like this: even as he faces the same approach from pitchers, Madrigal is having trouble making quality contact ever since he came back from a major leg injury. I’m not saying I buy that more than the optimistic take, but that would be the flip side.)

Read more from Madrigal and the Cubs hitting coach from Sahadev Sharma at The Athletic.