I Actually Have a Lot to Say About Cubs Catcher P.J. Higgins Skip to content 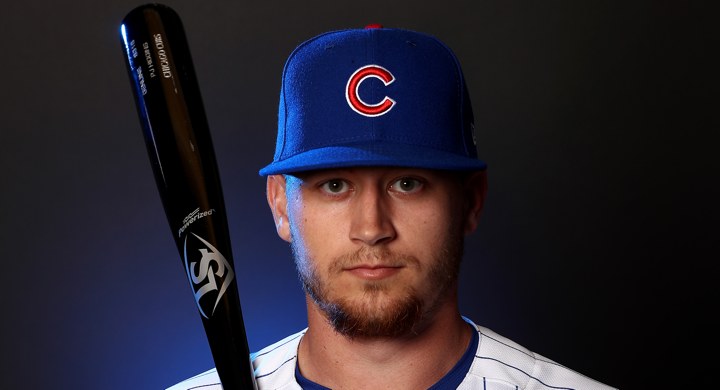 It was nice to see Chicago Cubs catcher P.J. Higgins immediately make an impact yesterday with an extra-base hit after his previous, very brief appearance in MLB last year went so badly. Not only did Higgins do pretty much nothing at the plate in 25 plate appearances, he also hurt his arm and eventually had to have surgery that ended his season. So for him to come up in a tight spot this weekend and immediately drive in three with a triple? It was really nice to see.

But what does the future hold for Higgins and the Cubs? Is he merely a temporary fill in who is going to be punted before too long, or is he a real medium-term option?

Well, I actually have a lot of Higgins-related thoughts! I didn’t expect it, but they just kinda kept coming as I typed. So away we go …

First, a little background: Higgins, who just turned 29, has been in the system since 2015, and was a catching convert who has pretty much always hit, especially once he got to Triple-A:

The time spent developing his glove behind the plate, the existence of catchers ahead of him, and a variety of weird one-off factors have all conspired to make this older “prospect” a guy who wasn’t on too many radars for this year, much less the years ahead. And, to be sure, it’s still probably a very long shot that Higgins is a meaningful player for the Cubs in 2023.

That said, given the offensive potential, given the looming possible departure of Willson Contreras, given Yan Gomes’ age, given Miguel Amaya being out with Tommy John, etc., etc., I tend to think the Cubs would like to not lose Higgins from the organization any time soon.

So, what does that balance mean? Well, for one thing, retaining Higgins would entail him staying on the 40-man roster at least through this season (even if optioned back to Iowa), and then also staying on the 40-man into the offseason, when there is going to be a significant crunch of prospects who need to be protected from the Rule 5 Draft (and, hopefully, a number of external additions to bolster the 2023 squad). It’s not going to be easy decision-making, particularly against the backdrop of having so little knowledge/data on what Higgins is as a big league catcher.

That concept got me thinking, in turn, about how you’d want to see Higgins get a lot of big league playing time this year in advance of having to make those 40-man decisions. Like I said, he’s already 29. And, while there was a pandemic in there that added an extra “year” to his age, and catchers do frequently develop later with the bat, you kinda gotta know as soon as possible if he can contribute in the big leagues, because the available window in which he could realistically do that is pretty short now.

Is there a chance, then, that Higgins stays up as a third catcher for a while, even if Contreras doesn’t go on the Injured List with his hamstring issue? Remember, pitching staffs have to go down to a maximum of 13 starting next week, so the Cubs are already going to have to swap out a pitcher for a position player (Clint Frazier returning, perhaps?). That would make it a little easier to keep a third catcher on the roster, especially one like Higgins, who can also play the corner infield spots in a pinch.

Of course, none of that matters if Higgins doesn’t hit his way into staying with the big league team, something he hasn’t been able to do in the past. But given how he’s hit at Triple-A the last few years, and given that he is now over the flexor mass surgery, I really think he’s worth finding out more about this year.  The Cubs could have a wiiiiide opening at catcher last year, even if Gomes sticks around (at 35/36) as one of the starting-ish catchers next year. I don’t think we can or should bet on Higgins being a clear big league back-up next year, but I do think the circumstances – when considered all together – push pretty strongly in finding out this year what he is. Just in case.

Maybe Higgins doesn’t stay up with the big league team for long this time around. But I do hope that he stays on the 40-man roster, and gets a chance to come back up to the big leagues for a meaningful stretch this season, one way or another.