Conversations About the Badness, Suzuki's Finger and Whiffs, Steele's Command, and Other Cubs Bullets Skip to content 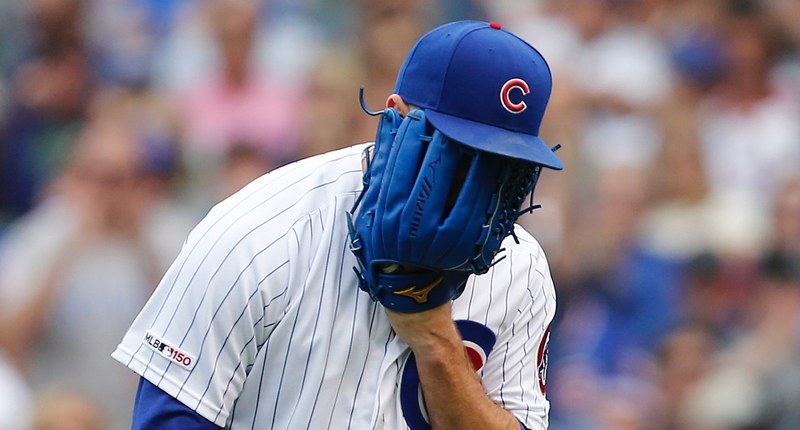 A scheduled Friday off-day is just throwing me for such a loop. Fridays during baseball season mean a wonderful 1:20 start at beautiful and historic Wrigley Field … or some stupid 8pm start up at Miller Park Family Field for some ridiculous reason. In either case, it’s Cubs baseball on a Friday. But none today, and that’s just so weird.

•   For as bad as the Cubs have been – and there are no two ways about it, this has been a bad team overall – there are an incredible SEVEN teams with a worse record than the Cubs. The Cubs are “better” in the standings right now than they were at the end of last season. That seems to say more about the state of parity in baseball than it does about the Cubs.

•   As for yesterday’s loss, specifically, it’s one of those things that is – for me – notable and not. It was a historically bad loss, and that does merit mention and is worth going up on the fridge of “accomplishments” this year. But at the same time, one game like that (or one game like the 21-0 win over the Pirates) doesn’t change any of the thinking about this year’s Cubs team. It’s not like they suddenly somehow got worse yesterday. So be as frustrated or annoyed or embarrassed as you like, but what was true before yesterday’s game remains true today: This year’s team had an extremely narrow band of “chance” to compete if a wholllle lot of stuff broke perfectly. That doesn’t seem to be happening, so here we are. This is a team that had a 90% chance of selling at the deadline, and usually the 90% thing in a 90/10 split is the thing that happens. (My calculator indicates that it happens 9 times out of 10 …. )

•   None of that is to say you can’t be angry that this is where things have gone this year. You and I might have a difference of opinion on how realistic it was for the Cubs to make a sure-fire competing team in 2022, but you’re certainly entitled to being chapped. It *sucks* that the Cubs didn’t give themselves more than that 10% shot at competing this year. It *sucks* that they didn’t develop players much more effectively from 2016-2020, that they left themselves in a spot to “have” to sell off completely at the deadline last year, that they were in such a massive talent hole coming into this offseason that people like me could even argue at that point that competing in 2022 was going to be nearly impossible. There were failings. So many failings. They culminated in where things are now, and while I am reasonably hopeful for the future – even as soon as 2023 – it’s not like I’m enjoying this season either.

•   The news on Seiya Suzuki’s finger is tentatively good, but I won’t count any chickens using Seiya’s finger until he’s actually playing this weekend:

The Cubs are cautiously optimistic that Seiya Suzuki will avoid a stint on the injured list after X-rays on his left hand came back negative. https://t.co/xEpuzbu1Ka

•   Suzuki joked: “I got an X-ray here at this facility and they thought I had really nice bones.”

•   Something Codify noticed on Suzuki during his adjustment period – although we really seem to *notice* the called strikes, it’s also that pitchers have figured out how to get more whiffs:

•   If you look at his contact rates during those two periods, it’s not really like there’s a zone that started to get exploited more – instead, it’s that he started whiffing a LOT more on pitches on the outer half. The difference is kinda crazy extreme:

Although we notice the called strikes, something that has REALLY changed for Seiya Suzuki from his first few hot weeks to the last month of struggle – he went from hitting everything in the zone to swinging and missing a TON on pitches on the outer half: pic.twitter.com/Jy3C7Fdb1M

•   Something pitchers have done in their adjustment phase is driving this (I haven’t quite figured it out yet when looking at the pitch data, because I don’t see huge differences in various pitch types/locations). Smarter folks than I can probably ID it, unless it’s a swing issue. I do see there is an overall drop in contact throughout the zone, not solely on the outer half (though that’s clearly the most pronounced area).

•   It won’t always be as bad as it was in the third inning yesterday, but when Justin Steele loses his command for an inning, that’s what it can look like: behind in the count, has to come into the zone, mostly with the fastball (because his slider and curveball are really more swing-and-miss pitches rather than get-me-over pitches), and guys time him up really well. Steele is a strikeout pitcher, yes, but he also induces a load of terrible contact when he’s ahead in the count and guys become defensive. That’s the kind of thing that is true generally for most pitchers, but it sure feels like when he has struggled, it’s come on hard contact in play when behind the count (as opposed to lots of homers, or lots of walks, or zero strikeouts).

Happy anniversary to one of the best and craziest plays you'll ever see. pic.twitter.com/tMd92aagtX