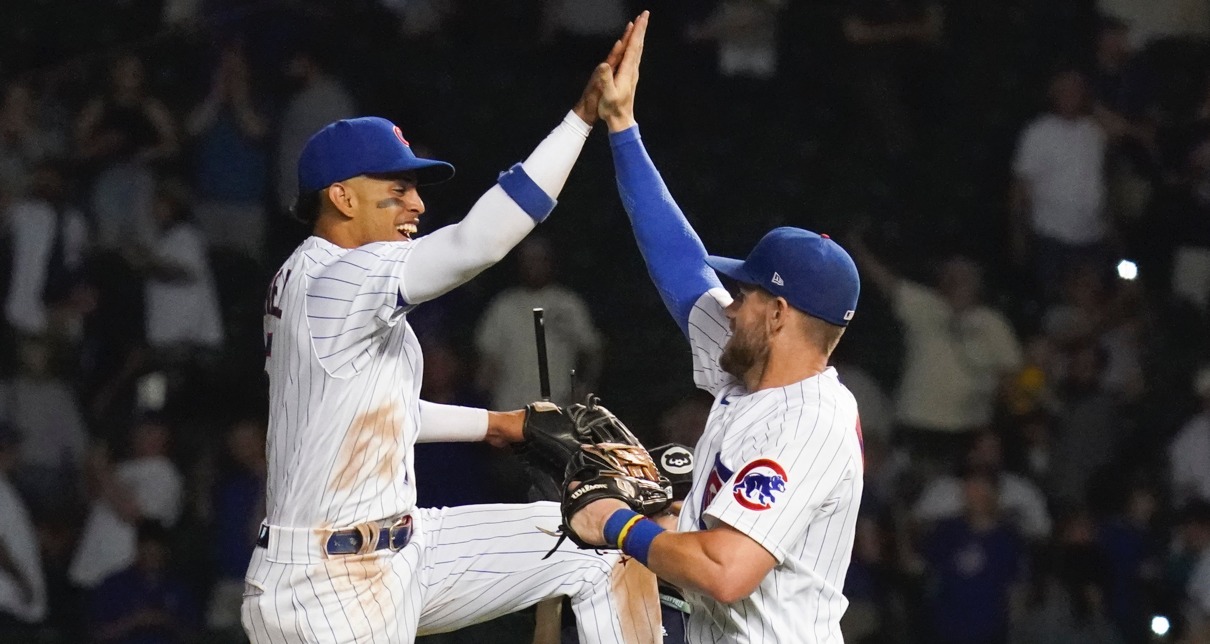 Three game winning streak, baby! Can’t be stopped! You know, if the Cubs can just win the next four games against the Cardinals … and then four more games after that, boom, over .500! (Oh, Brett … )

A few photos from the Cubs 7-5 win over the St. Louis Cardinals at Wrigley Field Thursday in Chicago. pic.twitter.com/nkgZ5CB6cm

•   In just 16 games, Christopher Morel is at 0.5 WAR, just behind Seiya Suzuki (0.6) for second in the NL among position player rookies. Not that we should necessarily start penciling Morel into the Rookie of the Year race – it remains very likely that an adjustment challenge period will come, and possible that he goes to Triple-A Iowa at some point – but if keeps performing at a clip anywhere close to this, he’s gonna wind up a surprise in that conversation.

•   Fun fact? Morel trails one other rookie on the Cubs in WAR … Scott Effross, who is at 0.6. Effross, who was great for two innings last night, is shaking off a bit of a rough stretch. In his previous five outings, he’d given up six earned runs on seven hits and three walks. His season numbers, of course, still remain stellar. His FIP is 1.96. That cracks me up.

•   Nick Madrigal hit a hard, line-drive single to right field last night in the 8th inning. Yes, we’ve reached the point where that merits a specific mention, because that’s how bad things have been. It was the kind of thing we were expecting from him from the jump, but have seen virtually none of. I guess I just try to remind myself that it’s not even 100 PAs yet, but it’s really hard not to keep thinking about the possibility that he needs time at Triple-A at some point.

•   Albert Pujols did not kill the Cubs in a game at Wrigley Field, which is really weird. It’s been a decade, but the guy still haunts my memories when I see him come to the plate in a Cardinals uniform, set against the bricks.

The last @Cubs pitcher to strikeout Albert Pujols as a Cardinal?

Frank the Tank hits his 7th homer of the season! #Cubs take the lead again. pic.twitter.com/cjZl9cIRbM

•   On the importance of getting swinging strikes in the zone (and the evaluation of pitchers therefrom):

Lots of people can create swing/miss OOZ. Hitters do it to themselves a lot. Creating swing/miss IZ is not so simple, and is a strong marker of dominance.

There have been some notable top picks over the last five years that got whiffs OOZ but not IZ. Results have been not great. https://t.co/znkVbjFhAO

•   This Athletic article is about the adjustments Bryce Harper has had to make as a full-time DH (while his elbow recovers from a partially-torn UCL), which I thought would be completely uninteresting. One of the best hitters in baseball has to learn to, you know, just hit. Big whoop. What’s the story? Well, it actually wound up being kind of interesting, and this part in particular stood out to me – it was something Jimmy Rollins told Harper:

Sounds simple, right? Every player knows the adage, predating the reduced emphasis on batting average, that even good hitters fail seven out of 10 times. Harper, though, found making outs as a DH to be particularly frustrating. It bothered him that he could not contribute defensively, help his team in that aspect of the game.

“I took that kind of hard,” Harper said. “But JRoll told me you make outs on both sides of the ball, that when you’re still playing right field you’re still going to get out as a hitter, too. I kind of took that thought and was like, ‘Yeah, you’re right, I can’t take it that hard.’”

Rollins’ exact words were: “It’s not like because you’re DHing, you’re automatically going to bat 1.000. That just doesn’t happen.”

As Rollins recalled, Harper sort of chuckled at his explanation.

“I never thought of it that way,” Harper said.

•   I never thought of it that way, either. When a guy who is used to being an everyday player is suddenly “just” a DH, it’s probably really hard NOT to think about the fact that all you can do is hit. So if you make an out, you can’t do anything else to help your team out in the field. You’ve failed at the only thing you’re there to do. That probably is a bit of a difficult mental adjustment!

•   Teeth stuff, bag stuff, and vacuum stuff are among your Deals of the Day at Amazon. #ad

•   Mike Trout, acknowledging that he might be booed as commissioner, wouldn’t go any deeper on the fantasy football slap heard ’round the world:

“It’s a legendary fantasy football league, that’s for sure.” Mike Trout, the commissioner himself, briefly discussed his role in baseball’s dumbest/funniest story of 2022. https://t.co/mQjsInDHLt

Mets aren't thrilled with the working conditions at Dodger Stadium. According to one Met, the video room is dingy and smells like rat urine. Says it's far below MLB standards.