Justin Steele Was Excellent Last Night Thanks to ... Jon Lester? Skip to content

Before last night, Justin Steele’s most recent opponents made it a little more difficult than usual to properly grade his performance.

Looking back in May, Steele delivered two good starts against the Diamondbacks and a fine one against the Brewers. But Milwaukee (82 wRC+ vs. LHP, 28th) and Arizona (73 wRC+, 30th) are two of the worst offensive teams in baseball against left-handed pitching. And in-between those games, the Reds tagged Steele for 7 earned runs in 2.0 IP.

There’s nothing wrong with the occasional blow up, even against a “bad” team like the Reds. And you can’t take away too much credit from a guy who takes care of business against two teams with an apparent disadvantage against southpaws. But I was still pretty anxious (the worried kind) to see what Steele would do against a team like the Cardinals, who went into last night’s game with an MLB-leading 128 wRC+ against left-handed pitchers.

It wasn’t his best start by game score, but that’s largely due to the lack of strikeouts. But let’s be clear: that was by design. Or at least it was a natural residue of the game plan.

David Ross touched on the process after the game, crediting Willson Contreras and Steele for recognizing the advantage, and we were talking about it throughout the night. But in case you missed the story: Steele went fastball crazy against St. Louis. He ended the game with 71% usage of his four-seamer (56% for the season), and it was much more pronounced early on.

39 four-seamers out of 44 total pitches.

It wasn’t until later in the game when he needed big strikeouts and was facing batters for the third time that he started mixing in his other offerings.

“I think we can trick ourselves into going to other stuff because you feel like you’ve thrown too many of one pitch,” said Ross in the postgame press conference. “And I thought [Contreras and Steele] did a good job tonight of recognizing and sticking with what’s working. You know … ‘If it ain’t broke don’t fix it,’ kind of thought process.”

It certainly wasn’t broke. Steele allowed 25 balls in play last night, 11 were 80.0 MPH or lower. And 17 were beneath the “hard-hit” threshold of 95 MPH. Of the 8 balls in play over 95 MPH, three had negative launch angles and two others were under 10 degrees. In other words, Steele was generating a ton of weak contact, and when there was hard contact, it was on the ground more often than not.

That is how to succeed without relying on strikeout stuff and how you last deep into ballgames. If it wasn’t for some shaky defense behind him (not all of which shows up in the box score), then I think Steele might’ve seen even better results.

Still, this story gets even better than that!

While Ross is right to credit Steele and Contreras for recognizing what was working last night, Steele may have actually gotten the idea from none other than old friend Jon Lester!

“Rossy called me into his office and said Lester called him and had a few tips for me,” Steele said via Jared Wyllys at MLB.com. “One of the main things was establishing the four-seam command, down and in to righties on that inner third of the righties. He said establishing that would kind of open up everything else, and I took that into my next bullpen and was really focusing on that and then took it into the game tonight.”

Well what do you know … 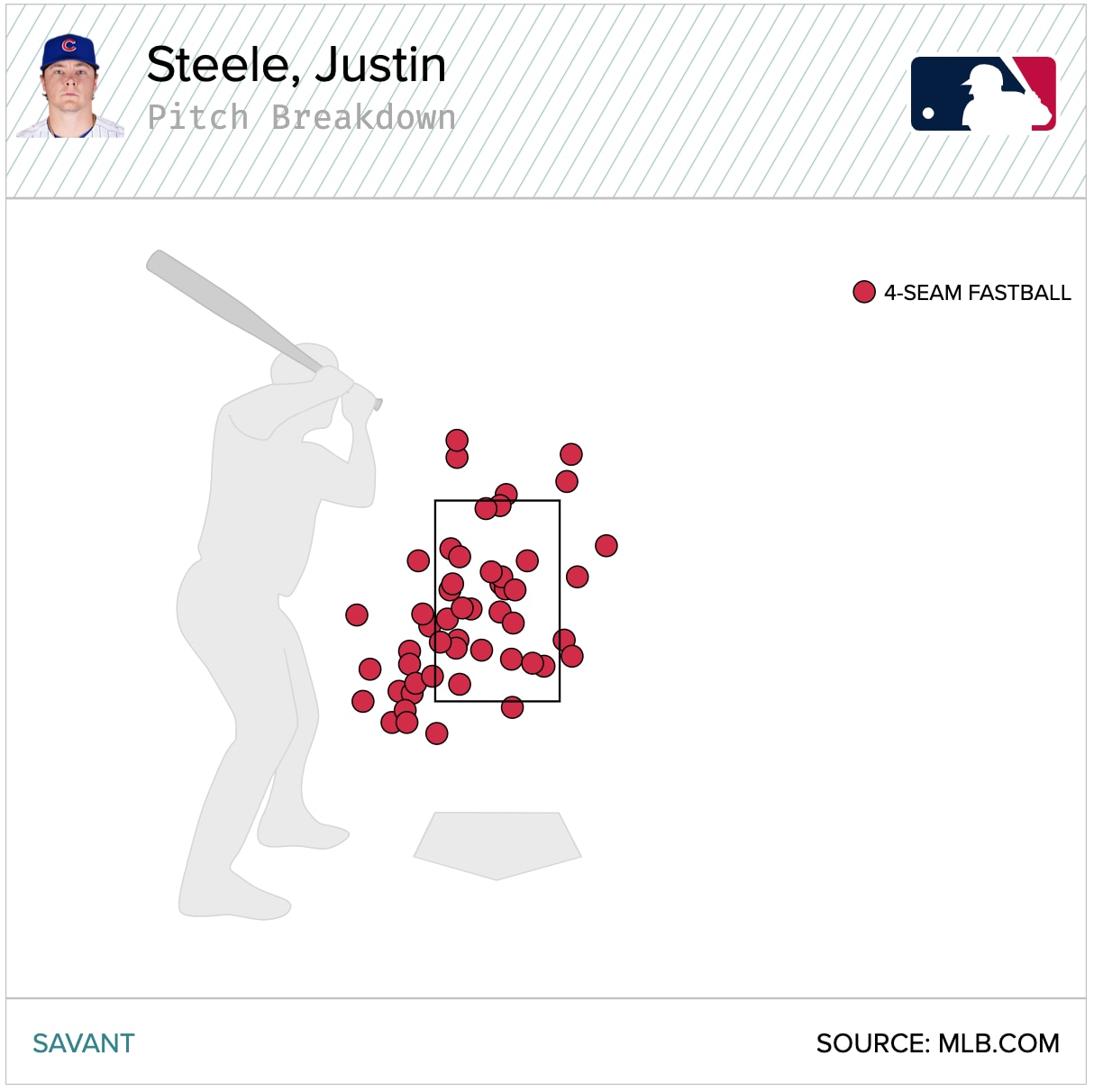 That’s a whole lotta four-seamers in and down to righties!

I suspect Steele will have to mix it up a little more often if his four-seamer isn’t as perfect as it was last night, but this could be a really nice developmental step and a hugely important tip from one of the greatest left-handed pitchers in Cubs history! So … thanks, Jon! That deal is still paying off!