For the First Time in Nearly 20 Years, the Cardinals Will Be Without Yadi Molina Skip to content 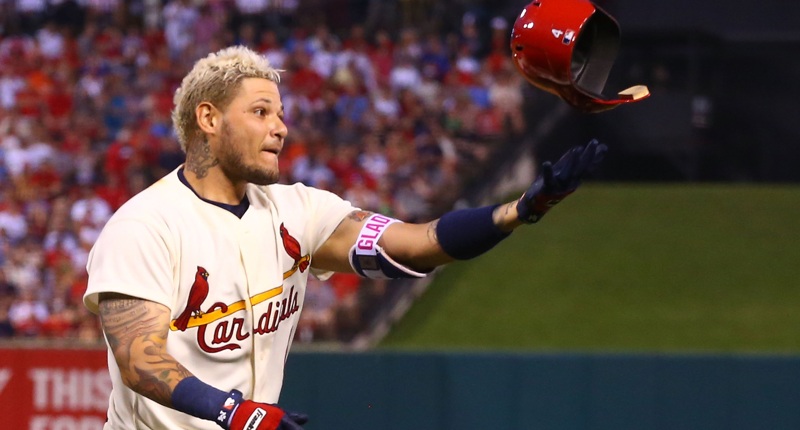 I’ve been thinking a lot about the catching situations in Chicago and St. Louis, and not only because of those monstrous Willson-Contreras-to-the-Cardinals rumors.

With the whole farewell tour for Yadier Molina at top of mind, and with the Cubs, themselves, likely seeing a long-time catcher departing, I’ve been thinking about the nature of the catching position and what provides the most value. We saw at the trade deadline that, while offense at the position is scarce and desirable, a lot of teams will be too scared to bring in a guy (at least midseason) who is viewed as bat-first.

Most of the time, I’d been thinking about this through the Contreras and Cubs lenses (i.e., what’s going to happen with Contreras and what are the Cubs planning to do?). It seems pretty clear at this point that, unless Contreras accepts the Cubs’ Qualifying Offer, the team is going to be moving on, perhaps trying to bring in a catcher – to add to Yan Gomes and P.J. Higgins – whose strongest suits are his defense, his game-calling, his work with pitchers, and his game preparation.

It’s a model we’ve seen other organizations use successfully, including the two teams currently duking it out in the American League Championship Series: using a catcher who is primarily just an extension of the pitching staff and coaching staff, rather than a full-on position player you’re expecting to provide any real value at the plate. Would that be the Cubs’ focus, if Contreras is leaving? It makes some sense, since you can maybe more easily find those guys out there than a guy who is the total package, or even a guy like Contreras who is a very plus bat at a spot where there just aren’t many. Maybe you can find a guy who just works so well with pitchers that he’s adding underlying value every day in ways we can’t exactly articulate from eyeballing his FanGraphs page.

In other words, would the Cubs be trying to emulate what the Cardinals had with Yadi Molina?

That’s what I was thinking about, and then it hit me, in a way it hadn’t before: for first time in two decades, the St. Louis Cardinals are going to enter a season without Yadier Molina behind the plate.

We, of course, know that’s true. We know he’s retiring. That’s what the whole farewell was about. We know they have to replace him. So on and so forth.

But here’s the thing I hadn’t fully considered: If we think it’s true that (1) the underlying stuff is HUGELY valuable, and (2) Molina is an all-timer at that stuff … shouldn’t his retirement REALLY hurt the Cardinals? Like, in ways just as disproportionately harmful now, as his value over the years has been – according to people in the game – disproportionately valuable? And thus, isn’t this all the more reason for the Cubs to be aggressive toward competing in the NL Central in 2023?

To put a finer point on it: are we sleeping on just how much it’s going to sting the Cardinals’ pitching staff to lose Yadi Molina?

After all, it has been years and years and years of hearing how uniquely special Molina is, and how much he does for the organization in ways we can’t properly evaluate with modern statistical analysis. Either that was a load of fluffy BS, or the Cardinals are about to have to try to replace one of the most valuable players in the game, at a position where finding outsized value can be particularly challenging.

Maybe that winds up leading them to Contreras in free agency, and maybe we’ll find out that it’s actually the Cardinals organization that was good at getting that kind of value out of a catcher like Molina, rather than the other way around.

But whatever the Cardinals do, this is a major change that they’ve not had to confront since 2003 and 2004. The more I think about it, I would be at least a little nervous if I were a Cardinals fan.

And as Cubs fans, it’s kinda win-win for us: either the Cardinals’ performance suffers for losing Molina, or it doesn’t, and we know for sure that a lot of the ‘Yadi Molina is Singularly Important in the Universe’ hero stuff was always hooey.

… well, unless the Cardinals DO sign Contreras and he becomes a defensive monster, while staying a beast at the plate. That’s definitely not a win-win for Cubs fans.