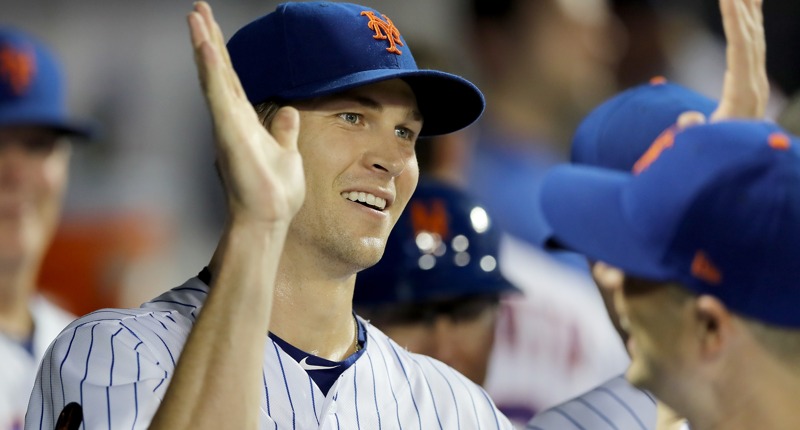 The mention earlier this week by Dave Kaplan that the Cubs would be into Aaron Judge and Jacob deGrom on shorter-term deals really caught my ear and is kinda sticking in there. On Judge, the mentioned five-year-type deal is almost certainly not going to be long enough, even if the Cubs went hog on the AAV. So I’m not saying I *ignore* that part, I just don’t see it mattering. Judge still feels very unlikely for the Cubs.

But the deGrom part still has its hooks in me, because the mentioned three years is NOT viewed as absurdly short by those who’ve speculated on a contract. Although he’s much younger than his rotation-mate Max Scherzer, his vastly more robust injury history has a lot of folks thinking that deGrom’s realistic target could be a deal similar to Scherzer’s, but a little better in one way or another. Scherzer got three years and $130 million, so maybe that means deGrom seeks a four+ year deal, and maybe he can get four years. Or maybe it means he can only get a three-year deal, but tops Scherzer’s $43.3 million AAV.

In either case, if Kaplan’s report is correct, then it seems like the Cubs actually could be in those conversations with deGrom.

But for a couple reasons, that’s not the only factor at play, even if you can land MOST free agents if you were willing to blow the next highest offer of the water. Still probably true in deGrom’s case (though you do have to draw the line somewhere), but not necessarily true.

For another thing, deGrom is a lifelong New York Met, and it’s never actually been clear that opting out of his current deal is about more than just getting more money from the Mets. In other words, we don’t actually know for sure that he REALLY wants to shop around in free agency at all. He has been notoriously mum about his plans (beyond opting out), and there really haven’t been a ton of rumors on that front. Heck, I’ve seen conflicting theories among fans and pundits about deGrom loving it in New York or hating it in New York. It’s been pretty muddy to try to evaluate, so I’m mostly avoided it.

On that front, though, we get at least one clue now? And it may point toward deGrom’s first preference being to just stay with the Mets:

If Zack Wheeler’s sense from his conversation with deGrom is correct – that deGrom is happy and wants to stay if he can just get his contract “corrected” – then deGrom wouldn’t be leaving the Mets because he PREFERS to play elsewhere. It would simply be about making sure he gets the right next contract from the Mets.

deGrom’s current deal would pay him about $65 million over the next two years if things went right for him (guaranteed in 2023, team option in 2024). He can obviously do a lot better than that now, and I think if you’re the Mets, having already given Scherzer his deal, you’d be hard-pressed to argue deGrom doesn’t at least deserve the same (yes, Scherzer has been way more durable, but he was also older and not the literal best pitcher on the planet when healthy).

Maybe that’s all it will take, and deGrom and the Mets will settle this thing before he really even hits the market. We know Steve Cohen has the money and the desire.

Of course, I’m just over here hoping very much that doesn’t happen. Whether the Cubs get seriously involved on deGrom or not (though I deeply hope they do), his presence on the market would affect them. Maybe you get the Mets and another club or two really locked up in trying to land deGrom – so they have to wait – while the Cubs swoop in and land a couple other top arms. I’m not staying it’s likely, just that it’s possible *IF* deGrom truly hits the market.