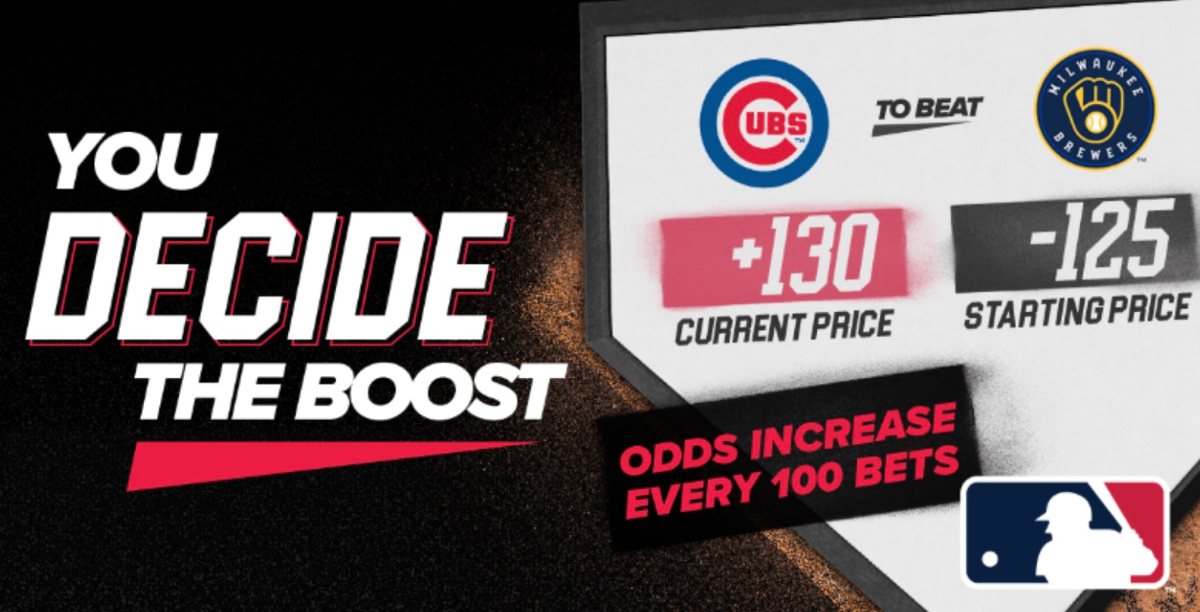 There’s little doubt that you’re probably rooting for the Cubs this Opening Day, but PointsBet is giving bettors in Indiana and Iowa some added incentive to do so when they take on the Brewers.

PointsBet, which has not yet launched on the Illinois online sports betting market (BetRivers is your only option right now), is one of the more creative online sportsbooks when it comes to betting specials.  Certainly, that creativity is on display with its latest offer, a Cubs Opening Day Crowd Boost.

Click here to sign up for PointsBet, grab a great new user bonus, and get the Cubs at significantly boosted Opening Day odds.

The Cubs opened as a -125 moneyline favorite over the Brewers on Opening Day, but that won’t be the price bettors at PointsBet will get thanks to this crowd boost promo.

Here’s how it works.

For every 100 bettors who back the Cubs at PointsBet, the odds will move in the bettors’ favor.

As of late Wednesday night, the odds have shifted from -131 all the way to +125. As first pitch draws closer, it’s extremely likely that more bettors will jump in to back the Cubs, creating an even more advantageous line.

Ultimately, it’s likely the odds will settle somewhere beyond the +150 range.

Best of all, there’s no reason to wait.

That’s because PointsBet will give all Indiana and Iowa bettors who are a part of this promotion the final (and best) price.

So, what exactly does this all mean?

Conservatively, let’s figure the final odds close at +150. Typically, a bettor would have to risk $62.50 to win $50. With this special, however, a bettor risking $50 would win $75. In turn, this special creates extremely advantageous odds for Cubs bettors, requiring far less risk for a far greater return. The other intriguing PointsBet baseball offer runs through the end of July. Bettors who place at least a $50 pregame moneyline or runline wager have an opportunity to cash an additional $10 payout each time that team homers.

In a less ideal scenario, let’s say the bet loses, but the Cubs still manage to hit four homers. The loss is a bummer, but the $40 homer boost certainly helps to take the sting out of this hypothetical loss.

Chicago will have a different look this Opening Day as this year marks the first time since 2016 that Jon Lester won’t take the ball in game one. Instead, Kyle Hendricks (11-10, 3.46 ERA in 2019) will get the call. While he was winless in two starts against the Brewers last season, the Cubs have won 60% of Hendricks’ starts when they’re favored since the start of the 2018 season.

Opposite Hendricks will be Brewers ace Brandon Woodruff, who was excellent in an abbreviated 2019 campaign. He recorded an 11-3 mark with a 3.62 ERA. He struggled in his only start against the Cubs last season, but the Brewers are a perfect 6-0 as a road underdog when he starts. Certainly, that would help explain why the Cubs aren’t so strongly favored at PointsBet.

Click here to sign up for PointsBet, grab a great new user bonus, and get the Cubs at significantly boosted Opening Day odds.