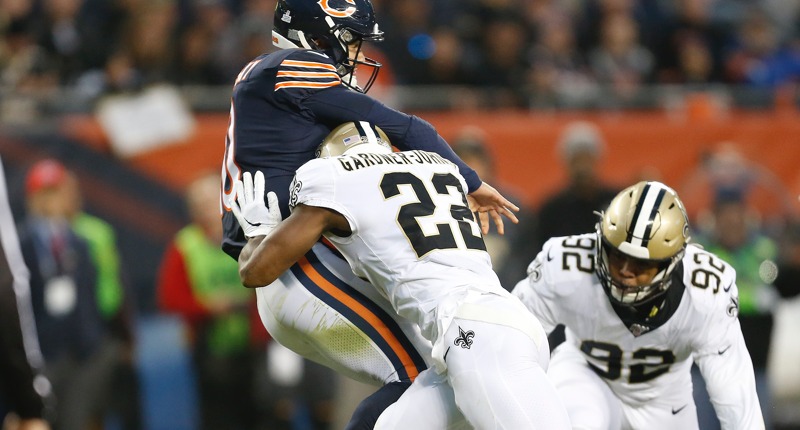 Chicago was blown out by one of the NFC’s elite teams in its high-stakes regular season finale. Fortunately for the Bears, they live to fight another week by virtue of the Rams’ victory over the Cardinals. Unfortunately for the Bears, they now must travel to New Orleans where they will face another of the conference’s elite teams in the Saints. Indeed, Chicago’s roller coaster of a season will continue in the NFC wild card round on Sunday afternoon. Despite the Bears’ tightly contested 26-23 overtime loss to the Saints in November, oddsmakers don’t appear too bullish on the prospect of the ride lasting much longer. Ahead of the opening weekend of postseason action, let’s check out the current Bears vs. Saints odds for this NFC wild card game.

The Bears vs. Saints line shows the Saints are currently favored by 10 points. The game total is set at 47.5 points. New Orleans is a -500 moneyline favorite, while Chicago is +400 on the moneyline.

Illinois bettors who backed the Bears (8-8) to cover as a four-point underdog against the Packers in Week 17 had to like their chances for awhile. That is until the Packers ran away in the fourth quarter on the way to a convincing 35-16 victory. Meanwhile, New Orleans (12-4) rolled over Carolina by a 33-7 margin in Week 17. Missing their top running backs, the Saints still managed 156 rushing yards and Drew Brees added three scores through the air.

Notably, the Saints knocked off the Bears in a 26-23 overtime victory at Soldier Field back on Nov. 1, but New Orleans failed to cover as a 4.5-point favorite.

Be sure to check out our complete Bears odds page, featuring Super Bowl odds, postseason and player prop odds.

Here are the current Bears vs. Saints odds, courtesy of DraftKings Sportsbook.

The Saints opened as an 8.5-point favorite over the Bears on Sunday night, but the line quickly jumped to -9.5 at books such as William Hill as quickly as Monday morning. By Thursday afternoon, with the money coming in heavily on the Saints, the spread reached double digits at -10.

The great unknown is the availability of Saints running back Alvin Kamara, who missed Week 17 after being placed on the reserve/COVID list. For now, there appears to be some optimism that he will play. At the very least, he will be eligible to return as it relates to timing protocol. Also expected back for New Orleans is top wide receiver Michael Thomas, so the Saints are getting healthy on the offensive side of the football at the right time.

In the November meeting between these two teams, Kamara totaled 163 yards from scrimmage, aided by a nine-catch, 96-yard performance. Drew Brees paced the Saints offense by completing 31 of 41 pass attempts for 280 yards and two touchdown passes. Chicago, meanwhile, will have a different quarterback under center this time around. Nick Foles completed 28 of 41 attempts for 272 yards and two scores in the first meeting.

In terms of overall ATS performance, the Bears are 8-8 ATS. The Saints are 9-7 ATS.

The over-under is set at 47.5 points at sportsbooks such as PointsBet.

The Bears were one of the worst “over” bets in all of the NFL this season until roughly a month ago. After a late score busted the number in Week 17, the total has gone over in five of the Bears’ last six games. For the season, the over is 8-8 in games featuring Chicago, while the over is 10-6 in games featuring New Orleans.

Unsurprisingly, New Orleans is drawing the majority of bets and money. The Saints are one of the betting public’s favorite teams. There’s no doubt that New Orleans is laying a ton of points in this spot, but the public wants to bet on the explosive Saints. That’s why they’re getting 59% of all point spread bets and 64% of the money. They are also drawing 82% of all moneyline bets and 92% of the handle.

In terms of the total, 67% of bets and money side with the over.

Bears vs. Saints props are slowly coming out. Here are some offerings over at DraftKings Sportsbook.