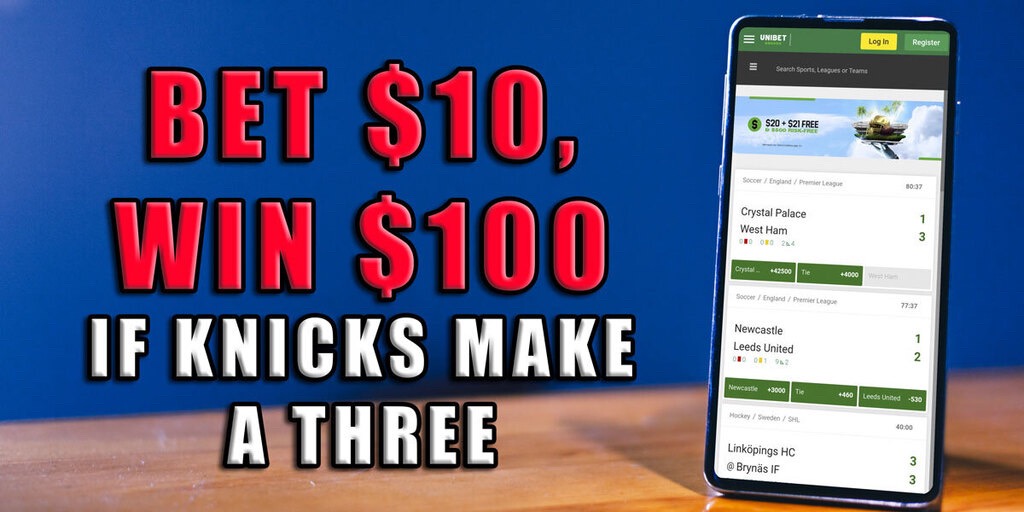 Unibet has an outstanding new player offer for those in Indiana and New Jersey who sign up ahead of this Saturday’s NBA matchup between the New York Knicks and Indiana Pacers.

New players who register with Unibet in states such as Indiana and New Jersey can grab +1000 odds on their team to make at least one three-pointer this weekend. This 10x payout activates when IN bettors wager at least $10 on the Pacers moneyline, while NJ players can get the same deal on the Knicks.

Frankly, the ability to grab such outrageous odds (a 10x payout) on an outcome that is a virtual lock presents no-brainer value. In short, when these teams make their first three of the game — and they will make a three  —  Unibet will turn a $10 bet into a $100 payout.

If you even loosely follow the NBA, you know that emphasis on the three-pointer is at an all-time high. You also know that even the poorest long-distance shooting teams are good for multiple makes from beyond the arc. That’s good news for bettors who sign up with Unibet in Indiana and New Jersey then, as both teams are basically a lock to grab a $100 bonus.

Click here and  use promo code UNIPACERS to register with Unibet Indiana and grab +1000 odds on the Pacers to make at least one three-pointer. Get the same offer on the Knicks in NJ here with promo code UNIKNICKS.

The setup here is fairly simple. New players who register with Unibet Indiana ahead of this Saturday’s NBA regular season matchup between the Knicks and Pacers can grab no-brainer odds on the Pacers to drain at least one three-pointer. Those in NJ can get the same special on the Knicks.

This offer is available to new players in both New Jersey and Indiana who are at least 21 years of age. If (when) the Knicks or Pacers make a three, Unibet will pay out a $100 bonus to players within 72 hours of the game’s completion.

This promo is live now through 7 p.m. ET on Saturday night, so there’s no need to wait if you’re looking to grab this bonus.

How to Claim Unibet Sportsbook Bonus

To get this offer, complete the following quick and easy steps:

We probably don’t need to do a deep dive on why this offer is ridiculously good, but here are some relevant stats to know:

In short, this bet is going to cash, and, frankly, it’s probably going to cash early on in the game, so there will be no need to sweat it out.

Click here and  use promo code UNIPACERS to register with Unibet Indiana and grab +1000 odds on the Pacers to make at least one three-pointer. Get the same offer on the Knicks in NJ here with promo code UNIKNICKS.