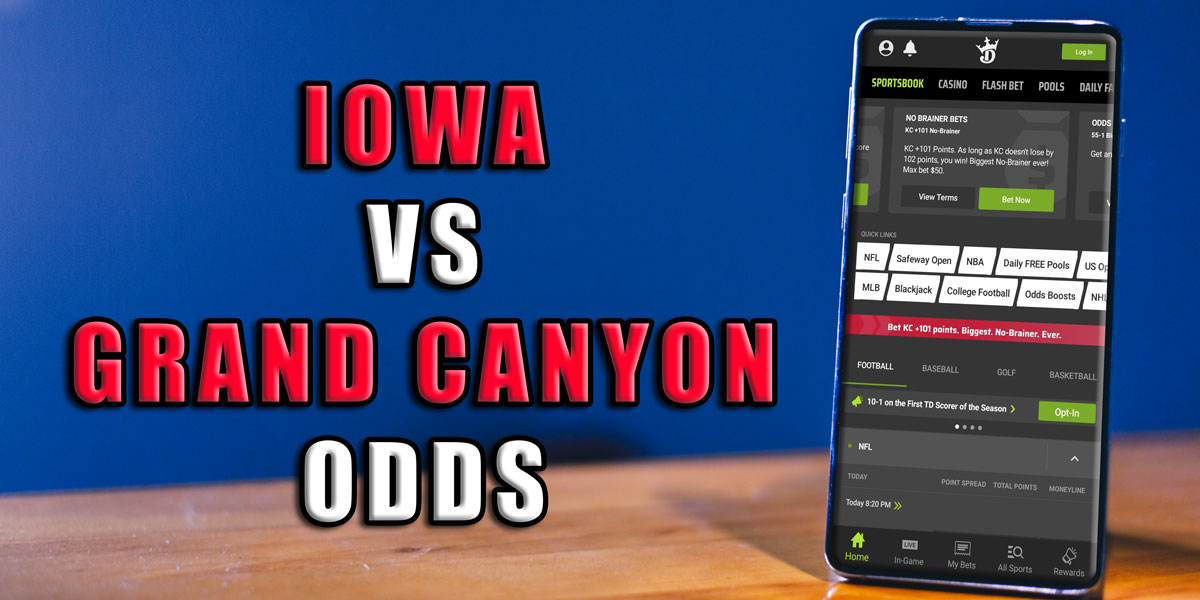 The 2021 NCAA Tournament is finally here. Let’s dive into the Iowa vs. Grand Canyon line and odds.

The current Iowa vs. Grand Canyon odds show that the Hawkeyes enter their first round matchup as a 15-point and -1667 moneyline favorite. Meanwhile, Grand Canyon is +900 on the moneyline. The game total is set at 145 points.

Iowa most recently lost to Illinois in the semifinal round of the Big Ten championship. Of  course, the Fighting Illini went on to beat Ohio State in the Big Ten Championship.

The Hawkeyes are officially a No. 2 seed in the tournament and draw Grand Canyon as a 15-seed. On Saturday, Grand Canyon defeated New Mexico State to win the Western Athletic Conference Championship. Still, this is a team that enters the NCAA Tournament at +30000 to win it all.

That’s likely because it feels highly improbable that they survive the first round.

Sign up with DraftKings Sportsbook by clicking right here and grab 64-1 odds (Bet $4, win $256) on any NCAA Tournament upset in the First Round.

Here is the opening line for the Iowa-Grand Canyon matchup in the First Round of the 2021 NCAA Tournament.

Check back throughout the week for updates in regard to the line and spread.

Per DraftKings Sportsbook, Iowa opens up as a 15-point favorite over Grand Canyon.

Iowa has been one of the more impressive squads this entire season with the sensation that is Luka Garza (24.9 points and 9.4 rebounds per game on 57.4% shooting from the field) leading the way.

While he has some detractors, Garza has been one of college basketball’s most dominant players.

The Hawkeyes haven’t covered in two of their last three games (one game was a push) while the Antelope (yes, Grand Canyon’s mascot) have covered in four of their last five matchups. They’ve been a cover machine.

If you’re looking to shorten things up, know that the first-half spread on DraftKings Sportsbook has Iowa as a 9-point favorite.

Click here to get a $1,000 risk-free first bet on the NCAA Tournament with FanDuel Sportsbook.

Obviously, Iowa possesses much more talent and underwent a more impressive season than its upcoming opponent. Iowa finished with a 21-8 overall record and Grand Canyon was 17-6 outright.

For what it’s worth, the No. 2 seed is 132-8 outright all-time against 15-seeds, which should provide enough context for who you want to bet on to advance in this matchup.

The Iowa vs. Grand Canyon total, per DraftKings Sportsbook, is set at 145 points.

Iowa is averaging a whopping 83.8 points of their own per game while Grand Canyon is averaging 75.6 points. Both of these teams can fill it up.

The first-half total is set to over-under 67.5.

No player prop bets have been revealed for this upcoming matchup as of Sunday night, but there are numerous team and game props available.

Will there be overtime?

Register with PointsBet and grab a $150 March Madness bonus by clicking here .