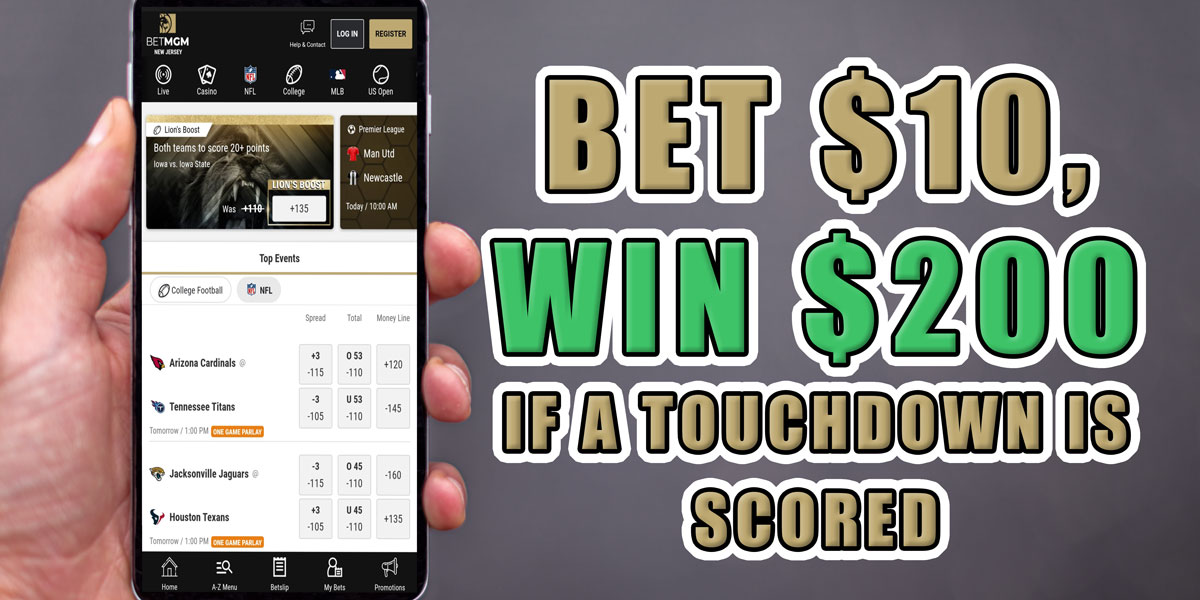 BetMGM is rolling out an exceptional promo once again ahead of a stacked slate of NFL Week 3 games. Given the number of touchdowns scored across Week 1 and Week 2 of the regular season, it stands to reason this touchdown bonus will pay out for many new users.

With the Bet $10, Win $200 bonus being offered by BetMGM, users can earn a $200 bonus if the team of their choosing scores a touchdown in Week 3.

Through the first two weeks of the NFL regular season, there have only been four instances in which a team has failed to find the endzone. That means an NFL team has scored a touchdown in 60 of the 64 opportunities across 32 games.

Thus far, teams in the NFL have had varying degrees of success finding the endzone, but it’s happened in 93.8% of all contests through the first two weeks of the season.

In Week 1, the Atlanta Falcons failed to score a TD against the Philadelphia Eagles, while the Green Bay Packers were unable to do so against the New Orleans Saints. In Week 2, the Miami Dolphins were shut out 35-0 at home by the Buffalo Bills. The New York Jets couldn’t find pay dirt at home against the New England Patriots.

This is all to say that there’s an extremely high likelihood that a large number of NFL teams will score a touchdown in Week 3. In fact, BetMGM currently has six games listed with a total points O/U of 49.5+ points. Three games have an O/U of 55.5 points, including the Tampa Bay Buccaneers vs. Los Angeles Rams, Los Angeles Chargers vs. Kansas City Chiefs, and Seattle Seahawks vs. Minnesota Vikings.

Remember, the $10 wager being placed is on the team you believe will score a touchdown and will pay out $200 if the bet wins regardless of whether your selected team wins.

In order to get in on the action with BetMGM’s Bet $10, Win $200 promo, you’ll first need to register for a new sportsbook account. The process takes mere minutes to complete and is a simple one to finish.

Sit back and enjoy the game. If your team scores a touchdown, you’ll earn a 20x return on your initial $10 bet.

The King of Sportsbooks

If you’ve been anywhere near a TV, computer, or radio, chances are you’ve seen or heard an ad featuring Jamie Foxx touting BetMGM as “The King of Sportsbooks”.

Catch every blitz, fumble, field goal, and touchdown with @BetMGM. This football season, surround yourself with #TheKingOfSportsbooks.pic.twitter.com/GM0YfDyEjq

Given their fantastic promos and odds boosts, BetMGM has gained legitimate traction in a number of markets where legal online sports betting is offered.

BetMGM’s Bet $10, Win $200 bonus is one of the best no-brainer new user promos available. There’s no guarantee this offer will be brought back for Week 4 of the NFL season. So if you’re considering signing up, now could be the best time to do so.

Russ Joy is a sports betting editor for XL Media PLC, co-host of Snow The Goalie: A Flyers Podcast, a Flyers writer for CrossingBroad.com, and the Crossing Broad Podcast Network Director. A graduate of West Chester University of PA and California University of PA. Russ is also a husband and father of three. Follow him on Twitter: @JoyOnBroad Email: [email protected]