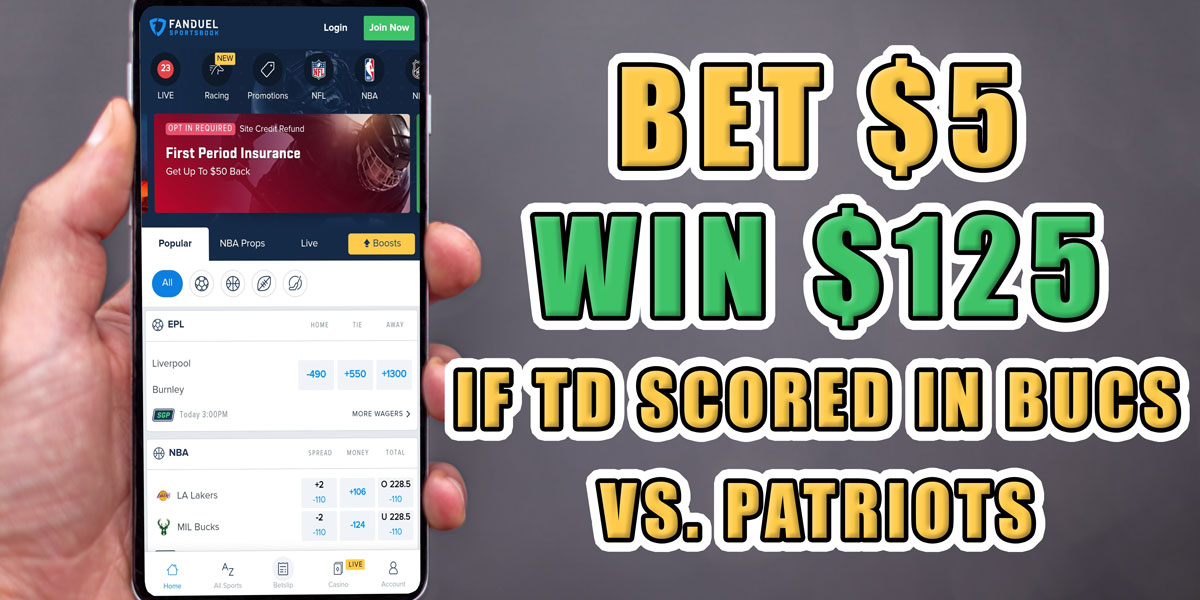 This week’s Sunday Night Football game will garner plenty of attention as Tom Brady leads the Tampa Bay Buccaneers into Foxboro to take on his former team the New England Patriots. FanDuel Sportsbook is offering a no-brainer promo to celebrate.

New users who sign up with FanDuel Sportsbook can Bet $5, Win $125 with the “GOAT Boost” if the Bucs or Pats score a touchdown.  The best part is that this bet pays out winnings in cash, rather than site credit.

When it comes to no-brainer bets with a low cost of entry, this GOAT Boost from FanDuel Sportsbook provides tremendous upside in the form of a cash payout. Given the fact that Brady’s squad has scored multiple touchdowns in every game this season, it’s likely his team will do it again on Sunday night, making any new user who opts-in a winner as part of this GOAT Boost promo.

Click here to sign up with FanDuel Sportsbook and Bet $5, Win $125 if a touchdown is scored on Sunday Night Football.

Love him or hate him, it’s tough to argue that Tom Brady has established himself as the GOAT quarterback in NFL history. Leaving the only team he’d ever known to lead a Tampa Bay Buccaneers team, there was plenty of uncertainty. Then he hoisted the Lombardi Trophy for the seventh time in his career. Meanwhile, his former team finished under .500 and missed the postseason.

Now, Brady returns to New England to take on his former team as the GOAT QB squares off against arguably the GOAT head coach. One thing that can’t be argued, however, is the incredible value of the GOAT Boost from FanDuel Sportsbook.

It stands to reason that one or both teams will score a touchdown, which would make any new user who signs up and participates in the GOAT Boost promo a winner of $125 cash on a $5 bet.

Prospective bettors interested in taking advantage of the GOAT Boost no-brainer promo must first sign up for a FanDuel Sportsbook account. The process is simple and takes mere minutes to complete.

Remember, the outcome of  the game is irrelevant to this bet paying out $125 in cash. As long as either team scores a touchdown, your bet will be a winner.

The build-up to this game is expected to be intense as Tom Brady and Rob Gronkowski head into Foxboro to square off against their former head coach Bill Belichick.

It’s unlikely that the media will get much out of the curmudgeonly coach. Anyone expecting a warm and fuzzy embrace at midfield are likely to be disappointed.

It remains to be seen how rookie QB Mac Jones will fare in this head-to-head matchup against the GOAT, but that’s just one of the many storylines likely to be highlighted on Sunday Night Football.

Sign up with FanDuel Sportsbook and Bet $5, Win $125 if a touchdown is scored on Sunday Night Football when you click here.

Russ Joy is a sports betting editor for XL Media PLC, co-host of Snow The Goalie: A Flyers Podcast, a Flyers writer for CrossingBroad.com, and the Crossing Broad Podcast Network Director. A graduate of West Chester University of PA and California University of PA. Russ is also a husband and father of three. Follow him on Twitter: @JoyOnBroad Email: [email protected]