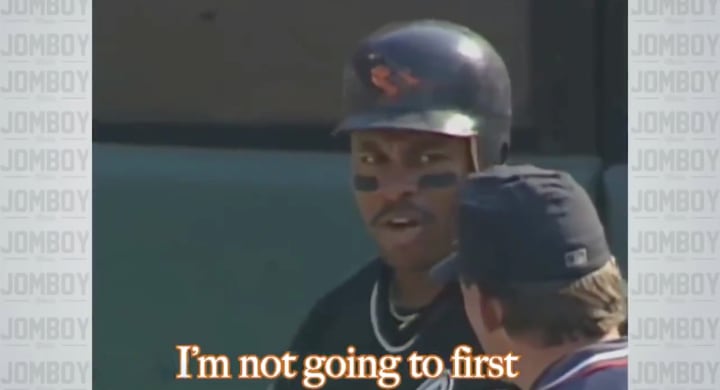 Sadly – or rather, unfairly, I’d say – baseball players don’t really get any credit for their physical toughness. I understand why people gravitate toward football and hockey players in this respect, but man … why don’t you ask Anthony Rizzo what it feels like to get hit with a 95 MPH fastball 30 times a year or Willson Contreras how it feels to get trucked by some 250lb right fielder on a play at the plate. They’re tough dudes. We know that.

Buuuuuut maybe they’re not quite as tough as they used to be (please don’t send this to any MLB players).

Take Albert Belle, for example, the Orioles right fielder, who in 1999 refused to accept his hit by pitch, which pretty clearly hit him on the hand, because he wanted to be the guy to get the final, walk-off swing in extra-innings.

Now before you find me in the comments, I’m not saying this is the last time a guy refused a free base because he wanted the bat, but 1) … come on, that’s pretty bada** and 2) he’s literally arguing with the ump, his manager, the opposing battery … everyone. He just wants a chance to swing.

And I love it:

Albert Belle refuses to take first after being hit by a pitch, a breakdown pic.twitter.com/6hlEPfDW0s

The best quote? “Throw the motherf***ing ball over the f***ing plate, aight?”