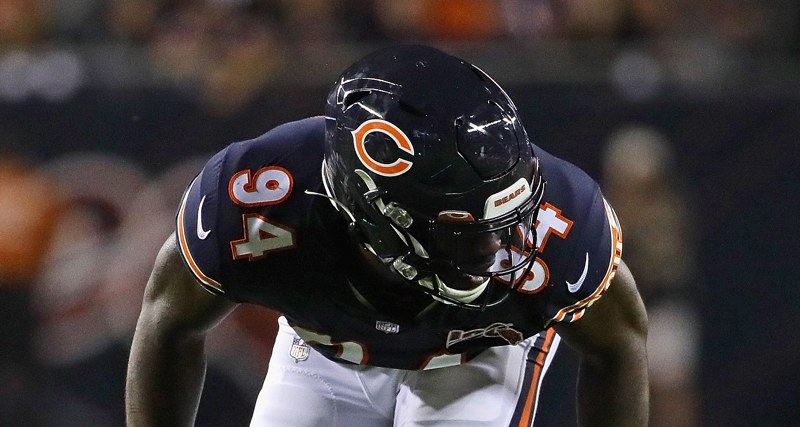 So, let’s celebrate his birthday with some highlights:

Floyd came up with two sacks, two tackles-for-loss, and two quarterback hits in the Bears’ Week 1 loss against the Packers. He was consistently causing havoc in the Packers backfield and showed some real push against their offensive line. It was a strong performance from a first-round pick who has flashed here and there, but has yet to put it all together for a complete season. Which brings us to what feels like an annual question we find ourselves asking — is Floyd ready for a breakout season?

In his last 11 games (including the playoffs), Floyd has collected seven sacks, 11 tackles-for-loss, and 14 quarterback hits. That 11-game sample coincides with Floyd being fully healthy and playing without the limitations of a cast on his hand. Extrapolate those numbers over a full 16-game season, and they look something like this: 10 sacks, 16 tackles-for-loss, 20 quarterback hits. That is a stat line that only seven players achieved last season. Among them are Aaron Donald and J.J. Watt. So, yeah, it would constitute a breakout year if Floyd could put up those numbers.

Floyd took positive steps last season by completing a full 16-game schedule without missing any, but his season was a tale of two halves. The struggles of a first-half in which he played with a cast on his hand feel like a distant memory, while the sample of games where Floyd has played without limitations is fresh in our minds and has looked really good. Recency bias might be in play here, but it would be unfair to judge Floyd’s lack of production when he was injured on the same grading scale as what he showed when he was healthy. If Floyd’s last 11 games are any indication of what could be coming down the pipeline now that he has a clean bill of health, then perhaps the stars are aligning for him reach his potential in 2019.