2020 Bears Offseason Outlook: Fixing a Broken Offensive Line Should Be the Priority Skip to content 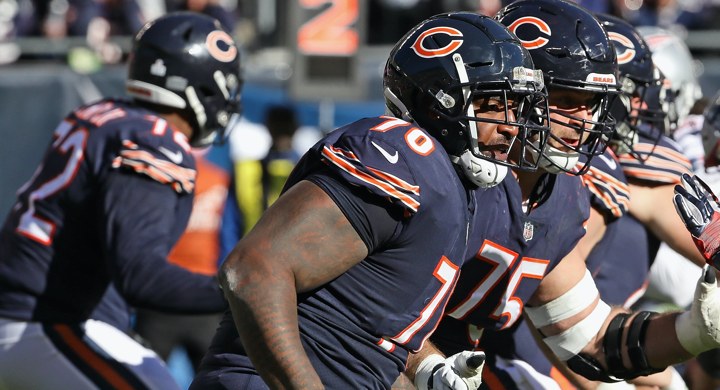 Cody Whitehair, Charles Leno Jr., Bobby Massie, and James Daniels are locked into contracts for the 2020 season. Having four-fifths of your starters up front returning is often viewed as a good thing, but 2019 was a struggle for this group as a collective. Injuries, uneven and ineffective play, in-season position switches, and starting a converted nose tackle at right guard for most of the year were among the things that kept this unit from playing to its potential.

An optimist would point out the Bears are just one year removed from having four of five linemen return who were part of what PFF viewed as a top-10 line entering the season.

The pessimist, however, *gestures in the general direction of the 2019 season*

Reserves T.J. Clemmings, Ted Larsen, and Cornelius Lucas are unrestricted free agents. Rashaad Coward is an exclusive-rights free agent, which means he has completed few than three accrued seasons and can negotiation with only the Bears.

Kyle Long is exiting, but not as a free agent. He is retiring.

Leno (before 2017) and Massie (before free agency opened up in 2019) signed extensions so recently that it essentially eliminates the possibility of either being cut for the purpose of creating cap space.

Cutting Leno and Massie – while being a popular take in some social media circles – isn’t feasible for a number of reasons. For starters, cutting Leno will create just $2.39M in cap savings. That is hardly enough of a savings to justify cutting a starting-caliber left tackle without an in-house replacement who can do the gig as well as Leno has during his time as a starter. As for cutting Massie would actually cause the Bears to *LOSE* financial wiggle room. Dropping Massie’s contract would cost the Bears $4.31M in cap space.

Long story, short: Leno and Massie will almost certainly be on the 2020 Bears roster.

Before heading into free agency or the NFL Draft for fixes, the Bears have some housekeeping to do. Figuring out where James Daniels and Cody Whitehair are going to play in 2020 (and beyond!) should be a priority.

Is Daniels your center? If so, are the Bears best suited to flank him with veterans like Whitehair on his left side and a free agent to be named later to his right? And if Whitehair is the center, should free agency or the draft be where the Bears find a player to boost the line? Is there a scenario where new OL Coach Juan Castillo views both Whitehair and Daniels as guards in his system, which would open up a spot at center. This could go in any number of ways.

Joe Thuney (New England) and Brandon Scherff (Washington) are the top guards available on the free agent market. Both have graded out well, which means they should be well compensated when they hit free agency. Otherwise, the Bears could turn to the draft, a place where they have drafted starting-caliber interior linemen in Round 2 in prior years. Doing so again would allow the team to spend its available cap dollars elsewhere.

In the end, replacing Long in the lineup is the obvious hurdle the front office must clear as it attempts to get the offensive line back in good shape. Because the skill position players (Mitch Trubisky, David Montgomery, Allen Robinson, Tarik Cohen, Anthony Miller, a tight end to be named at some point down the line) will be only as successful as the time given to them by the offensive line to get into the open field.

But finding possible down-the-line replacements for Leno and Massie is something GM Ryan Pace and his staff should consider doing this offseason, too. Knocking off these two items off the wish list might seem like a big ask, but that Chicago can go about doing it in different ways should be viewed as good news.