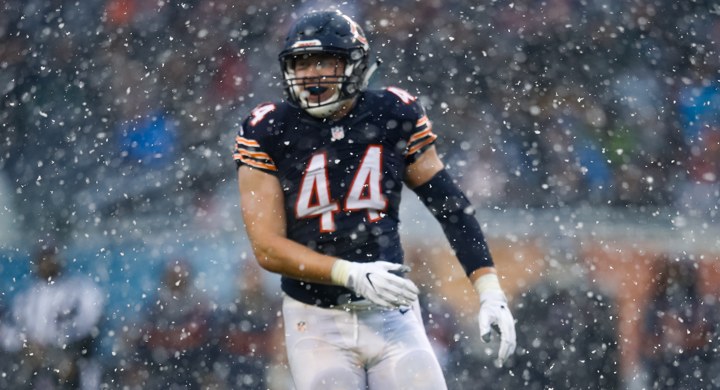 Every year – without fail – we’re left scratching our heads at a handful of free agent contracts that exceed or alter our expectations for certain players. This year will be no different. But to prepare ourselves now for that inevitable feeling in March, Albert Breer of Sports Illustrated offers up a list of under-the-radar free agents on the cusp of cashing significant checks when the market opens up. Among them is Chicago Bears inside linebacker Nick Kwiatkoski.

Here’s what Breer had to say:

“Here’s the guy who’d never really gotten the chance to be a full-time starter, then did… at just the right time. The fourth-year former fourth-round pick started Chicago’s final seven games and showed that he can play the middle for someone, and he could get paid after guys like Cory Littleton and Joe Schobert come off the board. And maybe that someone will be his old coordinator, Vic Fangio in Denver.”

As a point of reference, PFF has Littleton as the top-ranked linebacker in this free agent class. OverTheCap.com projects him to get a four-year deal with $30 million guaranteed and up to $48 million overall. Schobert comes in behind Littleton, with a projected contract of $44 million over four years with $27 million guaranteed. Those guys sit at the top of free agent pecking order, but their free agent success could trickle-down to positively impact Kwiatkoski. And the more I think about it, the easier it is to envision.

Last year, Earl Thomas, Landon Collins, and Tyrann Mathieu set a high bar as free agents who signed with different teams. That trickle-down impacted the likes of Adrian Amos and Lamarcus Joyner, a pair of safeties who were a cut below the top-rated bunch, but worthy of lucrative multi-year deals. Things could play out similarly if Littleton and Schobert get market-shifting deals as part of the first wave of free agency. If it does, it would leave Kwiatkoski in a position to land a deal as part of that second burst of free agent spending. After all, it takes just one team to feel a sense of urgency to come away with something after possibly missing out on one of the other two. And, of course, Vangio, mentioned by Breer, has intimate familiarity with his former player.

Even still … Kwiatkoski should still be in play for the Bears. Though, bringing him back could be tougher than originally expected.

Kwiatkoski, 26, has four years of playing experience as a do-it-all linebacker and special teams contributor. He was PFF’s 15th highest graded linebacker in 2019 and its 10th best in 2017 — two years in which he received ample playing time (27 games, 14 starts).

OTC has him projected to get a two-year deal worth up to $6.5 million and guarantees $2.6 million. If that’s what the market bears out, then the Bears shouldn’t have much of an issue bringing him back. But if history repeats itself, Chicago figures to face stiff competition from teams that have a similar need to fill the position, but have more cap space.