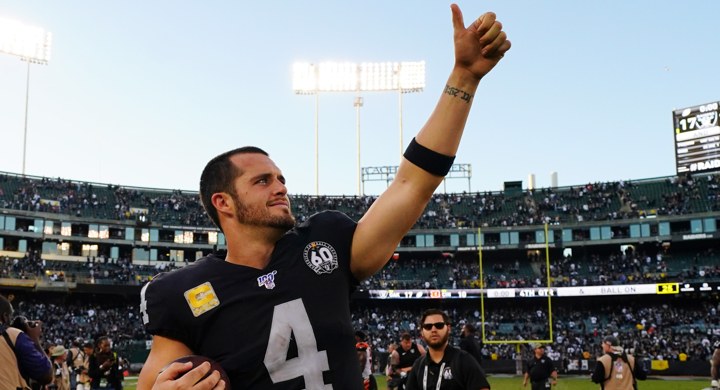 Ah, social media teases. You are the best. Because you could mean so much or nothing at all.

But the timing on this one sure is interesting.

With all kinds of talk buzzing about the Raiders potentially trying to bring Tom Brady to Las Vegas – would you rule anything out for them? – questions linger about what would happen to 28-year-old quarterback Derek Carr in a world where the Raiders go all out for Brady.

It’s no surprise, then, that rumors are swirling that QB-needy teams might come calling on Carr:

FYI: I’m not reporting this to mean @Raiders are actively shopping Derek Carr. But between their pledge to leave no stone unturned to improve at every position – including QB – and the interest in Carr around the league, some teams sense an opportunity to trade for him. https://t.co/pxvp2KP9aG

(To me, that’s a leak from the Raiders basically *inviting* teams to inquire, but hey, I’m just speculating.)

With the Bears obviously in the market to at least consider all available paths to improve their quarterback situation, you can safely assume they would be among the teams kicking the tires on Carr at least in internal discussions (an actual pursuit depends on so many things we can’t know yet – free agency plans, coordinating cap moves, draft plans, any lingering genuine faith in Mitch Trubisky).

So it obviously caught my eye this morning when, immediately after those trade rumors, Carr put this on Instagram with no caption:

Totally random and meaningless? Maybe. But Carr isn’t exactly a daily poster on IG, so it seems at least plausible that he’s having some fun with the apparent tease.

It wasn’t that long ago that the Raiders made Carr the highest-paid player in the NFL, but QB dollars have moved so rapidly that his contract now looks like a bargain. He’s due under $20 million per season for the next three years, and has only $2.9 million total in guaranteed money remaining.

By a number of metrics, Carr had the best season of his career in 2019, continuing his steady development as a QB1: