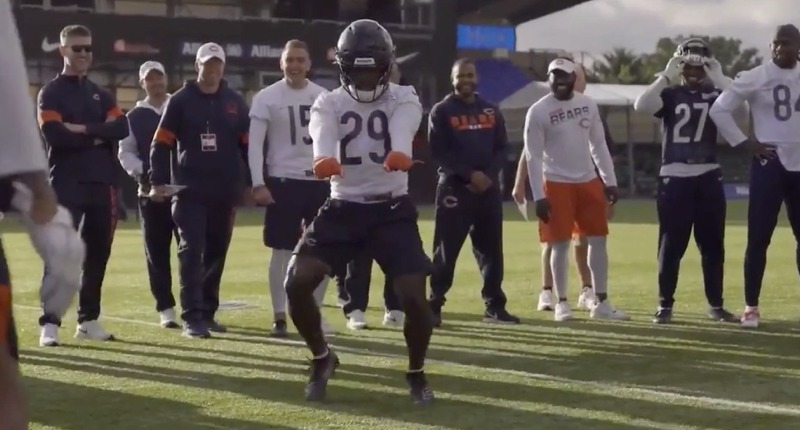 No edits. No filters. Just a man on his patio taking in the scenes of a wind down after an adventure:

My reward for an image that captures the end of a quarantine summer night? Mosquito bites on my ankles.

•   There is no denying Cohen had a rough year in 2019. After a break-through 2018 in which he came through with 1,169 scrimmage yards, scored 8 touchdowns, and was a playmaker out of the backfield and in the slot, Cohen’s 2019 production was worse than what he put together in 2017 as a rookie. Putting up stats that were worse than what he did during the John Fox era isn’t what anyone had in mind for Cohen as he entered his third year as a pro. And as we enter Year 4, I still have hopes he can rebound in a big way.

•   For the record, I don’t have an issue with Cohen running sideways for the boundaries. There are only so many hits a running back’s body can take. That’s why you see the limited career spans of players at that position. And while I’m not an expert on the human body, at 5-6 and 191 pounds (per his Pro Football Reference page), it isn’t too much of a stretch to think there are only so many hits Cohen’s body can take. So if running out of bounds preserves his body and allows him to make one more game-changing play, then so be it. I think things average out in the end. I don’t remember too many people complaining about his running sideways when he was a first-team All-Pro returner and picking up more than 1,100 scrimmage yards in 2018.

•   In addition to not being an expert on the human body, I’m not a running backs coach. That leaves me in a position to be open enough to say I don’t know the intricacies of what Cohen can do to be better in 2020. But what I do know is that if he studies the tape from 2019 and 2018, he’ll see the differences in his decision-making when it came to hitting holes, bouncing it outside, and cutting it back. Every snap, game, and season can be a learning tool to be better. And since it sounds like the Bears are motivated to prove last year was a fluke, I imagine everyone is using the virtual offseason to pour over tape that could help them achieve their goals in 2020. For what it’s worth, I think Cohen gets it. If he does, then Cohen has enough talent and ability to make us forget 2019 was a thing that happened.

•   Brent Sobleski of Bleacher Report highlighted each NFL team’s most intriguing project player, circling Roy Robertson-Harris as that guy for the Bears. Robertson-Harris has seen his playing time grow in each of the last two seasons, picking up 5.5 sacks, 52 tackles, six tackles-for-loss, and 21 quarterback hits over the last two years as a rotational defensive end. The tag team of Robertson-Harris and Bilal Nichols can be problematic for opposing offenses when they’re also trying to slow down Eddie Goldman and Akiem Hicks on the line at the same time. And with newcomer Robert Quinn joining the front seven, it should make for even more opportunities for RRH to attack at the line of scrimmage and make plays in the backfield.

•   Eddie Jackson is gonna get his brothers in the secondary around the league PAID:

This from @RichCimini on Jamal Adams stuck out to me

Adams certainly deserves to shatter that number, but how many teams have flexible payroll like that right now? pic.twitter.com/DERg2tRirw

Check out the one-handed catch that Kindle Vildor makes at the :10 second mark in the video. #Bears https://t.co/gQNeuHUDv1

•   In case you’re unfamiliar with one of the Bears’ 2020 draft picks, you can get to know him better here.

•   I took time throughout the day to listen to the messages from these Bears on Juneteenth:

•   It was only recently when I learned that Fritz Pollard, the first African American Head Coach in NFL history, graduated from Lane Technical High School in Chicago. I, too, attended Lane. That I didn’t connect the dots sooner is a bit embarrassing for me to admit, but I’m here to learn something new everyday. And with that in mind, I share this NFL 360 video titled “Fritz Pollard, A Forgotten Man.”

•   Heads up: the Instant Pot is one of the Deals of the Day at Amazon today, so if you’ve been considering it, today’s the day. #ad

•   Do you think Kyle Farnsworth could be a rotation linebacker?

•   Among the many reasons I’m looking forward to a coaching change with the Bulls is that a guy like Daniel Gafford will get better usage in his role as a high-energy big off the bench:

Daniel Gafford Has the Makings of the League’s Next Sparkplug Big Manhttps://t.co/GudYf4GLc3

All MLB Facilities Shut Down After News of COVID-19 Cases, Testing to Be Required https://t.co/2T3Snmekto pic.twitter.com/pzSrmctfMb