Leonard Floyd to the Rescue? CFB Playoff, Way Too Early QB Rumors, and Other Bears Bullets Skip to content 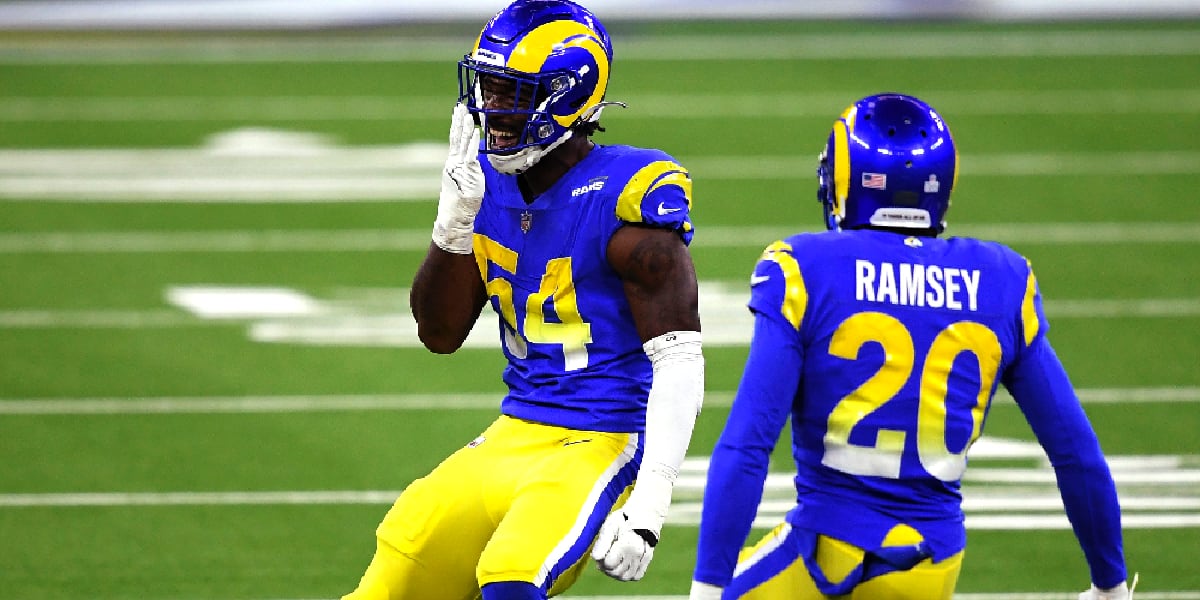 •   The Rams will be without their starting quarterback, lead rusher, and (quite likely) top receiver. But one player who is decidedly ready to show up happens to be an old friend:

•   Leonard Floyd’s breakout finally arrived in 2020. Floyd has collected 9.5 sacks, 18 quarterback hits, and 11 tackles-for-loss in a year in which he appears to have learned some new techniques that allow him to properly leverage those long limbs, his frame, and that speed. Good for him. Floyd will surely parlay this season’s excellence into a well-earned multi-year deal from someone this coming offseason. But first, an opportunity to help his current team and his former mates get into the playoffs. Don’t get me wrong. I think the Bears should handle their own business and not need to lean on on a Rams in to slide into the playoffs. HOWEVER … I like to cover all my bases and like having contingency plans. Rolling the dice with a defense led by Aaron Donald is a heckuva backup plan is all I’m saying.

•   While Floyd enjoys his breakout in Cali, Bilal Nichols is having one of his own in front of our very eyes:

•   The Bears picked Nichols in the fifth round of the 2018 NFL Draft and has seemingly improved every year. Nichols is essentially a three-year starter who has versatility across the defensive line. And while down linemen in 3-4 defenses don’t get the shine they should, Nichols’ play is making it impossible to ignore. He has 5 sacks, 7 tackles-for-loss, and 13 quarterback hits. That’s 3 more sacks than Robert Quinn, 1 more QB Hit than Khalil Mack, and as many TFLs as Akiem Hicks. The guy is doing WORK.

•   At some point this offseason, we’ll likely entertain the idea of discussing extensions for young players on the rise in Chicago. And while Roquan Smith will be at the center of said talks, a Nichols extension is on our short-list based on three years of solid production and a strong second-half push to close the year.

•   Get this man Roquan Smith some All-Pro recognition:

Roquan Smith has been playing outside of his mind this season. No idea what got into him, but the turnarounds in his zone coverage comfort and man coverage stickiness are stark.

Fred Warner and Darius Leonard had made this pick look shaky. Not anymore.https://t.co/T13Xbt5BoN

•   On the other side of the ball, I want to see more David Montgomery:

We went to the tape on David Montgomery & the CHI run game.

.@MontgomerDavid joined #GMFB to talk about the @ChicagoBears Week 17 matchup against the Packers, his 529 rush yards over last 5 weeks, @Mtrubisky10 and so much more!

"One thing I've learned is controlling the controllable. You mess yourself up trying to control what you cant." pic.twitter.com/t0JaEgwDTZ

•   When the ball isn’t going to Montgomery, it should be headed in Allen Robinson’s general direction:

•   Even as an obsessive follower of the football news cycle, I find it absolutely wild that the Bears are simultaneously gearing up for a game that has their playoff lives at stake while also being connected to what seems like an endless wave of future quarterback options. Seriously. Not even Packers Week with postseason implication can slow down future Bears quarterback rumors. It’s equal parts mind-boggling, intriguing, and entertaining. Only the Bears, am I right?

•   No matter if Chicago’s football season ends tomorrow, extends to February, or ends somewhere in between, we’ll have plenty of time to dive into any and all quarterbacking options. In the meantime, let’s put a pin in John Clayton’s prediction that Jimmy Garoppolo will end up with the Bears, Kayln Kahler’s nugget that we keep an eye on the Carson Wentz situation, and Jeremy Fowler’s case for maintaining status quo.

•   I got a kick out of watching Justin Fields last night. Nothing like a much-maligned high-profile prospect showing out on the biggest stage with a 6 (!) touchdown night:

I mean, come on! How long would you be on IR if you took this hit? https://t.co/h2QtN7YdNK

•   So much for that Northwestern game being Fields’ defining moment in college.

What's the scouting buzz on Ohio State's Justin Fields and Clemson's Trevor Lawrence after their meeting in one of the two College Football Playoff semifinals? @MoveTheSticks provides five takeaways on the QB prospects.https://t.co/XQq7q1Afpf pic.twitter.com/nDDoDp1bSE

•   This man jumped over another man:

GET UP NAJEE HARRIS

•   Final score aside, Notre Dame-Alabama went pretty much as expected. The Fighting Irish put together a good team and had a fine season. But Alabama is on another level. And it was clear from the get-go. That ND beat the spread is irrelevant and doesn’t show how “close” the school is to where it wants to be. If anything, it’s something of a cold reminder of how far it still needs to come in order to achieve what it wants.

•   A brief look around the league:

The entire Saints RB room won’t be available tomorrow bc of close contact to Alvin Kamara. Latavius Murry, Burton, Washington, RB coach all out tomorrow @NFLonFOX. They are moving Ty Montgomery to RB and calling up practice squad RB

We will continue virtual meetings as the facility is currently closed while contact tracing is conducted. pic.twitter.com/yGBx62dDe0

Barring any setbacks overnight, #Lions QB Matthew Stafford — listed as questionable with rib, right thumb and ankle injuries — will start Sunday’s finale against the #Vikings, per source. Nothing on the line for Detroit, but Stafford is determined to gut this out.