Nagy's Flops After the Bye, Making a Fool of Romo, Big Money on the Bench, and Other Bears Bullets Skip to content 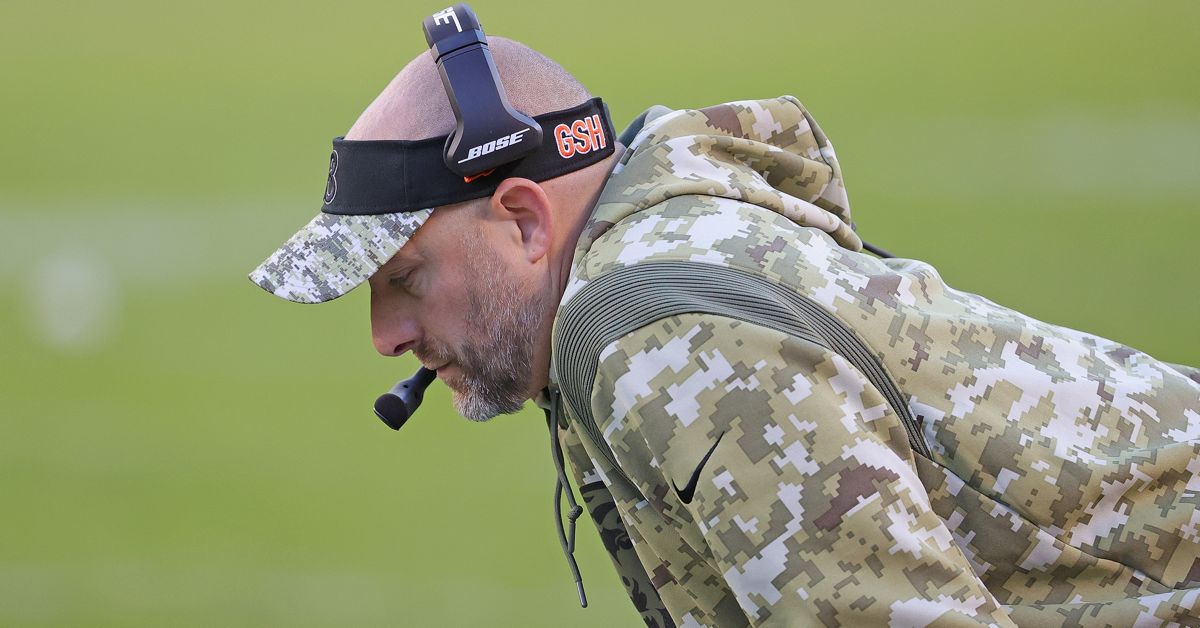 If you put yourself through that Bears game as a fan, then this is your reminder that you should treat yourself to something nice today.

•   And to think. About 24 hours ago, things were looking bright for the Chicago Bears:

Is NFL mediocrity opening a path to the playoffs for the #Bears? Check out their UPDATED post-bye schedule: pic.twitter.com/MKOlb6TZau

•   Again, no one does tongue-in-cheek tweets like the Sun-Times’ Mark Potash. Even still … opportunity was knocking for these Bears. Probably not for a run at the playoffs. But a chance to show that it can build off some things that were working and use the bye week to the team’s advantage. Instead, the Bears laid an egg — seemingly, as they always do after a bye.

•   Chicago’s football team is 0-4 after the bye during Matt Nagy’s time as head coach. Losing to Aaron Rodgers and the Packers in 2020 isn’t acceptable, but sometimes a guy has your number. But the other post-bye losses have come at the hands of a who’s who of making you want to pull your hair out. In 2018, it was Dolphins team that went 7-9, was coached by Adam Gase, and led by Brock Osweiler. It was the Saints sans Drew Brees and Alvin Kamara a year later. And yesterday, a Ravens team that was without Lamar Jackson, Marquise “Hollywood” Brown, and that had lost its top three running back options before the season even began was adding its name to the list.

•   Which unfathomable loss numbs you the most: Losing to Brett Hundley in 2017 or Tyler Huntley in 2021? Or are they about the same, seeing that both (1) came after a bye in a home game the Bears should’ve won and (2) seemingly were representing a moment that made you say “this has got to stop.”

•   Much like that game that served as the beginning of the end of the John Fox era because it displayed an indictment on the coaching staff, this Ravens loss does the same thing for Nagy and his staff. The parallels are uncanny. And on that note, I’ll stop thinking about John Fox coaching the Bears — for my mental health (and yours).

•   As for Nagy, his Bears coaching career can be best compared to an incomplete burned CD. Those of us who are on the older end of the millennial scale remember what it was like to burn a mixtape CD for a crush. And there was nothing work like curating the perfect playlist, setting the CD to burn, and coming back to the computer with the disc being spit out of the drive with a prompt on the screen saying “incomplete” for some unexpected reason. Few things delivered the gut-punch of disappointment like wasting a perfectly good blank CD in the mid-2000s. Watching the Bears yesterday gave me that feeling.

•   Nagy talked a big game upon arrival. And there are concepts in his offense that work, just not with this team. The plays in Chicago are like an incomplete file that corrupts the rest of the disc in that they work when I’m watching other teams run them, but fail in new and spectacular ways when the Bears try them out. Clearly, there is a disconnect that isn’t allowing for a fulfilling ending.

•   Technically, it wasn’t all bad for the offense:

This is in fact a very hard throw but Justin Fields makes it look easy. #BALvsCHI | #DaBears pic.twitter.com/b95HdgMvx9

On the broadcast, Romo said Fields pushed it upfield away from the lurking CB in zone to avoid the INT, and seemed to indicate that Mooney should have adjusted his route away from the defender.

•   Then again, it is telling that the first half offensive highlight was mostly improvisation by Justin Fields and Darnell Mooney.

•   I hate that there was a moment in that game where we allowed ourselves to feel encouraged by what we were seeing from the offense. Even Tony Romo was pointing out how different things were looking compared to when he last saw the Bears in that debacle against the Buccaneers. And then the wheels came off, starting with a shotgun toss sweep that every other offense runs and gains 5, 7, 10 yards. But when the Bears do it, it looks like when Charlie Brown is trying to kick a field goal, only to have Lucy pull the ball from him.

•   On the other hand Romo was fooled into thinking this offense was going places as it was falling on its face:

•   This play is a microcosm of everything that’s wrong with Nagy’s offense:

Tune in on CBS! pic.twitter.com/kpntVehck9

•   Sure, the Fields turnover is bad. He needs to work on ball security if he is to become the QB we think he can be moving forward. But it’s the rest of what’s happening that has me feeling like I’m taking one body blow after another. I watched this play several times and see something new each time. You obviously see the fumble. But watch again, and you’ll see the offensive line collectively struggle at the same time. Do it again, and you’ll notice the predictable hitch routes that Ravens defenders were sitting on and covering like a blanket. It’s almost as if coaching and game-planning matters.

•   In re-watching the game, I noticed CBS did crowd shots showing Virginia Halas McCaskey. And because I did my re-watch late last night, I thought to myself: “I wonder if she watches Succession on HBO and thinks: ‘I hope my kids aren’t running the family business like Logan Roy’s kids.'”

•   This really put some things in perspective:

The cap hits of the Bears' injured/inactive list today:

Those on injured reserve …

•   I wonder if Bears ownership in attendance was watching a sad-looking Soldier Field and wondering if it was better off turning back the clock and playing at Wrigley? Or are they ultra-focused on Arlington Heights? Asking for a friend.

•   The deals will be picking up this week in advance of Black Friday, and the early deals at Amazon include gift cards, binoculars, and more, plus a whole savings section on Alexa devices. #ad

•   Things have been pointing up since the Blackhawks fired their head coach: Makes you think, doesn’t it?

Good morning. The Blackhawks are now only five points out of a playoff spot. 😏

It Was Always Only a Matter of Time for Coby White https://t.co/4IaB9TcGmF

•   An old friend (two both sides of this baseball town) finds a new home:

If you missed it, the Cubs will get a chance to r̶a̶k̶e̶ a̶g̶a̶i̶n̶s̶t̶ get dominated by an old friend this season … https://t.co/zafv2VBUp4