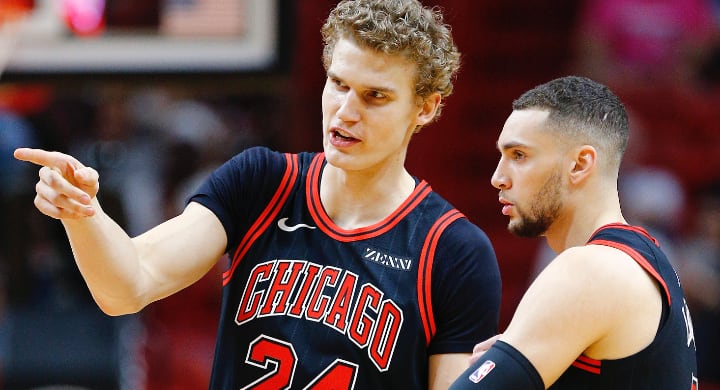 On October 15th, Arturas Karnisovas and Marc Eversley will make their first draft selection as the front office leaders of the Chicago Bulls. Naturally, that pick is expected to land at No. 7 overall, though there remains a 7.5% shot at landing the No. 1 overall slot. Either way, this pick – as the new duo’s first pick – will carry some extra weight.

But not solely because of the ceremonial significance.

The Bulls have a puzzle of young talent on their roster that has yet to be put together, so whomever Karnisovas and Eversley draft could tell us a lot about how they perceive the team’s current players. For example …

What it says: “We’re not confident Coby White is the answer.”

To be sure, after a shortened season with plenty of ups and downs, no one should be *certain* Coby White is the Bulls point guard of the future. I think we can all agree he showed enough promise to deserve a prominent role moving forward (averaged 23.7 points, 4.5 assists, and 3.9 rebounds over his last 11 games). But the question becomes what will this role look like under Karnisovas and Eversley?

If the Karnisovas and Eversley draft a point guard, they’re practically letting Coby White know he isn’t going to comfortably get his shake in the starting lineup. While he may be the guy at the start of the season, he’ll be on the court knowing the bosses’ shiny new toy lurks on the bench. Of course, the 20-year-old could use this as motivation to truly claim his role, but it certainly feels like it could turn into a lose-lose situation of sorts.

Karnisovas and Eversley will likely be eager to see their draft pick rise through the ranks, which could leave White prematurely pigeonholed in the six-man sparkplug role. I know this isn’t the worst outcome – and, in fact, could be a very obvious way for White to contribute meaningfully – but I still think a raw, No. 7-overall pick with White’s level of promise deserves a supported shot at becoming the piece this team needs.

With all that said, this draft does have a couple of intriguing pass-first point guards in Killian Hayes and Tyrese Haliburton. The Bulls have to do their due diligence and evaluate both players, especially since Tomas Satoransky didn’t live-up to the facilitating role he was supposed to play last season. And if the Bulls are hanging around the No. 7 spot, I could see them going in this direction (if not for best available player reasoning alone).

Last thought: I’m aware that many believe the Bulls need a pass-first point guard, with Zach LaVine and Lauri Markkanen on the floor. But what if that’s not the best option available? What if White actually pairs successfully with LaVine (think about poor man’s Lillard-McCollum)? Facilitating can come elsewhere, be it at small forward or center. Coming from Denver where Nikola Jokic is the main distributor, Karnisovas knows this better than most.

What is says: “Screw you, we’re building for the future.”

The only true shooting guard option at the top of the draft is Anthony Edwards, and if the Bulls go this route, color me surprised. Edwards is a straight-up bucket getter, but guess who is one of his most popular NBA comparisons? Yup, Zach LaVine. While this team might need to add wing depth, they sure don’t need to add a scoring guard.

In general, drafting a shooting guard (with Edwards, specifically, in mind) would seem to imply that Karnisovas and Eversley plan to quickly make this roster their own.

What it says: “This is what we need, and we’re building on what we have.”

I’ll be frank (Michael: I’ll be Michael): I want the Bulls to draft a small forward.

I’ll be frank with you again (Michael: Still Michael): That can change between now and draft night.

As we saw throughout last season, this team’s wing depth is suspect at best. Otto Porter and Chandler Hutchison can’t stay healthy for more than a couple of games, and it’s hard to picture either as a part of the organization’s longterm plans. After Porter gobbles up his $28.5 million this season, he’ll likely be out of Chicago for good, leaving a starting spot open for the taking.

Hutchison hasn’t developed into a reliable piece, and it’s hard to imagine he can become anything more than a bench player, which means it might be time to invest in a future starter. Deni Avdija and Isaac Okoro are two small forward who sit in the top-10 of many draft boards. Both offer-up a pretty different skill set, but both hold the potential of a longterm starter. Okoro is an athletic freak who has the ability to become an All-Defensive Team caliber player, while Avdija is a solid all-around player with elite size and impressive court vision.

Overall, if the Bulls draft a small forward, it’ll probably be the only way we see don’t see this rotation muddied-up. The pick will likely be the off-the-bench replacement for a healthy Porter and eventually move into a starting role. Meanwhile, we’ll continue to see what these other young Bulls pieces have in store for us. Works for me.

What it says: “The pressure is on, Lauri.”

Like shooting guard, there is only one real option at power forward in the high lottery: Obi Toppin. But, of course, there is always a situation where the Bulls trade down and land a power forward with their first pick of the draft.

Regardless of whom it may be, this will likely raise a lot of questions internally about where Markkanen and the Bulls currently stand. The selection would definitely make it feel like this new organization isn’t sold on The Finnisher, especially if it’s combined with shaky extension talks this offseason.

I can’t say I would be baffled if it happened, but based on previous comments by Karnisovas and Eversley, it feels like they’re ready to invest their time in fixing Lauri Markkanen. And with that being the case, it’s hard to picture them drafting a possible replacement.

What it says: “We can only keep one: Lauri or Wendell.”

I’ve actually started to see this more and more in recent mock drafts. I’m not at all sold on the idea, but with all the hype around James Wiseman and Onyeka Okongwu (who could actually be more of a PF), it’s something the Bulls have to think about.

Wendell Carter Jr. has suffered his fair share of injury trouble over his first two seasons in the league, which is certainly worth some concern (even if the injuries aren’t expected to have longterm consequences). Additionally, he is undersized at his position and has expressed a clear interest in playing more power forward in the future.

Perhaps that wish would be granted if the Bulls go this route in the 2020 NBA Draft. Selecting a center would likely mean Karnisovas and Eversley are prepared to blow up the frontcourt combination of Markkanen and Carter Jr. altogether. Either one player would eventually move to the bench or be dangled in the trade market.

I’m not sure if this selection would say more about Carter Jr. or Markkanen, given the circumstance. For instance, Karnisovas and Eversley may want to try giving Carter Jr. more of a chance to spread the floor. At the same time, who’s to say they don’t see more upside in Markkanen longterm than Carter Jr.?

All in all, this would make for one heck of an interesting and juicy storyline.

Final Note: The team will likely go for the best player available approach, but I don’t think that necessarily means what’s pointed out above is irrelevant. No matter the position that BPA ends up being, a new young piece will be added to the equation. Thus, many of these questions and messages sent could still hold true.