Steve Phillips is an Idiot, and Lou Piniella 'Bout to Drop Some Knowledge Skip to content

Phillips recently picked the Chicago Cubs to win the World Series in 2009, but Cubs fans will forget that quickly now that he and Cubs manager Lou Piniella have become very anti-BFF over comments Phillips made about Piniella’s handling of Kosuke Fukudome.

A rare gaffe for the otherwise brilliant Phillips.

“My view is Lou doesn’t have a great deal of patience for assimilation into culture, assimilation into the team,” Phillips said. “He is just not the most patient guy around, and he tends to verbalize his frustrations in an angry way. I think that may have affected Fukudome a little bit.”

Not overly harsh, but dripping with stupidity. Lou’s patience – or lack thereof – had nothing to do with Fukudome pulling off of EVERY outside pitch and completely forgetting that it is legal to hit the ball the other way.

Fukudome fell off the map, performance-wise, beginning in late May, and never recovered – that’s four full months of suck. If that was because of Piniella’s attitude, then Fukudome was never going to make it in MLB anyway.

“I don’t have much respect for Steve Phillips,” Piniella said after hearing the comment Monday. “Let him be around a little more and see what transpires before he makes assumptions. I’ve lost total respect for this guy. If he had something to say, let him say it to me.” 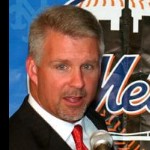 Dude. I don’t want to read too much into it, but I think Lou just challenged Phillips to a fight.

And Lou is right. Phillips’ comment presumes a WHOLE lot of knowledge of the inner workings of the Cubs clubhouse that no one not in that clubhouse – other than me, of course – is going to know anything about.

Phillips is paid (sigh) to comment on baseball, so I don’t blame him completely for coming up with something to say. But hopefully he wasn’t shocked when Piniella came back with some knowledge, and welcomes the correction.

Phillips could use a little.