Albert Pujols Not Long for the Cardinals? Skip to content 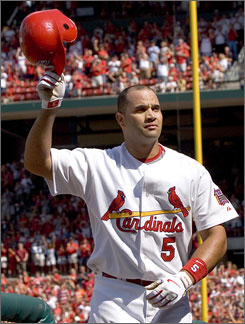 Albert Pujols enters 2011 as the most-anticipated soon-to-be free agent since… LeBron James? Hard to come up with a comparison, to be honest. And yet, while everyone buzzes about future free agent first baseman like Prince Fielder and Adrian Gonzalez, you rarely hear a peep about Pujols, whose career dwarfs either of the others.

The reason is unsurprising: everyone assumes that Pujols – who loves playing for the Cardinals – isn’t going anywhere. The two sides have informally discussed an extension for what seems like years, and it is a foregone conclusion that Pujols will don Cardinal red for the rest of his career.

In an interview on 550 AM in St. Louis on Friday, the St. Louis Post-Dispatch’s Joe Strauss speculated that the chances Pujols returns on an extension is less than 50%. While he’d previously thought the chances were upwards of 75% (which, even that seems newsworthily low), his opinion has shifted for unknown reasons.

Pujols, who will be just 31 (probably) next winter, could conceivably command $25 million a year on a six to eight-year deal on the open market, but resigning with the Cardinals almost certainly means something lower.

The Chicago Cubs – who could be looking for a first baseman in 2012 – would certainly consider making a run at Pujols, despite the terrible taste he’s left in Cubs fans’ collective mouth over the last decade. Whether they’d have the funds to make a move, however, remains to be seen. At least three big contracts will be off the books by then: Aramis Ramirez, Kosuke Fukudome, and Carlos Silva.