Cubs Planning to "Baby" Arodys Vizcaino in 2013 Skip to content 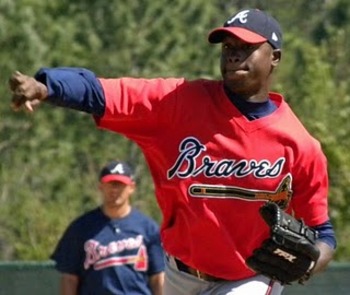 One of the most prominent story lines of the second half of the season in baseball has been the shutdown plan for Stephen Strasburg. The electric righty – the best pitcher on the best team in baseball for most of that stretch – had Tommy John surgery back in August 2010, and pitched just a bit in late 2011. He was mostly full-go in 2012, but the Nationals announced, early in the year, that his innings would be capped, regardless of how he or the team was doing. The cap came a few weeks ago, and Strasburg was, indeed, shut down.

Criticisms and compliments flew about the Nats’ plan to try and protect Strasburg’s arm. Some said it was a credit to GM Mike Rizzo, for being able to stick to his guns despite the fact that playoff appearances are never guaranteed, let alone possible World Series appearances. Others said the Nats were babying Strasburg, and there was no evidence that you could prevent arm injuries in this way.

This post isn’t actually about Strasburg, but is instead about the Chicago Cubs’ 2013 plan for top pitching prospect Arodys Vizcaino. The 21-year-old righty, acquired in a deal for Paul Maholm and Reed Johnson in July, underwent Tommy John surgery back in March, and has recently been throwing on flat ground. He is expected to be ready to throw competitively by Spring Training, but few expected him to pitch a full season’s worth of innings in 2013.

And it sounds like the Cubs feel the same way.

“He’s going to come into Spring Training probably ready to pitch, but it will be on a [plan],” Cubs manager Dale Sveum said of Vizcaino, per CSNChicago. “Definitely we’ll be babying him through everything. I’m sure his innings will be whatever next year – 100 innings – I don’t know the exact number we’re going to end up with. It’s not going to be a full, blow-out scale with him next year.

“He’s so young and everything you’re going to baby that situation as much as you can, and have him really, really ready for the next season.”

There is a bit of a pejorative flavor to using “baby” and “pitcher” in the same sentence, but I certainly won’t say this is the wrong plan. Not only are the Cubs not expected to be competitive in 2013, but pitchers are rarely as effective in the year after Tommy John surgery as they are two and three years after. In other words, it’s not likely that the Cubs will be losing out on a whole lot by taking it very easy with Vizcaino, who has had other arm issues in his young career, beyond the big one.

What form the plan will take will be very interesting. To be candid, I would be surprised to see Vizcaino throw all of his 2013 innings with the big club. It isn’t just a matter of effectiveness (he might not be effective), but there are also service time considerations (I know, it’s icky to say it, but why waste a guy’s controllable, cheap service time when he’s doing glorified rehab?) and development considerations (he’s just 21, and still has plenty of developing left to do – plus, there’s still the question of whether he’s a starter long-term, or a reliever).

So, I’d tentatively expect him to break camp either with AAA, or in extended Spring Training. From there, if and when he does make the big club, I’d think – if he’s starting (I expect the Cubs to give him every opportunity to succeed as a starter) – he’ll be making shorter outings, rather than having outings skipped. In other words, I’m not sure the Cubs will stretch those 100 or so innings over a long season. Most thinking on pitcher health says it’s better to have a guy pitch straight through on normal rest for each start, rather than continuously shutting him down and ramping him back up with skipped starts. You can skip a day or two (as the Cubs did with Jeff Samardzija several times this season), but it’s probably not best to skip entire turns unless the guy is dealing with soreness or an injury.* If things play out that way, we might see Vizcaino starting with the big club for just a couple months in 2013.

It’s exciting to have a young arm like Vizcaino in the system, but it’s important to know that he’s coming back from arm surgery, has had other arm issues in the past, will be limited in 2013, and might suffer from bouts of ineffectiveness next year as his new tendon strengthens and his arm gets back into competitive shape. We’ll all just have to remember that as we watch the Cubs “baby” him.

*Then again, not everyone – including team medical professionals – thinks the same way. Pitcher health is among the most debated and mysterious parts of the baseball experience, even to this day. See, e.g., the Strasburg debate. Very smart, well-educated folks still disagree on this stuff.