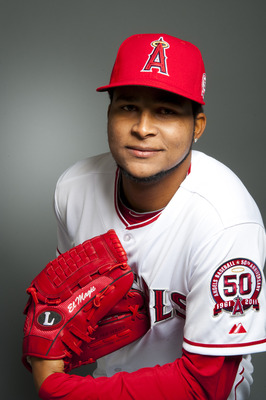 Sure enough, as speculated earlier in the week, and then suggested today by Ken Rosenthal, the Angels found a taker for pitcher Ervin Santana on the eve of having to make a decision on whether or not to pick up his $13 million option for 2013.

Fortunately or unfortunately, depending on your perspective, the taker wasn’t the Cubs. The Angels just dealt Santana to the Royals for relief prospect Brandon Sisk. The Royals are calling Santana an immediate upgrade to their rotation, which probably says more about their rotation than Santana, who is better viewed as a flyer.

Also as expected, Sisk is a borderline non-prospect – he’s a 27-year-old relief pitcher who hasn’t yet cracked into the bigs. He has decent numbers, and could be a middle relief contributor for the Angels, but that’s not much for Santana.

Of course, that’s what was expected – the Angels were about to get nothing for him, so they snagged a middling borderline prospect for him. For their part, the Royals give up virtually nothing, and get a very expensive one-year deal on Santana ($13 million). Given that the price was merely Sisk, who does not appear to be in the Royals’ top 20 prospects, I’m a little disappointed the Cubs didn’t make a better offer. I suppose it’s unfair to assume that the Cubs were willing to use a rotation spot on the chance of Santana bouncing back – they might prefer other similar targets – but you gotta strike when you can, and this was do-able.

The upside here is that the Royals acquiring Santana – a decidedly middle tier type starter – could help reduce the market slightly for that level of pitcher, which is expected to be the Cubs’ primary target level.

The Angels have a little longer to make a move on Dan Haren, whose option decision isn’t due until Friday night.