Remember Chris Carpenter? The Red Sox Have DFA'd Him, and the Cubs Are Interested Skip to content 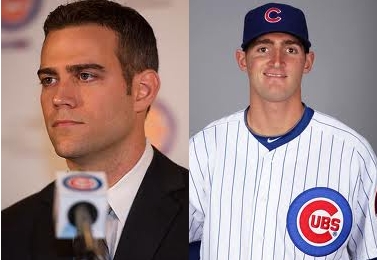 At this time last year, we were still mired in the Theo Epstein Compensation Saga. When the Cubs hired Epstein away from the Red Sox in the Fall of 2011 – to a promotion that was unavailable with the Red Sox (even a year later, I feel compelled to underscore that point) – each side agreed that, because Epstein was still under contract with Boston for one more season, the Cubs should send the Red Sox some compensation for the hire.

I’d originally heard that Cubs relief pitcher/prospect Chris Carpenter was going to be the compensation, but then reports out of Boston had the Red Sox asking for a crazy variety of pieces – Starlin Castro? Matt Garza? Insane. Brett Jackson? Trey McNutt? Only slightly less crazy (at the time). So the two sides fought a private battle for the better part of four and a half months before agreeing on Carpenter and a PTBNL, who turned out to be relief prospect Aaron Kurcz.

Kurcz was a nice young relief prospect, but Carpenter was clearly the centerpiece. He left for Boston during Spring Training, and shortly thereafter developed (or discovered) bone spurs in his elbow, which mostly derailed his 2012 season. He managed just six innings at the big league level, and 21.2 innings over various minor league stops (during which he pitched quite well). And now, to make room for Mike Napoli, Carpenter has been designated for assignment by the Red Sox. They will have 10 days to trade, release, or waive him.

He can still bring the extreme heat, and remains an interesting bullpen pitcher, on whom some team will take a chance if those bone spur issues are behind him.

Well, according to a source of Bruce Levine’s, the Cubs would indeed be interested in bringing Carpenter back if he’s waived by the Red Sox. I’m going to assume, however, that the interest is on a minor league deal if Carpenter clears waivers, and becomes a free agent (and if he’s never been outrighted off the 40-man roster before, he becomes a free agent after clearing waivers only if the Red Sox don’t want to keep him). The Cubs’ 40-man roster is currently full – indeed, they still need to clear a spot for Carlos Villanueva – and they are loaded with bullpen options. If Carpenter is interested in returning on a minor league deal with a Spring Training invite, however? Sure, why not add him to the Wade/Lewis/Carpenter (Andrew)/Takahashi crew of competitors.

Given his raw ability, however, it’s fair to wonder whether Carpenter would clear waivers. And, even if he did, he might be able to find a team with which he has a slightly better chance of making the big league club out of Spring Training.