I've Never Watched 'The Amazing Race' Before Skip to content 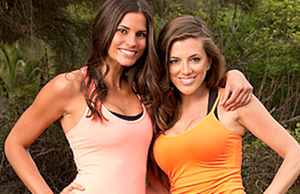 It’s not to say I’m opposed to reality TV or competition shows or even CBS (BN True Confessions: The Wife and I are huge ‘Big Brother’ fans), but I’ve never watched ‘The Amazing Race.’ Some folks are really into it, and the concept – traveling the world, solving stuff, doing stuff, in a big race – sounds acceptable enough. It’s just never caught my eye.

It has caught my eye.

The show is made up for two-person teams, and one of the teams on this year’s installment features none other than Kim DeJesus, the spouse of former Cub David DeJesus. She has become something of a cult hero in recent months among Cubs fans, so I’d think this news would be greeted with some smiles.

Kim is paired with fellow baseball wife Nicky Getz (Chris Getz’s better half). Presumably Kim is as fun on TV as she is on Twitter, thus making her airtime enjoyable.

The 23rd installment of ‘The Amazing Race’ premiers on September 29, and I will tune in for at least an episode or two just to see what’s what. It has already filmed, but it’s very secretive on how the DeJesus/Getz duo fared.