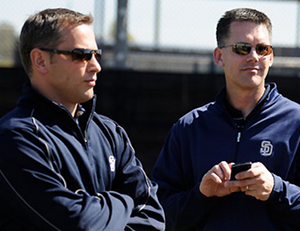 While Joe Girardi is the most visible and maybe most desirable managerial candidate on the Chicago Cubs’ list, this front office won’t be caught with its pants down. Whether it’s a true Plan A, Plans B/C/D situation or not, the Cubs will have a number of candidates in mind as they go through this process.

We’ll discuss a number of those candidates this week, I’d think, and Ken Rosenthal reports that one of the guys on the list is former Diamondbacks manager and current VP of pro scouting for the Padres A.J. Hinch.

Hinch, 39, was brought into the Padres’ organization in September 2010 to head up their pro scouting department by then-GM Jed Hoyer. Before that, he’d served a little over a year (two partial seasons) as the manager of the Arizona Diamondbacks. Record-wise, he wasn’t very successful in that role, given that the Diamondbacks finished 89-123 in the games he managed. As it was with Dale Sveum and the Cubs, you could make the argument that it was a transitional period during which Hinch may not have been responsible for the record. After all, Kirk Gibson relieved Hinch halfway through 2010 and proceed to go 34-49.

Hinch’s connection to the Cubs’ front office actually pre-dates his time in San Diego. Before managing the Diamondbacks, Hinch was that organization’s farm director (so his background is very much on the player development side, though he now perhaps focuses on big league scouting). There, he was close with GM Josh Byrnes, who had formerly worked in the Red Sox front office with none other than Theo Epstein and Jed Hoyer.

Before his front office life, Hinch was a big league catcher, with a career OPS+ of 65. Good thing that doesn’t matter. At all.

On paper, this is a match. Whether Hinch is a quality candidate for the Cubs’ gig is a separate question. He does, however, check all of the boxes, insofar as he’s a guy with managerial experience, as well as a great deal of experience developing young players at both the major and minor league level.