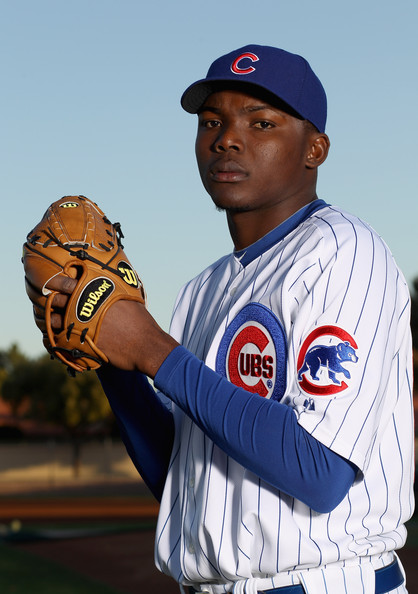 Baseball America has helpfully collected and catalogued all of the players who qualified for minor league free agency this year, and you can see the fruits of that labor here.

For the Cubs, specifically, the current free agents are:

As you can see, there is no one who jumps out as a guy you’d be crushed to see depart – that tends to be the case with minor league free agents, given that they’d previously been bound to their original team for at least six years, or were released sooner – but there are some interesting names. The one that should jump out at you is Rafael Dolis, a promising reliever who saw time with the big team over the last few years (mostly in 2012), but who struggled with control before an arm injury derailed him this year. The Cubs can keep any of these guys by placing them on the 40-man roster, but that isn’t likely to happen, even in Dolis’s case. Instead, if the Cubs hope to retain him, they’ll try to negotiate a minor league contract. (I can still see that effortless, hard sinker … and dream.)

Putnam was another promising reliever, but bone spurs ended his 2013 season and took him off the 40-man roster. Castillo pitched well in his first year in the organization after being a minor league signing (from the Red Sox organization) last year. We’ll see if the Cubs are able to bring them back.

The Cubs acquired Rodriguez last year in a trade, but his persistent control problems, well, persisted. He’s got a huge arm, and some organization will be happy to keep trying to harness it. Maybe it’ll be the Cubs, but maybe it won’t.

Burke and Chavez are pitching converts, though Burke’s been at it for a couple years now. He’s got a good arm, but he hasn’t yet advanced past High-A at age 25.

All in all, I wouldn’t expect to see too many of these guys return as the organizational churn continues.

Speaking of which, if you’re perusing the BA list for possible future Cubs signees, I’d look no further than the pitcher and catcher ranks, as that’s where the Cubs are most likely to be nibbling.