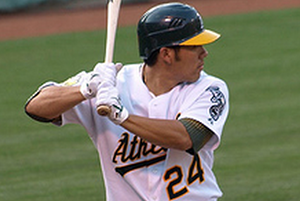 Although there have been a proliferation of rumors connecting the Chicago Cubs to the bigger catching names in free agency, I have remained of the mind that the Cubs will be content to devote scare resources elsewhere. Welington Castillo has emerged as a fine, cost-controlled starter behind the plate, and the Cubs simply need to complement him with a quality, veteran back-up. (The Cubs could also stand to add a quality depth catcher or two at AAA while they’re at it.)

In that vein, Patrick Mooney reports that the Cubs are looking at veteran backstop Kurt Suzuki. The 30-year-old is a free agent after spending the last two years splitting time between the Nationals and A’s. Never a big stick, Suzuki was once an above-average offensive catcher, but those days seem to be far behind him with back-to-back sub-75 OPS+ seasons. Worse, he hasn’t seen his OBP over .300 since 2011 (and, even then, it was just .301, with a .303 mark the year before).

But you aren’t getting Suzuki for his bat, as is the case with most back-up catchers. He’s considered a quality defender behind the plate, and a good presence both with the pitching staff and younger players. At a minimal price, there would be nothing wrong with bringing Suzuki into the fold. Welington Castillo had minor knee surgery following the season, so maybe there’s all the more reason to make sure there’s a quality back-up in place.

Mooney’s piece also digs into why Dioner Navarro is unlikely to return to the Cubs after his huge 2013 season, complete with thoughts from Theo Epstein on the subject.