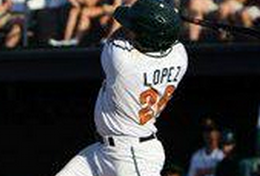 If we were to assess the strengths and weaknesses of this farm system (and we will do exactly that next year), one of the weaknesses would no doubt be at catcher. There is very little debate on that subject.

There is also very little debate that Double-A is effectively one phone call from the majors. If a player is doing well in Double-A, that player is considered to be on the list of options for the major league team even if the team opts to leave him in the minors for awhile for additional development.

The Cubs, who are weak in catching, had a catching prospect who did so well at Double-A Tennessee this year that he was named to the mid-season All-Star team. At first glance it seems that something is not adding up. This edition of Prospects Progress will take a look at Rafael Lopez, the catcher in question, with the goal of figuring out just what sort of prospect he is.

The value in Lopez depends almost entirely on which stats you prefer to look at. We’ll start with an easy one – age. Lopez was 25 this season (he turned 26 in October), and that is on the old edge of Double-A. On the other hand, given that he was drafted in 2011, spending an entire season in Double-A in just his second full season as a professional isn’t too shabby. At age 26 next season he’ll be considered on the older side in any league but the majors, but at least a part of that is due to when he was drafted. I can’t really argue with the pace at which he has moved through the minors, and I can’t really argue with the Cubs leaving him for a full season in Double-A. We should be cognizant of the age, but I don’t think this is a case where we should condemn him based on nothing but his birthday.

So let’s move on to the slash line (BA/OBP/SLG). Over 95 games and 367 trips to the plate Lopez posted a line of .247/.350/.392. How you view that line is going to vary depending on where you stand in the ongoing stat debates. If you think that batting average is still one of the best measures of a player’s ability at the plate you’ve probably dismissed Lopez already. On the other hand, if you’re in the on base percentage camp you are likely a little intrigued. I think we can all agree, though, that a slugging percentage of .392 is less than ideal from a catcher.

There is one other thing I should mention before we go any further. Lopez is a left handed hitter. He throws right handed, no worries there, but he hits lefty. And, at 5’9″ 190 lbs, I don’t think he is ever going to be a significant slugger.

That’s right, the catching poor Chicago Cubs have a Double-A All-Star catcher who posted a wRC+ of 118 and batted left handed. Surprise!

I like what I have seen of his work behind the plate as well. He appears to handle pitchers very well, and while his receiving could still use a bit of work, I think he should be above average in that department when he arrives.

That said, I am not all that high on Lopez. He has yet to make his first Bleacher Nation Top 40 list, and even though I am higher on his stock today than I have ever been he is no lock to make it when I write those articles next year. There is a lot to like with Lopez, but he is not a high ceiling guy. What we see now is pretty much what we can expect from him.

What Can We Expect?

Let’s start by talking about what Lopez is not. He is most definitely not a challenger for Welington Castillo‘s job behind the plate. He isn’t an impact bat, a future major league All-Star, and probably not a Gold Glove catcher either. He isn’t a major source of power, likely to hit for average, or anything resembling speedy on the base paths. (That said, in one game that I watched the opposing team worked harder to try to pick off Lopez than the rest of the Smokies combined. He was not taking excessive leads and his footwork looked fine to me, so I tend to doubt they thought they had an easy pick off candidate. I have no idea what they were doing, but they made easily 15 throws to first to try keep the catcher close while letting faster guys like Matt Szczur and Arismendy Alcantara run rampant on the bases. Go figure.)

But he is left handed, a patient hitter who can earn a walk, and one who does not give away too many at bats via the strikeout. His overall OPS is just .742, but that climbs to .811 against right handed pitching. As a back up catching prospect, even give the age concern, I like what I see. I’d like to see him get a taste of Triple-A before moving him on to Chicago, but I would not be at all surprised if the Cubs deem him ready to become Castillo’s backup by late summer. And, ultimately, I think that is his future. If he continues to maintain a quality BB%, a good OBP, and continues to improve his game behind the plate, then I think I think he will eventually earn a chance to become the second catcher for the Chicago Cubs.

Lopez should join Iowa as the primary catcher in 2014, if not immediately (thanks to all the minor league veterans the Cubs have signed) then soon thereafter. While in Iowa I suspect he will continue to post some pretty good numbers. It is possible that his patience and the tiny ballparks of the Pacific Coast League will combine to spike his SLG quite a bit, but should that happen it will almost certainly be just a mirage. Lopez is not a slugging catcher. He’s an on base percentage and good glove catcher. If those skills hold up in Iowa he should one day be a major league backup catcher as well.