Ryan Braun Isn't Here to Talk About the Past, and Other Things We've Heard Before Skip to content 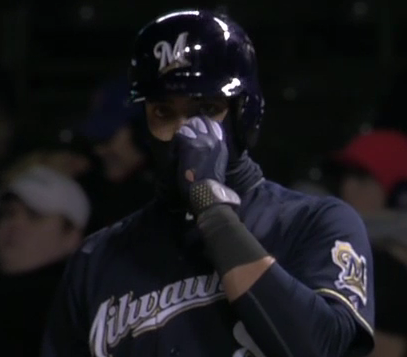 Months after he was suspended for his connection to the Miami clinic that allegedly distributed performance-enhancing drugs to a handful of MLB players, and a couple years after he tested positive for a banned substance (and proclaimed his innocence after an arbitration victory), Ryan Braun is finally discussing the entire mess.

Understandably, folks have a lot of questions for the MVP who tested positive, won an appeal on a technicality, lambasted everyone else in a victory speech … and then later accepted a significant suspension for PEDs. Today, Braun met with the media and answered, um, not really much of anything.

The Milwaukee Journal Sentinel has the full transcript, in which Braun says some variation of the “I’m not here to talk about the past” that Mark McGwire popularized before Congress, or something like “I am not going to go into details,” to deflect a question 11 times. He has apparently discussed things with the specimen collector he previously buried publicly (and privately by, among other things, suggesting the collector was a biased Cubs fan, according to at least one report), so maybe there’s something minimally laudable there.

A small,f exemplary selection from the impromptu media session:

Knowing you got away with a positive test, why did you have that news conference in Maryvale where you lied and essentially threw [specimen collector Dino] Laurenzi under the bus?

“I’m not really, again, going to get into too many specifics. I wish that I hadn’t done the press conference. It was a big mistake. I deeply regret having done it, and a lot of the things that I said that day. But again, all I can do is move forward, and in an effort to do that I’m not going to get into too many specifics. I really don’t think that it does anything too positive or productive for me, the team, the game of baseball or anybody else. And in an effort to move forward, I’m not going to discuss that subject.”

Don’t you think you owe everybody to talk about the specifics?

“Yeah, I completely understand where you guys are coming from and a part of your job is to ask those questions, but I hope that you guys can understand and respect that in an effort to move forward that I’m just not going to continue to discuss that stuff.”

No one can force Braun to reveal more details about what actually happened with his original positive test and with his subsequent suspension for the Miami clinic stuff. Just as no one can force fans to forgive Braun and move past all of this without more disclosure. That’s probably just the way it’s going to be for the rest of Braun’s career.